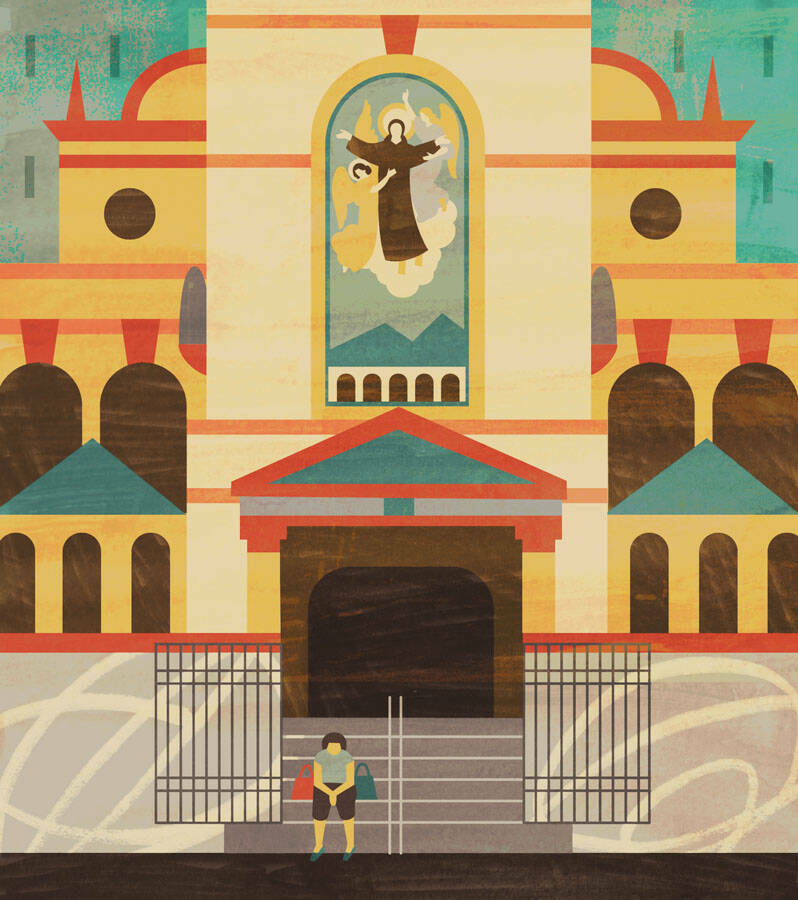 I still remember vividly the encounter, even though it happened nearly 30 years ago. I was walking down West 31st Street in Manhattan when I spotted St. Francis of Assisi Church. Even though my faith had slid into near-nonexistence, I entered the church. I sat in silence for about 15 minutes before deciding to leave. When I reached the back of the church, I dropped a few coins into the alms box affixed to the candle stand. The sound of clinking coins echoed throughout the church. I lit a candle and said a prayer that still somehow had the power to give me goose bumps: “Hail Mary, full of Grace, the Lord is with you. Blessed are you among women, and blessed is the fruit of your womb, Jesus. Holy Mary, Mother of God, pray for us sinners, now and at the hour of my death. Amen.”

I opened the church door and paused long enough to give my eyes a chance to adjust to the sunlight. As I went down the stairs, I noticed a homeless woman sitting on the bottom step. Next to her were two shopping bags containing presumably all she owned. I walked past her and started toward Eighth Avenue, giving her hardly a thought.

For some reason I turned and looked back. Maybe I was in a state of grace. I glanced at the woman, then looked up at the mosaic of St. Francis above the door. His eyes seemed to be staring at me. I thought I heard him say: “How could you just walk past this woman as if she were invisible? Please help her.” I instantly recalled a nun in grammar school telling us how St. Francis considered indifference to the misfortunes of others to be the greatest of all sins. A Franciscan priest later stated it more clearly: “You touch God when you touch others.”

I knew what I had to do, and I had no choice but to do it. I walked back toward the woman and sat down on the step next to her. She seemed surprised, but she smiled at me.

I was at a loss for words. Before I could say anything, she said, as she gestured back toward the church, “I hope God answers your prayers.”

I replied, “He hasn’t so far. In fact, I’ve given up waiting for God to answer my prayers.”

She looked directly into my eyes and said, “God may not come when you want, but he is always on time.”

Great. A lecture about God from a homeless person, just what I needed. I didn’t respond. It wouldn’t have done either of us any good if I told her that the word “God,” despite what that nun told us in grammar school, was coined to describe what comes after life. Everyone prefers the idea of God to the inconceivable: that someday we will cease to exist and that after death there is nothing, I thought. God’s job is to grant us endless time in the next life, but God is never on time in this life.

We sat in silence. I became uneasy and began to question the wisdom of sitting next to the woman. Just as I was about to get up, she reached into her bag and pulled out an old envelope with a rubber band around it. “Do you want to see pictures of my family?” she asked.

She slipped the rubber band onto her wrist. She took out about 20 old, faded, torn photographs plus some holy cards of Jesus and Mary. She showed me each picture. When a painting of the Blessed Mother came up, I made a joke about her being related to the Virgin Mary.

She poked me in the side with her elbow, saying, “Don’t be silly.”

I smiled. She smiled. As I looked at the pictures and listened to her description of each one, I couldn’t help but notice her terrible body odor. It must have been weeks since she had washed or bathed. I tried to guess her age. It was hard to tell, but based on clues from the pictures, such as clothing styles and an old, black Ford that had to date back to the early 1940s, I figured she was about 60 years old. Where had all the people in the photos gone? How did she wind up alone and homeless? There would be no answers.

After she finished showing me the pictures, I asked if she was hungry. She was. I told her to wait and I would return with my car. She looked puzzled but said she would wait.

Ten minutes later, I pulled up to the front of the church. I flung open the passenger-side door and said, “Get in; I’ll take you for something to eat.”

She grabbed her bags and got into my car. The stench was overwhelming; I almost gagged.

Where was I going to take her? I didn’t have a clue. After driving a few blocks, I spotted a Chinese takeout. Luckily there was a parking spot right in front, which in Manhattan can be classified as a miracle.

As I reached for my wallet to give her some money, she said, “They won’t serve me.”

We entered and were greeted by stares. The man behind the counter said, “Can I help you?”

“Yes, you may,” I answered. “My friend wants something to eat.”

The woman seemed confused by the variety of foods from which to choose. She pointed to a pan of fried rice. She also wanted wonton soup and an egg roll. I paid the bill, and we got back into the car. She tore open the cartons and attacked the food as if she hadn’t eaten for days. Rice was flying all over the front seat. She said nothing. I just watched as she devoured the meal. She finished in less than five minutes.

She turned to me, smiled, and said, “How about some coffee?”

“Sounds great,” I said, as I started the car and headed for a nearby deli. I double-parked and told her to wait.

As I walked toward the deli, she opened the window and shouted, “Get me some extra sugar — please.”

We sat and drank the coffee. She talked about things I can no longer recall. When we finished the coffee, I said, “Listen, I gotta be going. May I drop you off any place special?”

“Yes,” she said. “Could you take me to the Port Authority Bus Terminal. I’d like to visit with some of my friends who hang out there.”

We drove in silence, neither of us knowing what to say. I wondered about something I had read a few weeks earlier claiming that 5,000 people lived in the vast system of subway tunnels beneath New York City. This dim netherworld must have seemed safer to many homeless persons than the streets or the shelters, despite the rats, insects, police sweeps, disease and criminals that were part of life down there. Five thousand human beings!

Could this woman be one of them? I pulled up to the terminal. She got out of the car, thanked me and disappeared into the crowd. The odor lingered. As I made my way uptown, I cleaned up grains of rice at each traffic light.

I felt better than I had in years. I had done something real, something worthwhile, something good. For the first time in my life, God was tangible. That Franciscan priest was right. I touched the life of a homeless woman, and God had touched me.

Gerard Thomas Straub is the author of The Sun & Moon Over Assisi, named the Best Spirituality Hardcover Book of 2001 by the Catholic Press Association. He runs a home for abandoned children, Santa Chiara Children’s Center, in Port-au-Prince, Haiti: Visit santachiaracc.org.