“Notre Dame has had so many great legends and great men.”

A lot of them are looking down on me as Jim Augustine of Augie’s Locker Room tells me this. On every shelf in Augustine’s shop, each of them about as full as a Notre Dame parking lot on game day, are pictures and busts of legendary Fighting Irish personalities ranging from Joe Montana to Father Hesburgh. 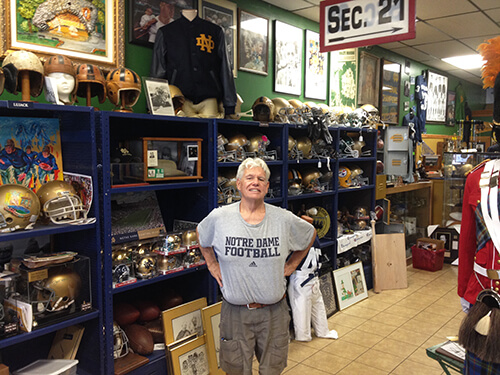 One face, Knute Rockne’s, appears more often than any other in the store on State Road 23, due east of Notre Dame Stadium. The coach is a clear favorite of Augustine, who started collecting Notre Dame memorabilia as a “little boy” in the 1950s when his father began taking him to games.

“And I never stopped,” he says.

But why, I ask, making it clear that I am from Europe and should be forgiven for not knowing, is Rockne such as big deal?

“In 1913 he and [quarterback] Gus Dorais practiced all summer to develop the forward pass in order to beat Army. And they did. He was the most innovative coach of his time. His winning percentage was the greatest,” Augustine explains.

But it’s not just about football. Augustine ascribes much of the University’s appeal to prospective students to Rockne, who more than anyone else made Notre Dame football the great institution that it is.

“I think it needs to be pointed out that Rockne did all this for South Bend,” he says. “Because of Rockne’s success the school could afford to build dining halls, dorms and Rockne’s stadium.”

Augie’s Locker Room is all about remembering. Despite the vast amount of collectibles in this relatively small store, Augustine remembers not only where everything is but also exactly what the story is, even for things that I never thought would have a story.

Such is the case with an old wooden board he shows me. It’s a seat from the stadium, and the burned-in seat number is there because that’s how Knute Rockne wanted it to be done. He also wanted the seats to be 18 to 20 inches wide for better comfort, but the University wanted them to be smaller in order to fit more people in the stadium. Augustine also has the rare, and very heavy, mace-like tool that was used to number the seats.

As I look around at the old helmets, signed baseballs and game-worn jerseys, a customer arrives. The man visited Augie’s the week before, then went home to take measurements and figure out exactly how many helmets he could bring back home with him. Today he buys a rare Rockne bust that allegedly contains metal from a carriage made by Rockne’s father as well as a piece of the airplane that was carrying Rockne when it crashed in 1931, killing the coach and seven other people, and a piece of the Golden Dome.

Many of the collectibles in the store are not for sale, but since nobody eats old leather helmets for dinner, Augustine has to make some transactions — even if he does so with mixed feelings.

“It’s like a piece of the family. Many of these I’ve had for 25 years. I like when people come in here and appreciate it. They buy so they can put them on display, and that’s what they’re meant for.”

But the best ones will stay in the family.

“I’ve got some great pieces put away for my kids. They are not going to suffer,” Augustine says.

When it comes to great Notre Dame sports moments, Augustine hasn’t had to suffer either. So who is his all time favorite Notre Dame player?

“Boy, that’s tough. It would have to be someone I have met. It has to be Johnny Lujack,” he says, before changing his mind. “A tie between Lujack and Johnny Lattner. They were great guys.”

And what’s his most precious item? A Rockne humidor in the shape of a football, carrying the autographs of Rockne and fellow coaches Pop Warner and Tad Jones.

“The greatest coaches of their time,” Augustine says, mentioning that Stanford and Yale, where Warner and Jones were head coaches, are two universities that have achieved greatness in both football and academia alongside Notre Dame.

Not surprisingly most of his customers are alumni who come to South Bend on home football weekends — if they have money left after taking the trip and finding places to stay and eat. The most expensive collectible Augustine has for sale is a scrapbook page containing the autographs of Rockne; Adam Walsh, the center and captain of the 1924 football team; each the Four Horsemen; and Grantland Rice, the sportswriter who coined that nickname for the team’s famous backfield that year. Bring a little extra cash to the next home game — around $10,500 — and you might be able to persuade Augustine to let it go.

But don’t think you have to stop paying your mortgage this year to browse at Augie’s. Lots of memorabilia can be found for less that $50, and if you just want to look around and hear some great stories, you are very welcome.

“What I don’t get is this,” Augustine had told me when we first started talking. “Why isn’t there a Rockne museum on campus?”

Why should there have to be? I would argue that one already exists a quarter mile east of it.