The eight-column banner headline running across the front page of the South Bend News-Times spelled out for local readers and those at Notre Dame the big news then reverberating around the globe: TWELVE KILLED IN ANTI-BRITISH RIOTS IN DUBLIN. Underneath the large streamer, two articles carrying London datelines began to tell the story of what’s now known as the Easter Rising.

The date was April 25, 1916, one day after a band of Irish rebels stormed the General Post Office in downtown Dublin and boldly declared the establishment of “the Irish Republic as a Sovereign Independent State.”

The bloody fighting between these combative nationalists and the British military didn’t escape the attention of students and faculty on the Notre Dame campus. On April 29, the day P.H. Pearse, the president of “the Provisional Government,” surrendered, the University’s student-run Scholastic magazine published an editorial titled “The Rift in the Empire.”

Referring to the “Sinn Fein outbreak in Dublin” and the “Irish troubles,” the anonymous writer commented that “an Irish rebellion — even if it took place at once and along the lines of a trained and formidable armed onslaught on British power — would do little beyond achieving a martyrdom.”

The prediction of “martyrdom” proved prescient. Rebellion-minded combatants killed during the five-day Rising or subsequently executed by English firing squads were, indeed, celebrated as martyrs in journalistic accounts at the time.

Those 1916 events in Ireland occurred near the end of Notre Dame’s academic year, when final exams took precedence. Yet what had happened across the Atlantic planted seeds in the campus soil that took root and developed as the Great War was being waged in Europe.

Indeed, just three months after the Armistice was signed in November of 1918, a campus chapter of Friends of Irish Freedom (FOIF) officially was formed. The group took its work seriously, with some student members attending the national meeting of FOIF in Philadelphia that year.

Scholastic devoted nearly 12 pages of its March 15, 1919, issue to a series of articles and poems prepared by the FOIF chapter, which celebrated the Rising’s leaders and the cause they championed. The editors of Scholastic went so far as to give their extensive coverage of Irish affairs a daring, look-at-what-we’ve-done quality: “Much of the matter published here is not allowed circulation in Ireland; to print or quote some of it there would result in imprisonment. The British censors did not allow it to come out of Ireland; it was smuggled out.”

As the Irish War of Independence (or, as it was known in Britain, the Anglo-Irish War) was being fought in Ireland, the stance of many Notre Dame students echoed that of Irish Americans across the country who were longing for an end to the colonial status of the island of their ancestors. The guerrilla-style conflict, which began in late January 1919 and continued until July 1921, prompted U.S. supporters of an independent Ireland to see parallels between these hostilities and the American Revolution of the late 18th century.

The connections that unite the rebelliousness of the Easter Rising to the War of Independence are easy to draw. Some figures — such as Éamon de Valera and Michael Collins — engaged in combat during 1916 and then embarked on various military and political activities to achieve the objectives that the Rising so dramatically raised.

In de Valera’s case, he came to America as a stowaway in June of 1919 to campaign for a free Ireland and to raise money for that work. Born in New York City but raised in Ireland, de Valera was a commandant during the Rising and when captured was sentenced to be executed. He, however, received a reprieve (the precise reasons continue to be debated) and later launched a political career that cast a king-size shadow on his adopted homeland. “Dev,” as he was known, served as Ireland’s head of government or head of state for more than three decades before his death in 1975.

Notre Dame was one stop on de Valera’s 18-month U.S. speaking tour. When he arrived at the campus on October 15, 1919, he was welcomed as the “President of the Irish Republic.”

Of course, “the Irish Republic” was still a dream at that point — proclaimed at the Rising, it didn’t formally exist until 1949 — and de Valera was, in fact, president of Dáil Éireann. That revolutionary and rival assembly to the parliament of the United Kingdom had been declared illegal by British authorities a month before de Valera arrived in Indiana. 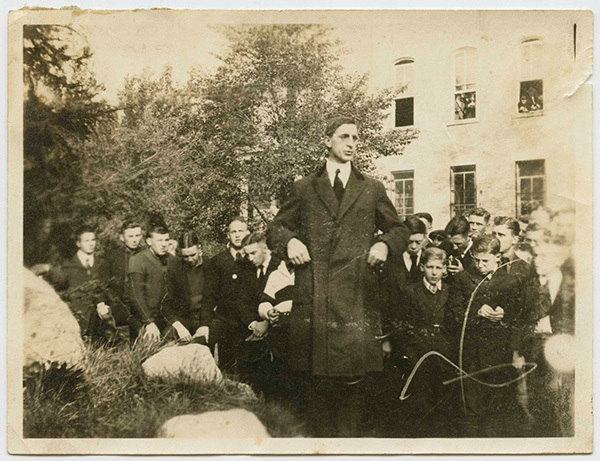 Some 1,600 students, standing in formation to spell out UND, greeted de Valera, who went to the statue of Civil War chaplain (and former Notre Dame president) Rev. William Corby, CSC, to lay a wreath that carried this inscription: “In loving tribute to Father Corby, who gave general absolution to the Irish Brigade at Gettysburg.” An overflow crowd crammed into Washington Hall to hear de Valera proclaim, “Our rising was not really a rebellion but simply another battle in a long-continued fight which has never been given up.”

His language became more pointed as he delivered the heart of his message: “Anyone who says that we belong to the British Empire says in effect that a robber who takes another’s goods and is sufficiently strong to keep them has a moral right to the goods. In other words, that might makes right. Ireland has never been conquered and never will be. She has been oppressed and defeated, but her will to be independent is stronger now than ever.”

De Valera’s visit, which he called his “happiest day since coming to America,” proved to be an important event in the history of the University. A figure of international stature argued his case for nationalist recognition and island-wide independence in front of students and faculty who took him seriously. According to the dispatch of one national magazine, “He was listened to with breathless attention, every one present seemingly eager to catch every word that fell from his lips.”

The November 15 edition of Scholastic reported on the talk and presented a challenge de Valera himself could have made: “Every Notre Dame man must now make a decision for or against the Irish Republic. It is an issue that cannot be evaded.” A few pages later, the magazine reprinted a lengthy letter from de Valera himself that made a direct appeal for financial help in the context of U.S. fellowship.

“The United States is a great and powerful republic — long confirmed in its own hard won liberties,” he noted. “The sister republic, newborn in Ireland under America’s inspiration, is threatened in its infant life as were the United Colonies by a cruel and over-mastering force. We earnestly plead for the assistance which, if prompt and energetic, will be decisive.”

Throughout his sojourn in the States and afterward, de Valera kept making parallels between Ireland and America. He understood that Irish America was vital to Ireland’s future.

At the same time as many Notre Dame students, alumni and administrators were voicing support for an independent future for Ireland, another debate arose on campus: Should the school’s athletic teams be called “the Fighting Irish”?

The preferred name then was “the Gold and Blue,” but uniform colors weren’t terribly descriptive of the competitive sports groups. As the football fortunes of Knute Rockne, who began as head coach in 1918, became nationally recognized, sportswriters came up with more colorful labels and aliases for his teams: “Domers,” “Ramblers,” “Rovers,” “Nomads,” “the Blue Comets,” “the Horrible Hibernians,” “the Dirty Irish,” “the Rambling Irish,” the “Wandering Irish” — along with “the Fighting Irish.”

The bellicose appellation had roots in the 19th century, when Irish Catholics faced widespread discrimination in the United States and battled for recognition after fleeing their homeland and the consequences of the Great Famine. The phrase also was associated with the Irish Brigade of the Civil War.

But it wasn’t until 1927 that a powerful administrator publicly weighed in on the subject. In a letter to the New York World, Rev. Matthew J. Walsh, CSC, then president of Notre Dame, said, “University authorities are in no way averse to the name ‘Fighting Irish’ as applied to our athletic teams.”

The nickname, Father Walsh explained, “seems to embody the kind of spirit that we like to see carried into effect by the various organizations that represent us on the athletic field. I sincerely hope that we may always be worthy of the ideals embodied in the term ‘Fighting Irish.’” In other words, Notre Dame teams would play hard and with courage, “what though the odds be great or small.”

This formal christening occurred a decade after the Easter Rising — an event whose reverberations echoed throughout the past century in Ireland and, in W.B. Yeats’s phrase, “Wherever green is worn.”

Robert Schmuhl is the Walter H. Annenberg-Edmund P. Joyce Professor of American Studies and Journalism at Notre Dame, where he’s also director of the John W. Gallivan Program in Journalism, Ethics & Democracy. His book, Ireland’s Exiled Children: America and the Easter Rising, will be published by Oxford University Press in March.