Notre Dame, at least in the ’90s, wasn’t the best place to be a glutton. I spent three years there as a graduate student in history and ate five square meals a day, but I was never really full. This is my fault, not Notre Dame’s. Strangely, I look back on my meals, both on-campus and off, with a kind of masochistic nostalgia, like a portly veteran thinking back on the hard weeks of basic training. I would later go on to become a voluble, obsessive and minutely attentive food writer. I like to think it had something to do with those three years of pained, purposeful eating. 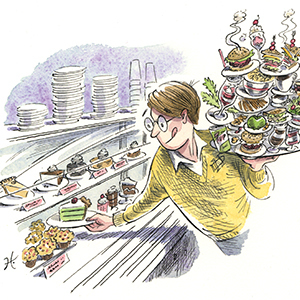 In August of 1993 I drove a 10-year-old, front-wheel drive Buick Regal from New York to South Bend. It was underpowered by a tired engine that burned through a quart of oil a month. Jammed full of my books, records, clothes and a black, cast iron pan, it sagged in the back, and I had to keep the heater on for the whole trip to keep the thing from overheating. Three days later the Buick pulled up at Castle Point Apartments, wheezing and smoking, and I emerged, shaky and sweaty, along with about two dozen empty White Castle boxes. I showered in the dark, having never thought to have the power turned on in my new apartment, and headed back out to the first supermarket I could find, on Cleveland Road. I bought a pork butt and some Betty Crocker dehydrated hash browns, and I cooked them together in the black pan, which also served as a plate. This was the last home-cooked meal I had that semester.

The food choices on campus then were limited. The library, where I spent most of my time, had some vending machines and a microwave in its grim, dismal basement; I used it as an automat, stopping down multiple times a day for frozen White Castles (!) and Diet 7-Up. I would step into Flanner Hall each day, on the off chance that its tiny snack bar would have a cherry cake donut — I had gotten one there one day and held out hope that I might see one like it again.

LaFortune was worse. There was, as I remember, a school-run, fast-food counter with the pale, pasty, cadaver-like pizza slices I remembered so well from Ventnor Middle School. A tiny convenience store had watery coffee, the kind you pump out of a big thermos, but a plentiful supply of Yodels. Such was my state that a Yodel was a bright spot in my day. That winter was cold and dark, and I didn’t have a girlfriend, and I didn’t know what I was doing out there, and my only ready means of self-medication required my driving off campus to Archie’s for barbecue or, if especially depressed, to the Shoney’s on 933, where I really let myself go crazy, and afterward wanted only a bullet for dessert.

My second semester was happier, less desperate. Not by much, but a little. My best friend in the department, Brother Jim Carroll, CSC, ’87M.A., ’97Ph.D., started bringing me in with him to the University Club, where you could get a solid hamburger or a gray but well-meaning little steak or other grown-up things to eat. Better still, you could run a tab. I was poor as well as lonely, and this fact by itself cheered me. There were no scrubs, outcasts or losers at the University Club. It was my first real experience with community on campus. It became indeed not a second home but more like a first one. I would see some of my teachers, like Phil Gleason, and converse with them in warm and urbane terms about subjects other than history. It was the first time I was happy.

Of course, the club was something of a siege tower for me. I was always vaguely terrified when walking around the undergrads. There were young guys with crew cuts, literally bristling with hostility; there were unspeakably beautiful co-eds whom I eyeballed shamelessly, as if I were an invisible man, which I kind of was. (Not invisible enough, though — I found out later that I had been nicknamed “King Leer” by some of them.)

My integration into Notre Dame as a community came the only way it could, in the end: I gathered myself up one cold spring night and walked into the South Dining Hall. This, I knew, would be another Ventnor Middle School flashback, this time to my always-fruitless search to find a place to sit. I stopped feeling like a misfit the minute I walked in. What bounty! There were immense steaming vats of pork in creamy brown sauce, and crusty macaroni and cheese, and thick pink slabs of salmon, and an infinite well of roasted potatoes. There were clear cylinders filled with Cap’n Crunch and Frosted Flakes, and immense dispensers of ice cold whole milk. I was dumbstruck, overwhelmed, a Somalian refugee looking at his first supermarket.

I loaded up what would be the first of many trays and was so oblivious that I sat down at a table filled with ROTC guys in full camouflage. “Holy God!” I said to one of them. “I should eat here every day!” “Everybody does,” he replied, with a notably unhostile expression, and laughed. “What have you been waiting for?”

Cultural historian Josh Ozersky writes about food for Esquire, The Wall Street Journal, RachaelRay.com and Food & Wine Magazine. He is the founder of Meatopia, an outdoor culinary event, and co-founder of Ozersky.tv. His books include The Hamburger: A History and Colonel Sanders and the American Dream.