I sat in a small chair in the pediatrician’s waiting area, guiding threaded blocks along familiar curves of colored wire.

“Lincoln?” a nurse announced, calling for the next patient. 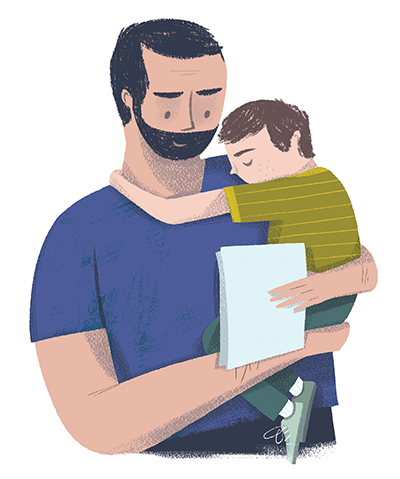 I returned my attention to the metal maze that seemingly lives in every pediatrician’s office in every age. It feels as though you cannot become an adult without first learning to navigate this knotted test.

“That’s me!” I said, jumping up and toppling the diminutive seat.

“You’re Lincoln?” the nurse asked, glancing back at her chart.

“Well, no. He’s Lincoln,” I said, pointing to the sleeping newborn in the car seat next to me. “But I’m his dad.”

It was the first time I spoke those words aloud, and I said them with an inquiring inflection, still uncertain about the veracity of my new identity.

“So you’re his father?” she asked, with the patient cadence of someone used to speaking to children.

“I’m his dad,” I confirmed in my most confident adult voice, hoping she didn’t notice the overturned plastic chair and still-spinning blocks behind me.

Lincoln was all of a week old, and I had spent that week pretending I knew what I was doing. The key to my charade was nodding. Any fool can nod like an idiot, but an experienced charlatan practices the subtleties of the art.

The show began the moment Lincoln was born. When a nurse ran through perfunctory checklists, I knew to nod vigorously. When a tech tested Lincoln’s hearing, I looked at the incomprehensible results and nodded thoughtfully as if they made perfect sense (I was looking at them upside down). My pièce de résistance was a head cocked, nearly imperceptible, rhythmic nod that announced I was pondering a decision of cosmic importance and should not be rushed.

My wife Emily would shake her head at the familiar ruse, give the appropriate answer to whatever the question was, and I would quickly agree as though I had independently reached the same conclusion. Emily is a physician, so my parenting strategy worked flawlessly those first few days.

But after my brazen display of ineptitude in the pediatrician’s office I was certain an authority figure would come over the hospital’s public address system to end my fraud.

“ATTENTION: That man has no idea how to be a father. Please return his child to the nearest available adult.”

No alarms sounded, and we walked right out.

“Sorry, Link, looks like you’re stuck with me,” I said to my son with a chuckle, feeling unfit to be a father.

Thankfully, Lincoln, like all children, was happy to whip me into shape. After lulling us into complacency with a quiet first week, our son awoke with the earnestness and vocal power of a seasoned drill sergeant. The subsequent weeks were a sleepless fugue state of shiftwork in which we measured the passage of time not in minutes or hours but in diapers and breast milk.

In brief moments of lucidity I remember taking pride in my progress during paternity boot camp. Changing diapers, bottle feedings and soothing my son all started to feel like second nature. I read books to Lincoln while he fell asleep and I researched college funds in the short time I managed to stay awake on my own.

I knew what temperature Lincoln liked his bottle, I knew his favorite way to be held and I knew we were making smart financial decisions for his future. Instead of pretending to have answers, I was discovering them for myself.

Two Earth months (roughly a few millennia in first-time-dad years) after our initial visit, we returned to the pediatrician for a round of vaccinations. This time I felt prepared with the answers a child needs and a father should have.

At the risk of sounding braggadocious, I even sat in the adult area and promptly responded when Lincoln’s name was called.

When the pediatrician spoke to us about some of the common side effects of vaccinations, I nodded in (actual) understanding. I had read up on the protocols and knew Lincoln might experience a mild fever and some discomfort. I left the office confident in my budding paternal wisdom.

Then Lincoln’s fever hit. No big deal, I thought. We’ll give him some Tylenol. Lincoln had a problem, I had the answer. That left me the rest of the day to sip from my “#1 Dad” mug.

Except the Tylenol did little to blunt Lincoln’s fever or pain. I tried feeding him. I tried rocking him. I tried every trick I had learned to calm him. Lincoln’s question was excruciatingly clear — “I’m in agony, can you please help me?” — but all my answers were worthless.

Emily-the-doctor assured me and Emily-the-mother that Lincoln was completely fine and the fever would break soon. I felt I might break sooner.

My son howled in misery, I watched him cry his first real tears and I was helpless to stop either. What good is a father if he has no answers for his child’s suffering?

I wished I could take Lincoln’s wounds and make them my own. I saw him stuck on one of life’s painful barbs and I longed for the power to reach in and wrest him free — the power to untangle every snarl and blunt every edge so I did not have to watch him suffer.

I suspect many first-time parents feel this impulse — a willingness to suffer anything on behalf of their child. As Lincoln gathered breath for another wail, I had a moment’s reprieve to consider this idea of devotion. It seemed incomplete.

We know we must suffer for our children, but when a child struggles to navigate a maze of wires and blocks we do not wrench the metal straight to ease their passage. Instead, we sit down to navigate it with them. With my son entangled in a knot of suffering, I realized my responsibility in that moment was not to suffer for him, but to suffer with him.

Acceptance does not save us from anguish, but it allows us to endure it. It does not inoculate against agony, but it opens our heart to another’s so that we may share its burden. Acceptance is an admission of a child’s vulnerability and a parent’s helplessness. Not a passive act of indifference, but a willful embrace of things beyond our control.

So I stopped trying to take Lincoln’s tears from him. He earned them. He needed them. He will need them again.

Instead I tuned my heart to the frequency of his cries and accepted his pain as my own. I gathered my son into my chest and we laid in the darkness on the floor. He moaned woefully, I rocked gently, and we suffered together.

A couple hours later the fever broke and Lincoln collapsed in relief. He slept sprawled across my torso, a survivor of his first experience of suffering.

And it has only just begun. While he navigates this world, Lincoln will come to know intimately fear, despair, failure, heartbreak and sorrow.

As he clung to me like a lifeboat, I considered the limits of limitless love.

Lincoln’s questions will be the same ones we all have: Who am I? Why am I here? What should I do?

If that wasn’t enough, I thought as I laid Lincoln in his crib, he will also have to suffer a fool for a father.

Luckily this fool finally realized a good father does not need all the answers for his children. He just needs to know when to suffer for them and when to suffer with them. As for insufferable dad jokes? Sorry, kids, those are a non-negotiable job perk.

And how do I expect to handle the countless questions my children will have for me each day? Most of which I certainly will not have the answers for? Nod and agree with their mother, of course.

This essay by Will Kearney was one of four second-place winners in this magazine’s 2017 Young Alumni Essay Contest. Kearney is a freelance writer living in Chicago whose “Dog Days” essay was a second-place winner in the 2013 contest. Reach him at will@markingourterritory.com.