The fact that it’s in a forest is only the beginning of how Emil Olesen’s farm is out of the ordinary. The Danish farmer avoids driving tractors if he can, even though he owns a few. He finds work in them boring, and it’s easier to just use his Toyota Hilux, which, like himself, is in its 20s, for all pig-related work except moving water. He’s volunteered to move me as well, so I can see the forest-pigs. That’s lucky, since I brought a Peugeot 107, a true city car that would not have done well on the off-road rolling hills of Mols, the southern part of Jutland’s nose. 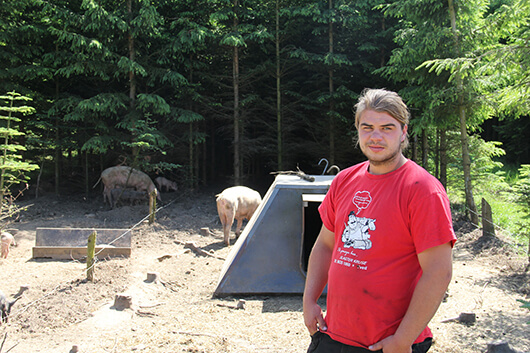 Olesen, half the age of an average farmer and flashing a man-bun, doesn’t look like Old McDonald. He is part of a movement of farmers who decline to sell to the massive companies that trade in bulk. This movement is very much alive in the United States as well, where these farmers sell high-quality and more sustainable products to their neighbors, at farmers markets, or through Community-Supported Agriculture, as does the teacher of the horticulture class I’m auditing this spring at Notre Dame.

He calls himself, or his business rather, Skovsvinet, translating directly to The Forest Pig, which in Danish has the same meaning as litterbug, though being called a pig might be more insulting than “litterbug.”

“A lot of people find it funny. If they’re sending me an invoice they often ask an extra time so they’re certain they won’t be insulting anybody,” said Olesen, wearing a T-shirt advertising the local butcher.

Though it’s not all fun and games, it’s important for Olesen that he is enjoying himself, which is part of the reason he started his own farm. He doesn’t want a boss. “I always do what I want,” he said. “Wherever I am, including in jobs, I’ve always said ‘I don’t give a damn, I do it this way.’”

That is also part of why he isn’t a member of a farmer’s association, unlike the vast majority of farmers in Denmark, and it’s why he dropped out of Kalø Organic Agricultural College. At Kalø he took issue with the organic approach, which he describes as “fanatic.” To him, respecting the animals and land that you work with is more important than the label you put on your end product.

“Nothing is ever going to be sustainable. I’m growing tired of that word, because everybody uses it. But if you want something that has been sustainably produced, don’t buy organic, where you need to buy palm oil and others things from Africa to make the feed because you can’t make it yourself when it has to be organic,” he said.

Besides studying for a while at the organic agricultural college, he has worked with both conventional and organic pigs. “I think I’ve had a foot in each camp, so I can actually say ‘that part is nonsense,’ and ‘that part is quite good.’ Because there are many good things about organic farming, no doubt. But I only use the good parts and stay away from the spelt-mom nonsense,” said Olesen, using a typical Danish caricature of people who, for instance, use the old wheat species spelt and send their kids in institutions that don’t allow eating cake or candy at birthday parties — and certainly not if it isn’t organic.

Going your own way also means experimenting. What really drives Olesen to try new methods is a desire to do as little tedious work as possible.

“I like things that don’t need much attention. I am trying out a system where I let weaned pigs out on a field and I don’t do anything else. I just plant the potatoes, but they have basically cleared it of weeds,” he said.

To see if the approach works, he also grows potatoes in a more ordinary way on the bordering field. The difference is remarkable — perhaps due to the automatic fertilization that is provided in the pig-assisted field.

“And then I will let them dig up the potatoes themselves in the fall, and it will be cleared again. It will be black all winter when they have dug them up, and I will have fewer weeds again.”

Letting the pigs dig up the potatoes directly from the field also means he doesn’t have to plow. Not plowing is a trend in conventional farming, but letting pigs do the work is not, so it usually comes at the expense of buying new, expensive equipment — and using more pesticide.

“I can see the point in plowing if you’re an organic farmer and need to fight weeds — it can be hard to live without in those cases. But other than that there are only downsides to plowing. It takes a long time, it’s expensive, it’s boring and the fields get uneven like hell,” Olesen said.

That being said, some of his unorthodox approaches leave him with a smaller financial result than he could have had, and his unwillingness to change his ways lost him an offer from a large company that wanted to buy 1,000 pigs a year, four times what he sells now. “If you can cut some work processes, especially plowing, which is one of the more expensive ones, what does it matter that you don’t produce as much? It’s unimportant,” he said. “What matters is what it cost you to produce that pile; that’s what I care about.” 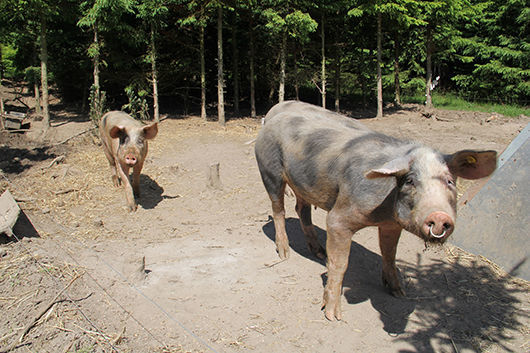 In his two years of working his own farm, Olesen has been fairly successful. He didn’t need to take a loan to start his operation, simply because it is so small and he had some saving, and even though he does not sell many pigs compared to most farmers, his overhead is so low and his profit per pig is so high that he is making a living.

He manages that by producing pigs of a high quality and selling them at a high price. When I visited him, the kilo price that most pig farmers were selling at was 10 DKK ($1.43), while Olesen sells at 63 DKK ($8.98) a kilo. During the summer he spends most weekends grilling pigs at parties, selling them at 95 DKK ($13.55) per guest. He sells at these higher prices at least partly because he does the slaughtering himself at the local butcher shop instead of selling to the big meat-processing companies. Olesen invests his own time rather than money. No middleman, so all the profits go to him.

Mainly, however, Olesen sells the story of pigs that lived their whole lives in the forest, having much more space and freedom than their stable-bound friends. They get their noses dirty digging for food, they take mud baths, and they can run around as they please.

When you first see the pigs, though, you might think the sows look skinny. They are. That’s because the piglets get breastfeeding privileges for eight weeks. “Inside, you breed to have sows that give all of their milk in four weeks — that’s when you take away the piglets normally,” he explained. “So when a sow that is bred to give milk for four weeks does it for eight instead, it ends up looking like this.”

He doesn’t do it that way to make the piglets happy, though. The longer period with milk leaves his pigs stronger, so he doesn’t have to use medicine.

All in all, it seems like Olesen provides a great life for the pigs. But it’s about himself, too.

“During the summer it’s a poop in a pocket to work with pigs inside, and I’ve done that several years. It’s really terrible. It’s warm and it stinks. . . . It’s not like that here. It doesn’t smell like pig, and you don’t smell when you get home.”

The charming scenery in the forest and by the sea would seem like a more attractive work environment than a conventional pig farm as well. But there are bad things, too. Winters aren’t much fun, and predators have given Olesen some worries.

“There’s been some fox trouble, but I’ve also shot a couple down here. I’ve figured out that it helps a lot if you urinate on the huts when the new litter is about to arrive, and I got a sack of hair from the barbershop and I toss that up here so that it smells around the huts.”

Despite the hassle of having animals, he loves working with them, and he’s owned or taken care of a large variety, ranging from pigs and cattle to ostriches and even foxes.

“I have said to myself ‘no more animals’ several times, and then I haven’t had anything for three months, but then I think that I could at least have a few chickens. And then it starts over: ‘It would be nice to have a pig to make fat in time for Christmas.’ Then ‘maybe two?’ That always happens with me. Every time. I guess that’s just who I am, but I do think it’s the most fun part of farming — the animals.”