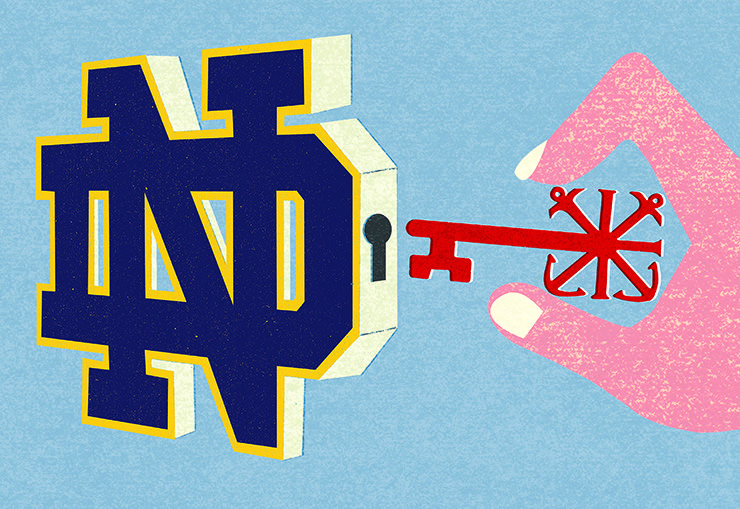 It’s a common sight on Dorr Road, the campus connector between Holy Cross College and the University of Notre Dame: Small groups of Holy Cross freshmen making the trek to and from their Notre Dame classes, preparing for their future at the school across the street.

They call the walk the Holy Hike.

These commuters are participants in the Gateway Program, an initiative launched in 2013 to provide promising students the chance to enroll at the small, four-year liberal arts college and a direct path to transfer as sophomores and earn bachelor’s degrees at Notre Dame.

“Gateway gave me a huge step up as a freshman. It teaches you to be an advocate for yourself,” says Andrew Jarocki, a Notre Dame senior and political science major. “That first year is so good for development.”

The two political science classes Jarocki took at Notre Dame as a freshman helped him decide on his major. He also joined the marching band, playing trombone and establishing friendships that continued after he transferred.

“We provide students the opportunity to gain self-confidence,” says the Rev. David Tyson ’70, ’74M.A., Holy Cross’ president. He notes that 24 percent of the college’s student body is composed of first-generation students. “In that one year of experience, there’s a lot of personal growth.”

Gateway freshmen take four classes each semester at Holy Cross, and one class — as well as the one-credit Moreau First Year Experience life-skills course — at Notre Dame. The program guarantees sophomore-year admission into Notre Dame to participants who earn a cumulative GPA of 3.5 or higher and have no conduct-code violations.

Gateway started six years ago as a pilot program with 17 Holy Cross freshmen. Every student in that first cohort met the goals and transferred into Notre Dame the following fall.

The program soon expanded to include about 75 freshmen, which officials from the two schools say is its maximum and ideal size. More than 95 percent of the 287 students who enrolled in the first six Gateway cohorts have transferred to Notre Dame to complete their degrees.

Gateway admission is by invitation only. Participants generally are Notre Dame applicants who are deemed to be just short of admission standards.

Donald Bishop ’77, ’85M.A., Notre Dame’s associate vice president for undergraduate enrollment, can reel off the numbers from memory: In 2019, 22,199 students applied to Notre Dame. Of those, 3,515 were accepted, meaning the University turns down more than 18,000 applicants each year. Some 120 of them are invited to join the Gateway Program, and approximately 76 to 79 enroll.

Those students stand out in some way, according to Erin Camilleri ’97, ’01M.Div., Notre Dame’s director of transfer enrollment. “We’re looking for students who we feel are going to make Notre Dame a better place,” she says.

By giving Notre Dame a role in preparing these students for the rest of their college education, the Gateway Program “has increased the [academic] quality of transfer students. That’s what Notre Dame wanted,” Bishop says.

For Holy Cross, the Gateway Program has helped raise the academic caliber of student applicants overall, says Michael Griffin ’93, ’04M.Div., ’14Ph.D., the college’s senior vice president. Increasingly, students whose academic qualifications are comparable to those of Gateway students are applying to and attending Holy Cross, including many who stay four years and earn a bachelor’s degree. The school also has added more honors classes for both Gateway and non-Gateway students.

Gateway participants are expected to push themselves to develop strong academic habits, join study groups and get involved in student clubs and activities. They receive student ID cards, email accounts and dining hall privileges on both campuses.

As the program has expanded, it’s been tweaked to improve the experience and provide participants more support. During the pilot year, they were limited in their selection of Notre Dame courses to those offered by the College of Arts and Letters. That soon changed, and now Gateway students may enroll in courses offered by any college or school.

Holy Cross was added to the shuttle-bus route that runs between Notre Dame and Saint Mary’s College, making it easier for Gateway students to travel back and forth, particularly at night and during the winter months.

In 2018, Holy Cross hired a full-time Gateway coordinator: Emily David ’17, a member of the first cohort who earned her Notre Dame degree in economics. Gateway students say having a full-time adviser who advocates for them and can help them enroll in the classes they want smooths the experience of navigating two campuses.

Whether or not students ultimately transfer to Notre Dame, they benefit from the small class sizes and personal attention at Holy Cross, David says. She has maintained lasting friendships with her Gateway peers and the other Holy Cross students she got to know freshman year.

David sees the program as a boon to both schools. “Holy Cross is no longer just the little brother of Notre Dame. It’s finding its own place. The Gateway students who transfer and go on to graduate from Notre Dame, their success is largely thanks to Holy Cross,” she says.

“We are able to help shepherd students to get them ready for Notre Dame,” Griffin affirms.

Gateway students pay Holy Cross tuition as freshmen ($32,000 this academic year), plus an administrative fee, an additional $7,000 in 2019-20. They’re not eligible to apply for scholarships designated for four-year students, but limited need-based financial aid is available.

Some Gateway prospects have never heard of Holy Cross College when they get the letter inviting them to join the program. For many, it’s a visit to campus and chats with current and former Gateway participants that convinces them to enroll.

That’s what happened to Ava Larsen, a Holy Cross freshman. She attended a campus visit and decided the program was the right route for her. Last fall, she took a Notre Dame chemistry course and joined the chorale, biking between the two campuses two or three times a day.

Paige DeJong, a Notre Dame sophomore, had a similar experience. After her campus visit, she says, “I knew in my heart this was where I needed to be. . . . Notre Dame was a place I could really see myself flourishing as a student and a person.”

DeJong credits her freshman classes at Notre Dame and the friendships she developed in the marching band for her nearly seamless transition. She felt herself part of Notre Dame before she was officially enrolled there.

Participants talk about the strong community that grows among Gateway students, a camaraderie that continues long after they transfer to the larger setting.

“We’re always working together and going places together. That community is what sold me on year one. I love it,” says Holy Cross freshman Edward “E.J.” Kelly. His study group is a mix of Holy Cross students, some in Gateway and some not. He’s confident he’ll make the grades to transfer sophomore year and offers this advice to high school seniors offered entry into Gateway: “Do this program. It will change your life.”

Holy Cross College was founded in 1966 by the Brothers of Holy Cross as a junior college, primarily to educate Holy Cross brothers. In its early years, many of its two-year degree graduates transferred to Notre Dame. (Think Rudy.) Over time, Holy Cross grew into a coeducational liberal arts college. It began offering bachelor’s degree programs in 2003 and soon became primarily a four-year degree school.

“I really enjoyed being a part of both communities. I enjoyed having a glimpse into both worlds,” says Thomas Karam ’17, ’19M.A., a member of the original, 2013 cohort. A Greek and Roman mythology course he took at Notre Dame that year led him to his major: classics, with an emphasis on ancient Greek. “I would never have been a classics major otherwise,” he says.

After graduation, Karam entered the Alliance for Catholic Education’s teacher-training program, earning a master’s degree while working for two years at a Catholic high school in Philadelphia. He’s now back at Notre Dame working in Campus Ministry.

Karam advises current and prospective Gateway students to embrace their time at Holy Cross. “Don’t let your goal distract you from your present,” he says.

Gateway transfers now represent about half of Notre Dame’s typical, fall-semester sophomore transfer pool of about 150 students. (Each transfer class also includes anywhere from five to 20 non-Gateway students from Holy Cross, making the college by far the largest source of transfer students.)

The success and growth of the program is a sign of better times for Holy Cross. In 2017, news broke that the college had been ordered by an accrediting agency to develop a four-year plan to get out from under increasing yearly borrowing and the need to eliminate positions during the summer to balance its budget. The college’s operating budgets in fiscal years 2014 and ’15 were in the red by more than $1 million collectively.

The situation raised alarm among some students, employees and alumni, who wondered if the college would survive. More than 18 small liberal arts colleges in the United States have closed since 2016, including Saint Joseph’s College in Rensselaer, Indiana.

Some of the financial pressure was relieved by a deal struck later that year in which Notre Dame agreed to buy 20 acres of land owned by the college and another 55 owned by the Brothers of Holy Cross along State Road 933. Holy Cross is leasing the land back for $1 per year. The agreement is for 75 years, with the possibility of extending it another 50.

Tyson was named the college’s acting president in 2017 and full president three months later. A former vice president for student affairs at Notre Dame, he was president of the University of Portland for 13 years and provincial superior of the Congregation of Holy Cross for another nine.

Today the college’s financial state has stabilized, and the Gateway Program has increased its academic profile, enhancing its ability to hire strong faculty, Tyson says.

Holy Cross’ total enrollment of 450 students includes 188 freshmen this academic year. If nearly all of the 75 Gateway students transfer to Notre Dame, as expected, the college will lose about 40 percent of its rising sophomores.

That’s not worrisome for Tyson, who notes the frequent move across the highway that characterized the college’s earliest days, back when he was a Notre Dame undergraduate. “The two places have been joined by a common foundation. I still see it that way,” the priest says. “It’s returning to our roots.”

Meanwhile, Gateway students continue to spread the word about the program and its benefits. “You make friendships that are hard to forget,” says Jarocki, the senior political science major. ”It’s a cultish level of enthusiasm.”