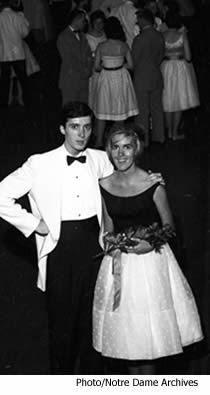 They came from Rosary, Barat, Mundelein, Saint Mary-of-the-Woods and a dozen other “satellite” women’s colleges scattered throughout the country. In the 1940s, ’50s and ’60s, they were the daughters, sisters, cousins, childhood friends and high school sweethearts of Notre Dame men. For many of them, family tradition made them yearn to be students there in their own right. I was one of those girls. In the days before co-education, our loafers and saddle shoes trod dutifully on our own campuses, but our hearts belonged to Notre Dame. The Irish had an expression that explained our situation beautifully. We had to “take it out in wantin’.”

Sometimes on prom weekends, our dates were allowed to take us to class with them. I was fortunate to be able to attend the well-known writer Frank O’Malley’s class on the “Modern American Novel” (or something like that). Because literature was my passion, I remember being absolutely mesmerized by his lecture and thinking as I sat there, “This is what college should be like.”

Unlike our “sisters” at Saint Mary’s just across the Dixie Highway, distance dictated that we travel to get to this special place. And travel we did. To the football games and victory dances, to the Freshman Frolic, the Sophomore Cotillion, the Junior Prom and the Senior Ball. In between we fitted in the Mardi Gras and the Military Ball. Notre Damers (the term “Domers” had yet to be coined) returned the favor, coming to our colleges for dances and special weekends. Blind dates were the norm. Lots of them fizzled but many blossomed into engagements and marriages.

A 1959 graduate of Rosary recalled that although she knew little about Notre Dame before she arrived in River Forest, Illinois, it didn’t take long to realize that South Bend was the place to be on football weekends. Thanks to one of her classmates, who had a friend at Notre Dame willing to fix the Rosary girls up with blind dates, her social life was launched. “We usually took the train up from Chicago and stayed at the Morris Inn. The weekends were always exciting. The nuns never went with us, but we were ladies all the time. Just being on the campus was a thrill. We all swooned over Paul Hornung and all wanted to have a date with him, but he was always taken.” She remembered especially the Senior Ball in 1959. “I had an absolutely gorgeous yellow embroidered organza evening gown. When I walked over the bridge that led into the ballroom on my date’s arm and the band played ‘Man with a Golden Arm,’ I thought ‘My God, I’m in heaven!’”

My own experiences as a student at Saint Mary-of-the-Woods from 1953 to ’57 were similar to my Rosary friend’s. In those days of innocence, as we both remembered, singing was an integral part of every weekend. “Man, Man, Is for the Woman Made” and “A Man Without a Woman Is Like a Ship Without a Sail” were great favorites. The group of ND students that my friends and I knew best, thanks to the high school sweetheart of one of our classmates, were in the class of 1955 and lived in Sorin Hall and later in Walsh. The pre-game jazz concerts on Sorin’s porch were terrific. I particularly loved seeing those halls with their high-ceilinged rooms because they were my father’s halls, back in the 1920s. Before one weekend, my dad told me to look up one of the “bachelor dons,” Paul Fenlon, who still lived in one of the Sorin towers. I went up to his room, and he entertained me for an hour, going through old yearbooks and reminiscing about my dad’s college days.

Since there were no trains in Indiana running directly from Terre Haute to South Bend (a 200-mile trip), we had to be more creative than the Rosary students. Once in a while our college would charter a bus, but as a rule my group of six hired a taxi. Yup, a taxi. After our freshman year, we had our own driver, a Mr. Winthrop, whom we called “Windy.” Windy had been bequeathed to us by a group of graduating seniors, and for three years he was our man on the spot. On Friday afternoons (we would cut as many classes as we could in order to get to South Bend in time for the pep rally), we would load up the trunk of the car and head out. By the time we got to South Bend, we’d be nearly asphyxiated because something was wrong with the exhaust and we had to keep the windows open to keep from perishing. Windy would drop us off and then hang around South Bend with some pals until it was time to make the return drive on Sunday afternoon. All for $11 each, round trip. Our usual ports of call were the Oliver and LaSalle hotels or Mrs. O’Neill’s boarding house on Notre Dame Avenue.

Only once was I lucky enough to stay at the Morris Inn. That was Senior Ball weekend in 1955, and I had a date who apparently had some pull in the accommodations arena. If we had a special date for the weekend, he usually paid for our room. If it was to be a blind date (and that was more common) we paid for our own. Because the hotels doubled their rates on football weekends, from $8 a night to $16, we would sleep eight girls to a room—four on the mattress on the floor and four on the box springs. For a grand total of $4 apiece.

The program for the football weekends rarely varied. On Friday night there would be a pep rally in the old fieldhouse. One unforgettable evening my freshman year—Frank Leahy’s last season as coach—a sustained roar went up from the crowd that lasted for more than 30 minutes. Pretty heady stuff for a 17-year-old small town Iowa girl. Afterward our dates would take us out for pizza or to some dive—I remember one really crummy place called “The Rio” up in Michigan. I didn’t drink back then, but that night we were with a bunch of boys from Chicago who were light years ahead of us in sophistication and liked their nips. It was a long evening!

On game day we dressed up—suits and heels and, sometimes, hats. How on earth we managed to walk all over the campus in three-inch heels is a mystery to me today. Heel spurs were not uncommon. Then it was off to the stadium. If our dates didn’t have extra tickets for us, one of the dads usually came through. The color and excitement of the crowd, the band and the game itself remains as vivid to me now as it was back then. Afterward at the Victory Dance we danced the night away—or at least part of the night, because the boys had to be in at 12:30. If we happened to be staying at the Oliver, there was a “Touchdown Bar” after the game that went on until the wee hours, and at 12:30 the students who lived off-campus began roaming the halls looking for “late dates.” We were usually too tired to go out again but hope always burned eternal.

Sunday mornings meant the beautiful Mass at Sacred Heart and, if we’d not gotten there before, a trip to the Grotto. Then it was time to head back to school. If the date had been a good one, letters would fly back and forth between our campuses. We loved it when we found a letter in our mailbox with the ND monogram on the envelope. Probably the most anticipated pieces of mail were the thick, creamy envelopes that signaled an invitation to one of the big class dances.

A night at the prom

Those prom weekends were magical. Everything was planned to perfection. We still wore long ball gowns with hoop skirts, often elbow-length white kid gloves. Our dates were resplendent in their tuxedos. Big bands played at the dances—I particularly remember Ralph Flanagan and Ralph Marterie. Senior Ball meant a trip to the Michigan dunes on Sunday for a picnic after the Communion Breakfast. Father Hesburgh spoke at those breakfasts, and his talks were memorable.

One of the funniest times I ever had was during a Military Ball weekend with a fellow from Florida that I’d been dating. He invited me up for the dance, but there was one hitch. He and the Navy ROTC had parted company some time before. However, his identical twin brother was still a member in good standing. So my date went as his brother, resplendent in his borrowed Naval braid. Unfortunately, he was terrified that the “Brass” would find him out, so we spent most of the evening cowering in corners and dodging behind potted palms in the new Stepan Center.

That particular weekend was just after Thanksgiving (if memory serves me right) and I had spent the holiday in Chicago with cousins. I had purchased my train ticket to South Bend a couple of days before and spent a bit of time window shopping in the Loop before catching the South Shore. I took a taxi from the train station to Mrs. O’Neill’s, where my date was waiting for me. When I reached into my shoulder bag to pay the driver, I found that my wallet had been picked clean and I hadn’t a cent to my name. The weekend turned out to be a little more expensive for my friend than he had planned.

The ND students also loved coming down to “The Woods” for prom weekends because the nuns rolled out the red carpet for them. Boys came from many college campuses and the nuns were lovely to all of them, but the Notre Dame students were their (and our) favorites. The group I mentioned before from the class of 1955 (the Sorin and Walsh gang ) had an old 1940 Nash called the “Grey Ghost” that they kept hidden off campus. I hate to think how many of us piled into that wreck to go on the picnics that preceded our proms and balls. Some of my friends and I were so impressed with the idea of “wheels” (we weren’t allowed to have cars either) that we surreptitiously tried to buy a hearse to transport us in style. However one of our conversations was overheard by the powers that be and the idea died aborning. On Sunday mornings after high Mass, buses would take us to a benefactor’s beautiful estate for a tea dance, and then the boys would head back to school. If things had gone well, the letters would begin again.

Dad’s weekends at The Woods were mini Notre Dame reunions. The classes of the mid-1920s were represented by my dad, Wade Sullivan; Judge Howard from Indianapolis; and Don Miller of Four Horseman fame. I think they spent more time at the Woodland Inn rehashing the glory days under Rockne than at any planned events.

For those of us who were steeped in the traditions of Notre Dame in the years before girls could enroll, memories of those long ago proms and autumn weekends in South Bend are the loveliest of our college days. As it sometimes does, life often came full circle in succeeding generations. Mine happened on a beautiful afternoon in May of 1996, when I saw my daughter receive her degree from the university that I had loved from afar—exactly 70 years to the day after her grandfather graduated.

The photo here, from Notre Dame Archives, depicts an unidentified couple at a Notre Dame-sponsored dance in the late 1950s or early ’60s.