Some years ago I was visiting a monastery in Sydney, Australia. The monastery crowned a gentle hill over the vast and sprawling harbor. There were gum trees and parrots and fruit bats and arboreal marsupials called brushtail possums, which were officially nocturnal and shy but did not prove to be either of those things at the monastery, where they wandered into the kitchen in the morning and quietly ate from a bowl filled every day with eggs for them. 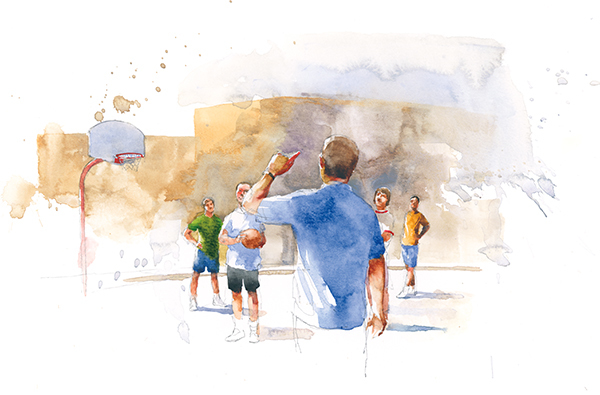 The monastery abutted a school, and the burble of voices from the children rose and fell during the day at set times marked by bells. I got into the habit of walking through the fields set aside for cricket and rugby and watching the matches with the eager pleasure of a man who had never seen either sport up close and was riveted by the geometry and vocabulary and hurly-burly of pursuits he did not know but was interested to try to understand without formal instruction.

The rugby I could understand fairly easily, it being essentially militaristic and the clear ancestor of American football. The cricket, while also clearly the ancestor of American baseball, was another matter altogether, with one pitcher but two batters, and fielders scattered every which way, and batters running bases with their bats, and the pitcher doing his or her utmost to hit not the catcher’s mitt but a triad of spindly sticks behind the batter. All this as green and red parrots rocketed past, and the alluring spice of eucalyptus in the air, and the ancient song of bells, and the chatter and rattle of a language all around me in which I knew the words but not the music; an odd and entertaining and occasionally deeply unnerving feeling, like being in a familiar boat on a strange sea.

One day in my rambles I found the school’s tiny basketball court in a copse of sassafras and bottlebrush trees. Four boys were playing on it, and I stopped to watch, as I love basketball above all other games, love its grace and humor and creativity and generosity and simplicity, a game with no pads and helmets and specialized equipment, a game you can play alone for hours, a game that anyone anywhere can grasp and play in moments, a game that can be played beautifully by anyone of any size, a game that does not reward violence, a game that does reward selflessness and inventiveness and speed and liquidity.

I watched for 20 minutes, admiring the quality of the athletes but not the quality of their play; it seemed to me that the boys, perhaps age 17, were quick and strong and supple, but they were not versed in the angles and shiftiness of the game. I remember wondering if they were new to it, for that very night a monk in the kitchen confirmed exactly that, that basketball was a poor sister to rugby and cricket and Australian football at the school, and probably in Australia at large, the vast country savoring its old imperial sports and its one native sport, Australian football having been invented there as a marriage of aboriginal and settler games, as far as he could tell, though there were many theories about that.

The next afternoon I went down to the basketball court again and found the same four boys, but this time they hailed me, and we got to talking about the game, and they asked me to show them some of the patterns, as one boy said. I confessed that as a player myself I had been terrible at running plays, and only in my older age had my appreciation for the flowing chess of the game deepened wonderfully; but then with pleasure I walked them through common plays like a back-door cut, and a double pick, and showed them how one player can set a screen for another player to shoot behind, and how two players can spring a trap on a ball-handler, and how one player can box out his man so his teammate has a clear path to a rebound, and a few other basic things like that; and then they happily applied my teaching for a while in scrimmage, before the bell rang and they sprinted back up the hill to the school.

In this life I have spent about 30 days in Australia, some 700 hours, I suppose, and I relished almost all of those hours, and think of them often — the sharp angle of a different sun, the new stars at night, the procession of dinosauric bats overhead at night, the pelting of parrots through the trees, the rough cheerful wit and kindness of the citizenry, the paw-prints of new animals in the moist soil at dawn, the extraordinary sight of a brushtail possum silently eating an egg in one corner as an elderly monk sipped his coffee and read the morning newspaper in the other; but as long as I live, I think, I hope, I will also remember, with a deep and abiding pleasure, the hour that I was, for once, a teacher of a lovely and gracious subject. I hope that at least one of those boys remembered what I taught him and used the lessons later in his play, and himself occasionally now vaguely remembers the older American man who paused one day, under the sassafras and bottlebrush trees, and taught him new words in a language he was just beginning to speak.

Brian Doyle, a frequent contributor to this magazine, is the author of several collections of essays and works of fiction. His most recent book is The Kind of Brave You Wanted to Be.