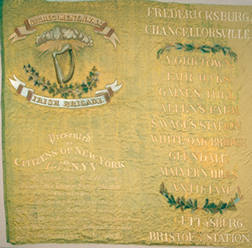 Long before Notre Dame’s football team was known as the Fighting Irish, the University had proof of Irish pluckiness on the field — the battlefield.

Since 1896, the University has owned and intermittently displayed the colors of the 63rd Regiment New York Volunteers, part of the Union’s famed Irish Brigade during the Civil War. The bright green flag, not seen in recent years because of its deteriorating condition, was recently restored by University Archives.

Most regiments in the Civil War carried two flags: the national colors and their regimental flag, which usually bore the seal of the regiment’s home state. But some ethnic units opted to carry a flag unique to their unit. Thus the green Irish nationalist flag of New York’s Irish Brigade came into existence.

There were two main uses of brigade flags, says University Archivist Peter Lysy, who documented the restoration project and the history of the flag in the book Blue for the Union and Green for Ireland. One was so troops knew where home was during the disorientation of battle. The other was symbolic.

“After a battle the men were allowed to write the name of the battle on the flag, so the flag became the unit’s heart,” Lysy says.

Irish immigrants faced widespread discrimination in 19th century America. Many of the established Protestant residents considered the Irish a separate race, and the immigrants’ Catholicism only made them more suspect. The Civil War helped change that as the Irish regiments showed their mettle on the battlefield. The Irish Brigade suffered some of the heaviest losses of any brigade.

The flag reflects that hard-won respect, along with the establishment’s realization of the importance of Irish support for the Union cause. A group of 34 New York merchants, none of them Irish or Catholic, commissioned six of the Irish Brigade flags from Tiffany and Company for $2,000.

The flag in Notre Dame’s possession was never actually carried into battle. The Brigade chose to fight under a simpler version and keep the Tiffany banners in New York. The flag was donated to Notre Dame after the war as a result of the friendship between Father William Corby, CSC, the chaplain of for the Irish Brigade, and James D. Brady, the last colonel of the 63rd. Corby became president of the University after the war.

The flag is currently in storage at the Snite Museum and last appeared publically in an exhibit at the Northern Indiana Center for History, located in South Bend.