When I was a kid, the Boston Marathon was more important than Christmas. In my pagan pantheon, the legendary marathon — with its parade of sneaker-clad superheroes — trumped Halloween and the Fourth of July combined. Indeed, Marathon Monday was more exciting than any other annual event, except perhaps my birthday: It was the day my father appeared on television. It was the day my siblings and I cheered for thousands of runners; it was the day we cheered on Dad.

The excitement actually began a whole week before the marathon, when we got to meet the top runners from around the world. Hired by the marathon’s corporate sponsor, my father hosted the 40 elite runners invited to the race in a secure downtown location that became the Boston Marathon “Village.” There, inside an otherwise empty and heavily guarded hotel, my three siblings and I met world-class runners from across the United States; from Tanzania, Kenya and Ethiopia; from Belgium, Italy, Germany, Portugal and Norway; and from Korea, Japan and New Zealand. 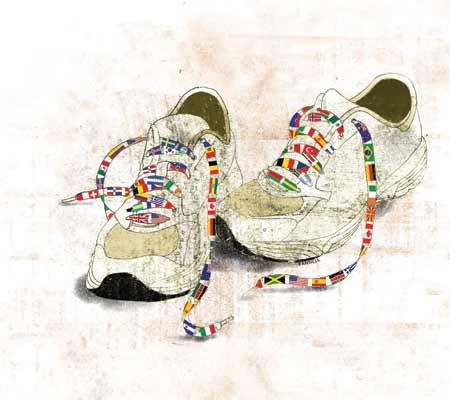 The runners arrived about a week before the marathon to adjust to the time zone. Living together in a hotel ringed with security guards, they previewed the race course in chauffeured cars, studying each hill and turn, and ate carefully prepared meals. They went for training runs, played rounds of miniature golf and Jenga with us in the vacated hotel lobby, and joked in their limited (or fluent) English. Under my father’s care and tutelage, they quietly prepared for the race, safely removed from the media spotlight.

So for me, the Boston Marathon — historically and internationally mythologized since its beginning in 1897 — was also personal and familial. Over the years, the event enabled my siblings and me to get to know some of the world’s best runners as people with their own families and villages, anxieties and Olympic ambitions. Whether playing Go Fish with a homesick Korean, tracking down a Belgian lost at Logan Airport, finding prosciutto for a discerning Milanese or helping an Ethiopian purchase Easter clothes for all of the kids in his village, my siblings and I looked forward to the Boston Marathon as an adventuresome family reunion. It was, however, one that included translators, bodyguards, limousines and, somewhat incongruously, dozens of people in wind-pants and neon spandex.

We learned things from this international exposure that we couldn’t from our social studies classes. Over the years, my sister and I got to know Uta Pippig, a woman raised in East Germany behind the Iron Curtain who, permitted to compete after the fall of the Berlin Wall, would win three times at the Boston Marathon, a race Pippig espoused as her own “Marathon of Freedom.”

We also befriended — over knock-knock jokes and cups of tea — Tegla Loroupe, a tiny Kenyan woman who has held the world record in four distances. Though Loroupe had not grown up under Communism like Pippig, she had been born into a family of 24 children in the rural Rift Valley. Belonging to a tribe that permitted polygamy and the marriage of girls as young as 14, Loroupe was determined to forge an independent path. With the support of her mother, she ran 10 kilometers (about 6.2 miles) to her elementary school each day, an exercise that primed her success as a world-class distance runner.

After a stellar athletic career that included the world record in the marathon, Loroupe has become a U.N. ambassador and an international advocate for human rights. And my younger sister, who once played see-saw games with Loroupe on a hotel sofa, is now a Fulbright scholar in global health.

While overseeing it was part of my dad’s job, the Marathon Village became a part of our family’s life, broadening our sense of the world, giving us an international “family” that came annually to Boston. My youngest brother, enamored with the richness of this transnational exchange, would as an adult move to Stockholm and marry a Swedish doctor, making his home on a European peninsula with the ease of someone moving down the block. And my brother Freddy, inspired by the science of sport in its physiological and psychological dimensions, has become a running coach himself.

So although our father was safely positioned in a television studio this past Marathon Monday, miles from the explosions near the finish line, the terrorists’ attack struck home. It was as if someone had put a bomb in our backyard: a frightening sense shared by all Bostonians. This feeling became eerily concrete when, days after the attack, one of the two suspected terrorists was discovered in a homeowner’s backyard — bleeding inside of a stored boat like a Homeric stowaway.

Whatever the terrorists’ darkly twisted motivations, Bostonians’ loyalty to the marathon, to the sport of running and to the international richness of the city itself has, ironically, been reconfirmed. The violent materials that exploded from two backpacks summoned a response — peaceable, heroic, ennobling — that largely defied the circumstance of its provocation.

But in the days following the attack, pundits compulsively referred to the effort “to make sense” of the terrorists’ motivations. Maybe understanding the violence should be left to forensic experts who will, no doubt, construct a narrative from the ruinous lives that brought it about. To my mind, now is the time for Bostonians to look inward to see if we might, in facing this crisis, prove to be the “City upon a Hill” that Puritan settler John Winthrop famously ordained us in 1630. On the bloodied sidewalk of Boylston Street, it was who we are — not the geography of where we work, play and live — that was brought under savage attack.

Our city’s initial response has, for the most part, proven us a community of workaday valor and studious tolerance. I hope that our less proud moments of exiling heretics, burning witches and stoning schoolchildren have been retired to a vigilant memory of our past, where they belong. The metaphoric “hill” of Winthrop’s speech — from nearly four centuries ago — still beckons.

Hills are a feature of the marathon course and an element of Bostonians’ inner landscape. Our family’s house is stationed at the top of Heartbreak Hill, a dreaded 726-meter incline within six miles of the marathon’s finish line. But moving there, when I was 10, seemed to me a sign that our family was moving up in the world — or in the altitude of our expectations.

Subconsciously, I think I’ve always associated my career as a writer and as an English professor with my father’s career as a professional coach and a former high school English teacher. With the pure and haphazard logic of a small child, I tied together my starting school at age 4 with the start of my dad’s business. The summer I prepared for kindergarten, sharpening an arsenal of pencils and “polishing” my purple Velcro Pumas, my father left his teaching job to open TRACS (Treseler’s Running and Consulting Services). At the time, I knew enough of the alphabet to delight in the acronym; it would be years before I understood the singular possession of the apostrophe.

That September, my father built himself a desk by balancing an old wooden church pew across two filing cabinets in a corner of my bedroom. While I was at school, he ran his business from his improvised office. Within a decade, he would coach several Olympians and World Champions, consult for two international sneaker companies and direct large-scale sporting events across the country. When I did my homework at night in his office chair, I fancied myself his junior business partner. I practiced my spelling and tried to keep my purple sneakers looking sharp in case there was, in fact, an official job opening.

It was when my father’s business outgrew my bedroom and, subsequently, a converted garage that my parents bought the creaky, cranky, turn-of-the-century Victorian at the peak of Heartbreak Hill. Located between the marathon’s 20- and 21-mile marks, the marathon’s legendary summit is often the climax of the race, its long incline taxing runners’ legs already shorn of their spring. On countless occasions, this hill has been the stage of dramatic reversals, exciting battles for the lead and — in hotter years — desperate acts of rehydration.

Because of its dramatic elevation changes, the Boston Marathon can never be an official world record course. But the springtime humidity and the four hills of Newton, concluding with Heartbreak, have given it a prized place among marathoners. Its accomplishment is widely coveted; its legacy has been earned.

The night after the bombing my father appeared on Piers Morgan Live on CNN. When he sat for the interview, he had already worked a 15-hour day. He had, no doubt, been traumatized by the news and his worry for the runners, spectators, media personnel and race officials who had been, for that interval, gravely endangered. In his commentary, my father included among the marathon’s victims the race’s winners — Lelisa Desisa Benti from Ethiopia and Rita Jeptoo from Kenya — who, because their victory coincided with tragedy, might never be properly acknowledged.

My father was also quick to emphasize that the Boston Marathon has endured two world wars and the stultifying atmosphere of fear following 9/11. “I am quite sure,” he concluded, “that there will be a Boston Marathon next year, but I am certain that it will be changed forever.” To date, my father’s remarks have been quoted in more than 10,000 articles and media venues. He lent the perspective of a running coach troubled by the terrorists’ injury to the sport. But he also reminded us of the marathoners who, in their travel from other countries and cultures, demonstrate the collegial competition that instills hope for our global neighborhood.

Writing from my own desk, I agree with my father that Boston’s marathon will include this violent chapter while resisting its definition. The race’s narrative will continue in its running: celebrating an invincibility that includes our vulnerability, venturing a story past the weapons’ blast.

Heather Treseler is an assistant professor of English at Worcester State University. Her poems, memoir essays and discussions of American poetry have appeared in three books and in journals such as Harvard Review, The Iowa Review, Southern Poetry Review and Boulevard.