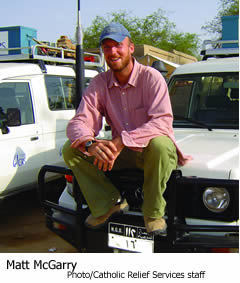 It has been more than a year since I stepped off of the plane that brought me to the Sudan to take up a position as area coordinator for Catholic Relief Services (CRS) in the northernmost sector of West Darfur. Of that, I am certain. Beyond the date of my arrival and a few seminal events, however, the entirety of the last 14 months seems cloaked in an impenetrable haze of the surreal. Why on earth did I come here? Did this last year really happen? What am I still doing here?

I have joked with friends that there are four basic kinds of humanitarian relief workers: those who are here to save the world; those who are here to collect their relief-worker merit badge before taking off for the next dangerous, exotic destination; those who would rather be anywhere else but can’t seem to make it work; and those who have no idea why they are here but continue the work because nothing else makes much sense.

The punch line is that at one time or another we all, myself included, fall into each of these categories. Of course, we are just trying to bring some order to a chaotic existence and would never be so presumptuous as to think that we have any idea of what motivates our colleagues to continue this thankless, frustrating, often futile work.

I do not know how people who have been here for nearly two years manage to maintain an outgoing, upbeat demeanor in the midst of so much madness. I do not know how someone can spend 12 hours a day, seven days a week in a cramped, dirty, 110-degree office with no air conditioning, immersed in human misery, and then pass up the opportunity for a transfer to another posting in a country with candy bars, mixed drinks and an ample coastline. I do not know why anyone else would leave behind home, family and a world that occasionally makes sense in order to come to one of the most godforsaken corners of the earth.

I would not dare to even guess at what lies behind the decisions of the countless inspirational men and women I have met here, but when I ask some of these questions of myself, the only remotely satisfactory answer I can come up with is that I am here because of people like the man I will call Mohamed.

At 33, Mohamed is a gentle, unassuming man from one of Darfur’s semi-nomadic tribes. Trained as a statistician, he has traveled throughout Chad and Sudan, worked as a teacher and acquired functional, halting English. His dreams are modest—a wife, a family, maybe someday a trip to the United States. In spring 2003 he was working in the family business in a small town in the northern part of West Darfur, selling livestock in the market. Then the world came undone.

Mohamed’s village was one of the first to be destroyed in the conflict between the Arab militias of Sudan’s Islamic regime and the rebel groups composed of members of native African tribes in the Darfur area. His family members and friends were murdered. His modest home, holding all of his earthly possessions, was burnt to the ground. The livestock that constituted his family’s job, bank account, social security, health insurance and reason for getting out of bed in the morning were either slaughtered or stolen. Those family members who managed to escape on foot were scattered throughout Internally Displaced Persons camps in Sudan and refugee camps in Chad.

Ordinarily, this is where Mohamed’s story would end. We would leave him a broken, penniless man, scraping out a woeful existence in a refugee camp, placing what is left of his faith and trust in God’s mercy and the generosity of the international community. He would be just one more of the two million increasingly forgotten and faceless Darfuris whose lives have been shattered, perhaps irrevocably, by a violence that is incomprehensible in its ferocity and scope.

Remarkably though, there is more. Somehow Mohamed made it to the capital of the province of West Darfur, where his English and quiet confidence were sufficient to obtain employment as a food monitor with CRS. He has become an indispensable leader on a team that each month distributes vital food assistance to the more than 110,000 men, women and children affected by the conflict. Without the work carried out by Mohamed and other food team members, many of these people would already have died excruciatingly painful, meaningless deaths.

Mohamed’s job of distributing food requires handing more than tens of thousands of pounds of food to thousands of tired, hungry and frightened people over the course of an unbearably hot and dusty day in the middle of an active war zone. Yet to watch him move among the desert-hardened men, desperate mothers, wailing children and wasted grandmothers is akin to watching a gifted teacher gain complete control over an unruly classroom. He simply gets things done and, in so doing, makes a significant contribution to staving off a human catastrophe of biblical proportions.

The extent to which humanitarian relief efforts succeed or fail depends in large part on people like Mohamed. Though his official position is as a food monitor, he is also a translator, logistician, security monitor, community liaison officer, team morale booster, historian, navigator and confidante. Without Mohamed and thousands of other hardworking Sudanese staff, relief operations would grind to a halt, if they ever managed to get started in the first place. If the conflict is ever to reach a peaceful conclusion, it will be largely because of these heroes’ tireless efforts on behalf of a community bigger than just their own village or tribe, the traditional boundaries of concern in this intensely tribal society. Their courage and commitment are what make the events of the past several months so tragic.

Last November, the already difficult operating environment in West Darfur began unraveling. As bandits, militias and splinter rebel factions specifically targeted relief organizations, cross-border tensions with Chad increased, large-scale attacks on civilians resumed, and the region slipped into near total anarchy, it became impossible for relief workers to venture out of the relative safety of the province’s capital. Those of us still there sit trapped in town, as little as a 30 minute drive from people who desperately need our help.

Nothing I have yet experienced in my life has been as infuriating and heartbreaking as the current situation in West Darfur. All of the gains of the past year—the drops in malnutrition and mortality, the gradual rebuilding of a decimated society, the training that has allowed individuals like Mohamed to flourish—are being erased, and we are utterly powerless to do anything about it. It is one of the peculiar contradictions of life in a conflict zone that those of us who are trying to keep things running day to day have the least control over the macro-level factors that permit us to do our jobs. Paradoxically, the responsibility and privilege of giving a voice to the voiceless millions of Darfur falls largely on those who will never set foot in Darfur nor meet a Darfuri.

Within the next few months, I will be departing West Darfur to assist in the CRS relief and recovery operations in the earthquake-affected areas of Pakistan. But I will first make a stop in the United States to try to reconnect with loved ones, make some sense of the past year and stock up on winter clothing. Though I have been blessed with a loving, supportive family and circle of friends, I already know that I will spend a significant portion of my time at home explaining that no, I am not crazy; that Sudan is in Africa; and, yes, the lives of people I had not met before last year are quite a bit more important to me than my own comfort or quality of life, and they should matter to you as well.

It would be unfair to expect people who are essentially several centuries and an entire world removed from life in Darfur to understand the realities of this isolated patch of desert, but I will try. It is the very minimum that I owe the tens of thousands of men, women and children I have tried to serve while I was here, and who have given me more in return than I would ever have imagined possible. It is the one small thing I can do to repay the immeasurable debt I owe to Mohamed and his team members—my colleagues, my mentors, my friends.

In exchange, these extraordinary men and women have provided me with an example of how to live that I will carry with me for the rest of my days. I can only hope that all of the work will not have been in vain. As they say in Darfur with equal parts hope and resignation, Insha’alla, God willing.

Matt McGarry is now with the Catholic Relief Services’ team in Pakistan.