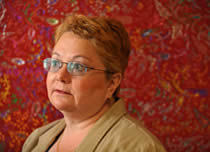 A productive day for Cynthia Mahmood, Notre Dame associate professor of anthropology, is the stuff of nightmares for many others.

“I walk nonviolently among the most violent people on Earth,” Mahmood says. “To win their trust, I interact with them peacefully and try not to be fearful.”

That isn’t to say she has done so unscathed.

When terrorists — or as she prefers to call them, militant extremists — want to meet with her, she considers the invitation an opportunity for ground-level peace building.

For two decades, Mahmood has conducted face-to-face studies of war and peace, documenting hundreds of stories about what life is like for people involved in violence and enmeshed in wars. She specializes in the Middle East and South Asia, especially India, Pakistan and Afghanistan, where there are religiously motivated terrorist militant groups. Mahmood agrees her work sounds sensational but insists it isn’t.

“Those guys wearing turbans are somebody else’s boy-next-door,” Mahmood says. “They’re sons and husbands, and once you get to know their culture you can sit down and talk to them.”

She does so in an effort to understand why people take up arms and how they view suffering, killing, martyrdom and death in the midst of violence. Her work with Sikh separatist and Islamic militant groups often has required her to suspend judgment.

“Talking to people doesn’t mean you agree with them,” she says.

The author of Fighting for Faith and Nation: Dialogues with Sikh Militants, Mahmood is the world’s leading expert on India’s Sikhs and their push for independence in the 1980s and ’90s. Previous decades had brought growing animosity and rioting between Sikhs and Hindus. Sikh requests for autonomy from the northern Indian state of Punjab, where adherents of the religion form a majority, were consistently rejected through the early 1990s. The rebuffs aggravated Sikh separatists, who called for the creation of “Khalistan,” an independent homeland for Sikhs. Mahmood believes approximately 100,000 people died in the brutal civil unrest and the Indian government’s efforts to suppress it during this period.

The attack on Mahmood

Mahmood became interested in the Sikhs while working with anthropologists on other projects at an Indian government institute in 1992. The only woman in the all-Hindu research group, Mahmood casually mentioned her interest in studying the Sikhs. It was an unpopular subject, and later that day Mahmood herself became a victim of extreme violence, when a posse of men she believes was sent to discourage her curiosity beat, gang-raped and knifed her.

The attack forced her to return to the United States, where her physical injuries took a full year to heal. But as soon as she recovered, she returned to India and began meeting with Sikhs who were aware of what she had endured and why. Many of them had suffered severe abuses at the hands of the Indian state, yet no one seemed to know their stories. Consequently, many of the Sikhs wanted to meet Mahmood.

“Some of the leaders of the Sikh movement invited me to dinner, and I told them I wanted to hear about their suffering,” Mahmood says. “Then, after years of documenting their narratives of torture and human rights abuses, and understanding that most people thought of the Sikhs simply as crazy, psychopath terrorists, I decided to write my book. To do this, I couldn’t portray them only as sufferers and victims, so I told them I knew they were also resisters . . . that they had committed terrorist acts. Eventually, I was introduced to some of the fighters, and I began collecting their stories as well.”

Mahmood regularly testifies as an expert witness on refugee, asylum and national security cases in courts in the United States, Canada and the United Kingdom. She also consults with those same governments on issues relating to the Sikhs, the Punjab conflict, the contested Kashmir region and women in South Asia. The work required Mahmood to explain to her Sikh contacts the important “information threshold.”

“I told them they couldn’t reveal anything about future plans or give me details about past acts, or I would have to tell it in court,” Mahmood says. “I wasn’t part of their group. I was a scholar. I had to frequently renegotiate the ethical and methodological terms on which we interacted so that a dialogue could be conducted and a book could be produced. But in the end, it was in our mutual best interest for a level of trust to develop.”

Mahmood’s dialogue project with the separatist Sikhs went so smoothly that they eventually introduced her to a Muslim mujahideen group fighting for independence in neighboring Kashmir, India. With far less time to build trust, she moved from one militant group to study another.

For the most part her work with the mujahideen was incident-free, but there were tense moments, including one while walking along a cliff path with a group near the Afghan border.

“The guy in front of me suddenly whipped around, poked me in the chest with his AK-47 and yelled, ‘We love Saddam Hussein . . . USA, no!’ I told him I don’t always approve of everything the U.S. does, but Saddam Hussein was a tyrant and maybe we should talk about it. So everyone sat down, and we did talk about it. After that the men began praying, and I followed along as best I could. Then I began the Lord’s Prayer, and they actually knelt with me and said it, too. It was an amazing moment of mutual recognition. They don’t hate Christians. They simply have political grievances, and those can be negotiated.”

Does Mahmood consider herself a “terrorist sympathizer”? Yes and no.

“I’m a pacifist, so I’m appalled by their methods, but I have a level of sympathy for their grievances,” she says.

Now Mahmood is working on what she considers her most important contribution thus far, an analysis of India as an example of the fragility of any democracy in times of terror. She warns terrorism can happen in any state that silences minority groups trying to protect their rights.

“The first book I wrote was about the Frisians, an ethnic group trying to protect its rights and language in the Netherlands,” Mahmood says. “They never turned to violence because the Netherlands protected their rights. The Sikhs and the Muslims are not naturally more violent. They turned to violence because they live in India, and India didn’t protect their rights.”

Mahmood, who was married to a Pakistani and has an adopted daughter from Pakistan, was raised in a pacifist, Mennonite community in Pennsylvania. She now counts some of her closest friends among people of diverse religions and cultures around the globe.

“There is a certain loneliness in what I do,” she says, “because hardly anyone stands at my particular intersection where anthropology, Christianity, progressive politics and Asian cultural sensitivities all co-reside.”

Of her brutal attack in 1992, which was never investigated or prosecuted, Mahmood says her Notre Dame students have helped her heal emotionally. She dedicated the publication of her personal account earlier this year in the journal Anthropology and Humanism to her graduate students at the University’s Kroc Institute for International Peace Studies. Some, she says, were fearful of going into the field.

“I wanted to show them that even if something like that happens, you can survive,” she explains, “and that the risks we take as scholars and peace-builders are worth it.

“This isn’t a mythic battle between good and evil,” she adds. “It’s an argument among men. What I do is actually what I think Jesus would do. I think he would approach those people we call terrorists and have a conversation with them.”

Shannon Chapla is an assistant director in Notre Dame’s Office of News and Information.