Jim Gibbons ’53 worked at Notre Dame for 43 years. He spent 37 of those years — from 1962 until his retirement in 1999 — in university relations as an assistant vice president and director of special events and protocol. That means he planned the events, handled the arrangements, put on the dinners, receptions and convocations, took care of the trustees, directed 38 building dedications and organized the campus visits of four U.S. presidents and a parade of international heads of state. He made sure flowers got into the rooms of important guests at the Morris Inn. He could get a room at the inn when visitors were told there was none. He always had the last football ticket and one more parking pass. He knew who should sit at which table and who should not sit next to whom. He did his job so well that, when President Gerald Ford visited in 1975, Gibbons was asked to come work at the White House. 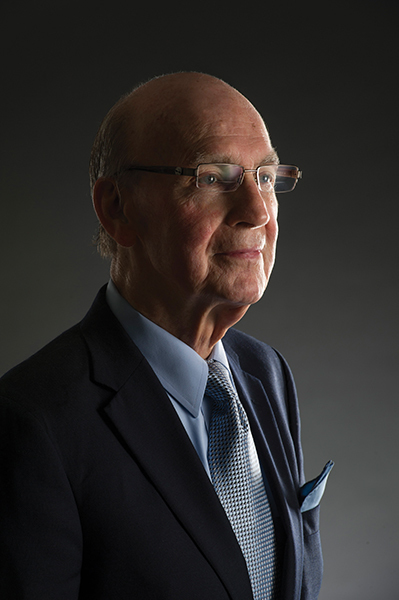 Back in the day, when I was new to the editorship of this magazine and so required to attend the university relations committee meetings of the board of trustees, Gibb — as fine a dresser as I have personally known — and I would sit at the far end of the long table. He would pass me notes that said things like, “Nice tie” and “Man, you’re looking sharp today” and “You’re the best.” We were like sixth graders in the back of the class — him grinning impishly and me so serious and afraid.

He was meticulous with detail, sought perfection, was driven by a desire to please. He epitomized, to me, the excellence and attentiveness, the grace and care and generosity of spirit that was Notre Dame. He called me every year on my birthday, didn’t miss a year, even long after he retired. The calls made me feel special; I wasn’t the only one. He made dozens of us feel good with those evening birthday phone calls.

A three-sport standout at Chicago’s Mt. Carmel High School, Gibbons came to Notre Dame in 1949 on an athletic scholarship and became a starter in basketball and baseball. All he wanted, he said, was to be a professional baseball player. He graduated in 1953 and signed with the Philadelphia Phillies. That summer, giving up a “600-foot home run” to future Hall of Famer Frank Robinson initiated him into the game’s next level, but his dream was officially derailed when he was drafted into the Army later that year. In 1956, teaching and coaching at his old high school, he took a pay cut to return to Notre Dame as an assistant baseball and basketball coach — a deal that included training-table meals and a bed in the firehouse.

Gibbons coached Joe Kernan ’68, who would become governor of Indiana. He coached Ron Reed ’65, who spent two years in the NBA and 19 seasons in the big leagues. He recruited high school star Edward “Monk” Malloy ’63. He managed Pittsburgh Pirates Rookie League teams in the summers of 1961 and ’62. And he made such an impression on Carl Yastrzemski during the Hall of Famer’s short stint at Notre Dame that the two became close, lifelong friends. Even in the coach’s later years, the pair fished together every summer in New England.

Bleeding ulcers and related cardiac arrest nearly cost Gibbons his life in 1962, and doctors recommended he get out of coaching. But he stayed close to the games he loved. He refereed high school and college basketball games for many years, and for more than two decades was a radio and television color analyst on Atlantic Coast Conference, Missouri Valley Conference and Notre Dame basketball games. His game preparation was fastidious; he said it calmed his nerves.

When he left the University, he didn’t stop helping others. For the next eight years, he volunteered with St. Joseph Regional Medical Center, working six hours a day, five days a week, calling discharged patients, checking up on them, talking about their recent stay — 41,000 calls by his count — and eventually making room visits. He also made daily trips to Holy Cross House, where the retired priests of the Congregation of Holy Cross live, helping as he could, getting them to Mass and lunch. His own lunch plans accommodated that ministry as well as his weekly lunches with the ROMEO (really old men eating out) group that included Ara Parseghian, longtime trustee Art Decio and the legendary sports information director, Roger Valdiserri ’54.

In 2012 doctors found cancer in Gibbons’ tonsils and lymph nodes, and the battle that almost took his life and removed the cancer also left him with no sense of smell or taste, and no saliva. But it did not take away his good humor and gentle, affectionate ways. Nor did the Parkinson’s. Jim was the nicest, kindest, sweetest guy I’ve ever known. No father was ever prouder of his kids, no wife more devoted than Betty Ann.

James V. Gibbons died October 2, 2017. He was 87. It was standing room only at his funeral Mass in the Basilica of the Sacred Heart. Lots of people knew him. He received many awards. He is remembered fondly. He was the best.