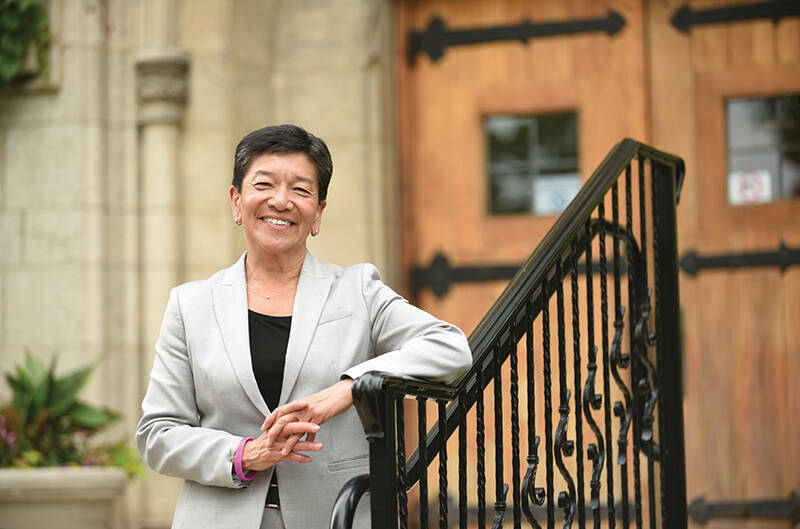 Mary Yu ’93J.D. spent years advocating for human rights in Chicago. She started as a secretary in the Archdiocese of Chicago’s social justice ministry, eventually becoming the office’s director. Fierce, articulate and determined, she worked in parishes across the city.

Among those good people, she also noticed an unwillingness to sell houses to Black buyers or to welcome low-income housing. These were “not stereotypical bigots,” Yu says. “They just could not get past that racism. That was what it came down to, and it was built on fear.”

“After 10 years,” she once told a television reporter, “I realized that it’s the law that really brings about change. So as much as I couldn’t change people’s hearts, I could change the way people behaved.”

Now 65, Yu is the first Asian American, first Latina and first openly gay person to serve on the Supreme Court in the state of Washington. Appointed to the court in 2014, she is now running unopposed for her third term. Before that, she served 14 years as a trial court judge for King County, which includes Seattle.

Yu was also the first person in her family to graduate from college. She grew up on the south side of Chicago, the younger of two children born to a Mexican mother and Chinese father, both immigrants who met while working in a factory. “My dad could not read or write because he didn’t have access to formal education,” Yu says. The couple sent Yu and her older brother to Catholic schools, determined their children would receive the education they had missed.

Growing up in a working- class household, Yu still didn’t think college was possible until a teacher at St. Mary of Perpetual Help High School convinced her otherwise. She would earn bachelor’s and master’s degrees in religious studies from Dominican University — then called Rosary College — and Mundelein College of Loyola University.

The Dominicans were not only educated but also socially aware, and they deepened these concerns in Yu. When she started working for the archdiocese, she says she didn’t know what to do in the job or where to go, but her boss said they’d figure it out together. And they did.

Yu was aware of social differences and inequities in the largely white neighborhood where she was reared. She knew her mother had picked strawberries during much of her early life, Yu says, so when the United Farm Workers organized a lettuce boycott, “I understood that in a way probably many other kids did not.”

In 2015, Yu wrote the majority opinion in Demetrio v. Sakuma Brothers Farms. The panel unanimously affirmed that farm workers who were paid per pound harvested should also be paid for necessary rest breaks. “Every case has a story,” Yu says in her clear Midwestern accent, “and this one personally touched me in the sense that I understood when one side was arguing how much a rest break is needed. It just seemed very simple, very human.”

When Yu began law school, less than 6 percent of Notre Dame’s 2,481 graduate students were minorities. Only two Asian American women and three Hispanic women were among the 184 members of the Law School’s first-year class, but it’s not clear how Yu was counted.

She was aware of assumptions some people held about her, but she focused on her work, which included being an assistant rector in Siegfried Hall. In that job, Yu found a renewal of her efforts in Chicago, helping younger women become more sensitive to justice.

These days, she says, she focuses on mentoring other minority lawyers and helping them develop their leadership skills. An avid runner, Yu also enjoys fine food, good wine and spending time with her two nephews. “Faith,” she says, is the core of “how I care about the human person.”

Friends and colleagues talk about her intensity and thoroughness: “If you hand her a soda can, she’s gonna read the back,” says Yu’s former bailiff, Rhonda Salveson. “If you hand her a 200-page brief, she will read it front to back.” And then she’ll have questions.

So what’s surprised Yu about being a state Supreme Court justice? The extent to which discussions among the justices are adversarial. But it makes sense, she adds. Instead of deciding cases alone, she argues with eight justices who are every bit as invested in a case as she is. “So there’s a lot of exchange,” Yu says. “Always respectful, but a lot of exchange.

“I just can’t say enough about how wisdom resides in every single person on the court,” Yu says, adding that such wisdom regularly changes her perspective. She once likened these deliberations to “turning a crystal.”

She understands the very human aspects of our human nature. Shortly after midnight on December 9, 2012, Yu officiated at the first legal same-sex marriage in Washington state. A Seattle wag wrote that Mary Yu had “the perfect name for the job.”

Now retired and living in Seattle, Cathy O’Donnell was a reporter for The Ann Arbor News.