Thousands of Domers from the “Deliver Us from Emil” era will readily remember beginning each freshman chemistry class with a brisk recitation of the Our Father. Some may also have a hazy memory of an attention-getting prelude to the opening prayer. Amid the zip of winter coats being removed, the stomp of boots shaking off snow or the chatter of a freshman feeling nervous, the professor would command, in a most sonorous bass voice (but somehow still lyrically): “Allllllrrrright. Settle down.” Only then came the most-oft repeated words of Jesus. And then 49 minutes of chemistry. 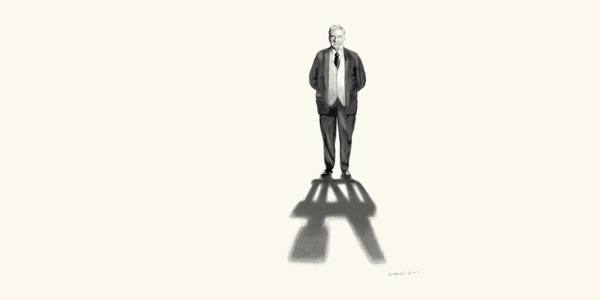 Over the last decade of Dean Emil T. Hofman’s life, as I enjoyed opportunities to spend a fair bit of time with him, “Alright, settle down” became an occasional mantra of mine — sometimes in his presence. My little tease was probably not always appreciated by the legendary professor, who died in July at age 94, but it was my only retort to the antics of a man who in his 80s and then 90s just would not stop. And I doubt Hofman ’53M.S., ’63Ph.D. had ever settled down. Life — whether family, work or vacations, service or social calendar, religious meditation or daily Mass — was to be carefully planned so it would be lived to the fullest.

World War II bombing runs during which he took shrapnel, studies at Seton Hall, Catholic University of America, Miami University and Notre Dame, then research and a doctorate and teaching chemistry to tens of thousands over four decades: Most folks would be satisfied with that career’s worth of accomplishments. But not Emil T. Hofman. He went on to design innovative science lectures, programs to train high school science teachers and Notre Dame’s groundbreaking Freshman Year of Studies. He helped Father Hesburgh, CSC, usher in coeducation at Notre Dame and mentored thousands as dean and adviser, not to mention frequently representing the University on the road as a speaker.

In the 1950s, he had returned to northern Kentucky to woo Joan Sherron, the hospital nurse who — five years earlier — had helped care for him after he was injured in a car accident during a trip to New Orleans. They married and raised Mike, Tom and Jim, and enjoyed a bevy of grandchildren. Life for Emil T. was about having an impact on the lives of others. And this man never stopped. He didn’t even slow down during his so-called retirement.

In 2004 the retired Dr. Hofman had sought me out to chat — a former student of his, then in my mid-40s — and to invite me to deliver the annual Emil T. Hofman Lecture the following year. But he also had a plan to get involved with the University’s commitment in Haiti (where I was working on strategies to eliminate elephantiasis). Hofman wanted to set up opportunities to encourage his legions of former students to conduct medical and other mission work in one of the poorer countries where the Congregation of Holy Cross was active. Haiti fit the bill.

As our initial discussions moved forward, I felt oddly apprehensive by this re-engagement with my old professor . . . even though a quarter century had passed since I took freshman chemistry, and I had become a professor myself. But as Emil began regular trips leading his former students to Haiti as head of “Emil’s Army,” I came to know better his incredibly playful sense of humor and to realize that any “intimidation” was the projected bravado of an impish teddy bear of a man.

It became routine for the irascible Hofman to play practical jokes while in Haiti: feigning sleep or even that he had expired while waiting for delayed appointments; scaring children with a glare and then embracing them with a laugh. He was notorious for generously supplying friends, patients, his translators and even nuns with some extra cash . . . or a bottle of rum. When he was feeling good, he would push his walker equipped with wheels around, giving gleeful orphaned children rides — even as he might risk further injury to his aged, sclerotic spine.

Such was his enthusiasm and rigor in maintaining his routine of pastoral visits to villages and schools, and to our patients and Catholic clergy and sisters that he would weaken himself and end up sick on the return home. At age 88, after fortuitously leaving Haiti just days before the devastating January 2010 earthquake, he landed in the hospital and under nursing care in South Bend for nearly two months.

Energy and passion marked Hofman’s life, and the professor always directed a portion of this energy to others. He wanted everyone to live this gift of life fully. As a great teacher, he expected much from his students. As a mentor to thousands, he was a demanding yet loving life coach. Whether planning details of each year’s Emil T. Hofman Lecture, discussing the guest list for one of Joan’s wonderful meals, having lunch with the grandchild of a former student, nearly getting frostbite from sitting on his “field office” bench too late in November or directing every detail of the latest video to entice those former students to accompany him on a mission trip, he just wouldn’t relax. He never settled down.

Although his body was giving out, his will to be relevant in people’s lives never did. So he persisted, often with abandon, to remain engaged. As I became comfortable enough to tease him, and ask him to “settle down” a bit when he would come up with too-ambitious plans and projects, he reacted with disappointment. I came to realize that the anxiety I had felt around the professor first as a freshman and later as a middle-aged professor myself was more accurately an awe — an awe of what he wanted and expected from me, which was my best.

As I started leading the rosary during the wake for Emil T. in the Basilica of the Sacred Heart last July, I felt that pang of awe once again. Would I pray this favorite prayer to honor Our Lady well enough here, and now . . . to Emil’s standards? And then it was clear: there I was, before the altar of the Lord — the same Lord before whom we all must stand in life and in death — and Emil’s model, his cajoling to do more and do it better, was still with me, this time, to pray well before the Lord God. The awe I felt at that moment was his awe for God, to whose everlasting embrace he had now moved. He just wanted to share it.

Rest there in peace, Emil Hofman, but may your spirit in all those many lives you touched, may it never, ever settle down.

Father Tom Streit is an associate professional specialist in Notre Dame’s Department of Biological Sciences and is the founder and principal investigator of the Notre Dame Haiti Program.