Even though I stayed as far away from science as possible, Emil T. Hofman was an august presence in my life as a Notre Dame freshman in 1970. Friends of mine, hoping to become doctors, took his first-year chemistry course and so were laden with his weekly, seven-question quiz each Friday.

It was boot camp, the crucible, the trial by fire. 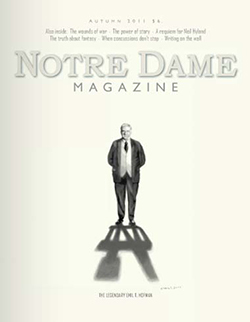 Thursday nights were devoted to studying for Emil; Friday lunch conversations were devoted to Emil and the post-mortem debriefings in which squadrons of stirred-up pre-med students compared answers: A or C on number 4, B or D on number 6, footnoted with rationales and groans, confidence, anguish and uncertainty.

Over four decades Emil T. taught more than 60 percent of each freshman class — 32,000 students. More than 8,000 went on to become doctors. And Emil T. became a Notre Dame legend.

Hofman ’53M.S., ’63Ph.D. also became the dean of the Freshman Year of Studies in 1971, was integral in welcoming the first female undergrads to Notre Dame in 1972, created the University’s Learning Resource Center and directed its Teacher Training Institute. His theatrical processions across campus to administer final exams to tense and jittery students lightened the proceedings with pomp and humor.

Hofman also made a dozen trips to Haiti to do service work, often recruiting his former students, now physicians, to lend their medical expertise to that afflicted population. He was well into his 80s when he led his final service trip there.

But Hofman was best known for his tough love, his demanding expectations, his hard-crusted warmth, and the individual care and attention he gave all his students. Over time he received more than 10,000 letters of appreciation from former students, and he walked down the aisle with Lena Jefferson ’90 on her wedding day. Eventual Nobel Prize winner Eric Wieschaus ’69 earned Bs from Hofman both semesters in his chemistry class — grades officially elevated to As decades later because, Hofman said, the Nobel had earned him extra credit.

His life and other such Emil T. stories were affectionately captured by Brendan O’Shaughnessy ’93 in the autumn 2011 Notre Dame Magazine. You can read that account, hailed by many as the best article they had ever read in the magazine.

Shortly after that article appeared, Hofman and his wife, Joan, a nurse he had met in 1952 when a car accident put him in the hospital for five weeks, showed up at the magazine offices late one afternoon with wine, cheese and crackers. The purpose was conviviality and gratitude and the bestowal of Emil awards on the writer and the magazine.

To many, and for generations, Hofman represented the best of Notre Dame.

Even in his early 90s, the beloved taskmaster and Notre Dame icon could be seen daily on a bench in front of the Main Building or attending daily Mass at the Basilica of the Sacred Heart. When he started missing those daily rituals this past spring, Notre Dame watchers knew an era was passing. Emil died July 11. He was 94.