Many cockroaches were harmed in the making of Andy Greco’s college education. He killed 60 of them one night in a massacre that Greco ’81 assumes must still be commemorated in the cockroach community.

Such were his financial circumstances as a Notre Dame student that he cobbled together shelter that included sleeping among the scuttling insects in the basement of LaFortune. He worked for a while in The Huddle scooping ice cream. Access to the room downstairs was one of the job’s perks. 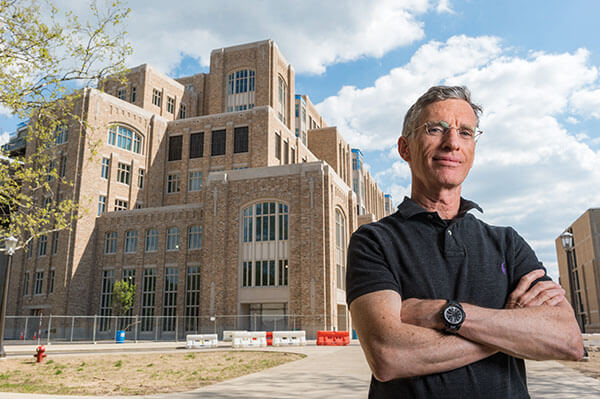 Andy Greco at the Crossroads. Photo by Barbara Johnston

What’s now a barbershop was then an unheated empty space. Winter nights were frigid until a secretary in the international studies department got him an electric blanket.

One Christmas break, a friend helped him find a job at a dog food factory. There he earned the money to buy his first winter jacket, an upgrade from the “thin cotton coat with no buttons” that had been his only outer layer for two years.

That’s how Greco got by. Loans covered his tuition, barely, but room and board required creative scrounging. He was a regular visitor to the Main Building, asking after campus jobs, showing up in person out of necessity as much as persistence. There was usually nothing available right away, so staffers would suggest he leave a number where they could reach him if something came up, “and I’d say, ‘I don’t have a phone, so I’ll just be back.’”

By some fortuitous patchwork — of odd jobs, sacrifice, generosity, luck and unfortunate free haircuts from a friend — he made it through. It took six years because the friend with the scissors, Rick Anderson ’79, also introduced Greco to civil engineering, which became his second major in addition to government and international studies.

Falling in with the Anderson family shaped much of Greco’s future. Rick and his brother, Gerry Anderson ’81, became close friends, and soon Greco was almost a part of the family. The Andersons’ father was himself a structural engineer and a man Greco admired. Like his sons, Greco would follow in those professional footsteps.

First he had some catching up to do. His scientific background at that point in his college career was, legendary professor Emil T. Hofman once told him, insufficient for his chemistry class. Greco could not argue with that, but he lingered in the back of the room and passed. Rick Anderson, meanwhile, gave him a crash course in trigonometry that began to get Greco proficient with those mathematical concepts, or at least acquainted with the terms sine and cosine.

Rick, who was struggling under the engineering workload himself despite having the necessary academic preparation, frankly doubted Greco could get up to speed. First Rick, then Gerry served as personal tutors. That and Greco’s preternatural determination led him to the unlikeliest of civil engineering degrees.

“He works harder than almost anybody I’ve ever known,” Rick Anderson says. “Disciplined, conscientious, persistent. He is the embodiment of persistence.”

Meeting the academic demands while working seven days a week, all under the shadow of what failure in either area would mean for his future, left Greco with nothing resembling a normal student life. Margin for error was another concept with which he was unfamiliar.

“You’ve got to make it, right? There’s no option,” he says. “I can’t just go out and have a good time, because that might undermine my existence.”

When Greco tells the stories now from the perspective of an accomplished professional, a husband and father of two, the 60-year-old sounds no different than any other nostalgic alum. From the jobs — menial, temporary and paid accordingly — to the limitations his destitution imposed on him, to the kindnesses and coincidences that kept his spirits afloat, Greco recounts the old days with smiling equanimity.

“I didn’t think of it as hard,” he says. “It wasn’t painful, it was just something you do.”

The memories come back to him like he’s rooting through a box of old snapshots, disconnected and each its own diversion, but developing into an impressionistic picture of a student experience that probably never will happen again.

Managed dorms during summer camps. Reorganized the library card catalogs. Found a bike in the library reflecting pool. Waited tables during Junior Parents Weekend. Bartended at reunions. Lived on one meal a day in the summers, usually mixing cereals together. Maintained the Corby Hall cars for the priests. Stained the Notre Dame Stadium bleachers.

All of which would be interesting enough, in and of itself, but there’s more. Greco, to this day, continues to do odd jobs around campus. You know his work, even if he remains as anonymous as he was while hunched over a tub of ice cream in The Huddle.

Greco’s company, SDI Structures, is the engineering firm on the Campus Crossroads project adjacent to Notre Dame Stadium. Before that, the Compton Family Ice Arena. The firm is also involved with the Harris Family Track and Field Stadium, among other projects, past and future.

On a working visit to campus one sunny May afternoon, Greco sits outside near Legends. His sightline tracks toward O’Neill Hall, rising on the stadium’s south end. Above the growl and whine of construction equipment, he describes the 750,000-square-foot project, which also includes the Duncan Student Center on the west side and Corbett Family Hall on the east, from his point of view.

He sees beyond the façades to the bones. In his mental X-ray, he identifies the engineering challenges related to the location next to the existing stadium and the architectural specifications.

“Most buildings have lateral forces that are from wind or seismic events, this one actually has a lateral load from gravity,” he says. “It’s actually wanting to lean over.”

Greco’s job: keep it upright. Or, as he puts it, “make it buildable,” transform the client’s wishes and the needs of his colleagues in architecture and construction into something concrete.

SDI Structures, based in Ann Arbor, Michigan, has established a reputation as a company that solves complicated problems. After completing a master’s degree at the University of Michigan, Greco started the firm in 1991 with an architect partner. Soon an important project came their way.

When another company exceeded the U of M’s budget with a proposal to replace rather than repair a dilapidated concrete floor, the job landed in SDI’s lap. Like he had done all his life, Greco found a way, opening the door to more work on the Ann Arbor campus.

“We were hungry,” he says, “and we were always after: What is constructible?”

In his firm’s case, the answer seems to be just about anything. Including what’s considered the largest cantilevered building in the country, completed in 2007 as the Lamar Construction Company’s headquarters near Grand Rapids, Michigan. Since sold to MFP Automation Engineering, the building’s upper level offices hover above what was then the construction company’s garage and carpentry facility.

“That was the case of an architect who had their engineer say, ‘No, you can’t do this.’ So that architect came to us,” Greco says. “Highly technical challenge.”

Accepted and met, which should come as no surprise, considering his entire adult life has been a study in staying upright without visible means of support.

Greco grew up in Japan, the son of an Australian mother and an American father who worked in the country as an alcohol and tobacco salesman. He attended a Catholic boys school in Yokohama. It was not a happy childhood.

His father was an alcoholic, and when Greco was a teenager, his mother left. “She just disappeared,” he says. He and his mother have since reconnected, but at the time Greco had to face the prospect of college essentially alone and penniless.

As a noncitizen, he couldn’t stay in Japan. Going to Australia would have meant repeating his senior year of high school. It would be U.S. or bust. He didn’t know much about Notre Dame beyond the name, but he warmed to the sound of “our mother” and applied. Notre Dame denied him admission.

Rev. William McInnes, S.J., the president of the University of San Francisco, had made a recruiting visit to Greco’s high school and put USF on his radar. He enrolled there and, as a freshman, got to know McInnes, who wrote a recommendation for Greco’s successful Notre Dame transfer application.

After one year in Keenan Hall, Greco no longer had the money for campus housing, and so began his migratory existence from LaFortune, to summers at Dillon in exchange for managing the dorm during sports camps, to a stint as a Cavanaugh resident assistant. All that still beat the summer in San Francisco before he came to Notre Dame, leapfrogging from professors’ office floors to friends’ couches.

“Having come from that to living in a Notre Dame dorm or at LaFortune felt like an enormous blessing,” Greco says. “It felt like I was with family.”

Along with the Andersons, enough people treated him like family to sustain his odyssey. Professor John Mihelich, for example, gave him a job in the physics department at a particularly perilous financial moment, despite Greco considering himself singularly unqualified for the position. Something about germanium in lithium gamma-ray spectrometry, impenetrable to the poli-sci and civil-engineering major, plus fun stuff like freezing bananas with liquid nitrogen.

“I realized this guy really did an act of kindness,” Greco says. “He probably saw that I was struggling and, bam, I got a job in the physics department that pulled me through.”

His own hustling had as much to do with him making it through. There were so many jobs, it’s hard for him to remember them all, or what he did when. He delivered campus mail. Worked in the Main Building printing office. At the Snite. Painted dorm rooms. And groundskeeping, the heading under which staining the stadium bleachers fell.

Greco and a Nigerian economics Ph.D. student who sang Latin Mass songs worked together on that project. Up the stadium steps they hauled 40-pound buckets of Penetrol, which they applied with rollers.

For someone working on the same job site where he spent a summer as a college student, Greco’s come a long way. His circumstances, like the stadium and the campus around it, have been transformed in the decades since, but the fortitude that led him here remains steadfast.

“It’s not a ‘get-it-done-and-go-home’ job,” he says of the Campus Crossroads project. “This is where everyone is working Saturdays, Sundays, nights.”

Greco’s accustomed to that kind of work schedule, the engine of the journey from his personal crossroads to this one, up and away from Notre Dame and back again.