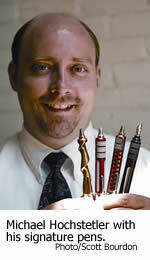 Back in high school during the 1980s, Mike Hochstetler developed a large, painful callus on his writing hand. After enrolling at Notre Dame and enduring more discomfort, he figured out how to cure the problem. Today the remedy has become his life.

Hochstetler ’93 is proprietor of Michael’s Pens. In his one-person enterprise, he designs every model (23 so far), assembles each personally, handles all the distribution, keeps the books, writes and prints off promotional brochures, travels the country’s pen-show circuit as salesman and maintains his company’s website. To hear him talk, he’s living a several-year daydream.

In his marketing-major days on campus—and before the ergonomic trend in writing instruments—Hochstetler invented what he called The Worm. Initially whittled out of soap and wood, the spiral, screw-like design resulted in a pen intended to relieve writer’s cramp and prevent calluses. “I tried to maneuver as many ways to bring it to market,” he says.

During his last two years at Notre Dame, Hochstetler developed prototypes of The Worm, displaying it at trade shows and ultimately licensing the 99-cent pen to a Taiwanese importer. On a trip to Asia as a senior, the Bremen, Indiana, native watched The Worm being made in Taiwan and exhibited it at the International Stationery and Office Products Fair in Tokyo.

While media coverage tracked his success, Hochstetler gained two U.S. patents for his ergonomic inventions. Mass production and distribution created sales to Wal-Mart and other retailers in this country and abroad.

But, in Hochstetler’s view, The Worm turned in the here-today, gone-tomorrow marketplace of fad-oriented, disposable products. Although modest royalties came to him from the licensing venture, competition from other user-friendly pens and pencils spelled the end of The Worm in the mid-1990s.

For a decade after graduation, Hochstetler pursued marketing and other jobs in the Chicago area. Yet he never abandoned his ambition for invention and of being the head of his own company.

“I know it sounds cliché,” he says, “but in middle school through high school I liked reading the stories about people who had made something from nothing. My book reports would always be the biographies of people like Henry Ford and Walt Disney.”

Hochstetler’s “eureka” moment of inspiration for Michael’s Pens occurred at a Wal-Mart as he surveyed row after row of products. He considered adapting his earlier idea of a comfortable-feeling pen by designing distinctive, durable ones people would want to use and keep.

Incorporating the patents he’d already received, Hochstetler created prototypes for two now-trademarked lines: the Fat Boy and the Arcangelo. Both are machined out of aircraft-quality aluminum bars from American suppliers—and would never be confused with mass-produced, throwaway stick models.

Creating one Fat Boy involves a four-step process carried out across Indiana. Once the barrel and tip are made at a shop in Franklin, Hochstetler takes the barrel for anodized coloring in Indianapolis. A company in North Webster adds laser markings before Hochstetler completes the assembly in his Bremen home.

Proud that each Fat Boy is manufactured in America (almost unprecedented for the pen trade today), Hochstetler’s only regret is that the internal, retractable mechanism needs to be ordered from Germany. Nobody in this country does such work any longer.

Given the girth and weight of the barrel, Hochstetler adds rubber rings near the pen point for comfort. “It’s all about the grip,” he says, “but it’s really about style.”

To meet the demand of a change-conscious marketplace and the collector clientele, he constantly develops new and different Fat Boy designs and colors. Some models he makes exclusively for specific merchants such as Levenger, the Florida-based company specializing in tools for readers and writers.

“He takes a lot of pride in what he makes,” says Frank Weissman, retail manager for the Levenger stores in Chicago and himself an avid pen collector. “At Levenger we’re always looking for new and innovative pens. Mike is as original as they come in the designs he’s developing.”

Although Hochstetler is involved with each Fat Boy, which cost on average $95, he personally mills, sands and polishes the spiral-shaped, Worm-resembling Arcangelo, priced at $195 and named for his Italian immigrant grandfather. “I probably would have been a machinist in another life,” he says.

Hochstetler realizes that launching Michael’s Pens is a considerable gamble—and that most inventors are colossal dreamers. But his company’s growing, and he’s even started a Fat Boy Club. “The pens just keep on rolling,” he says, adding with a marketeer’s bravado: “People want a pen made in the USA.”

Robert Schmuhl is professor of American Studies and director of the John W. Gallivan Program in Journalism, Ethics & Democracy at Notre Dame.