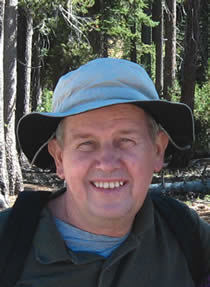 This isn’t Don Nelson’s final issue. But it’s close. By the time you read this Don will be working on his last issue of Notre Dame Magazine. He’s retiring in March 2010.

You probably don’t recognize the name. Don Nelson, who holds a 1991 master of communication arts degree from Notre Dame, doesn’t get a byline. But for 35 years — for almost the entire history of this magazine — Don has been its art director.

That means Don has been responsible for the look and the feel of the magazine for decades — the visual design and layouts, the artwork, the covers, the typography, the paper, the architecture of each issue. He has directed the photographers and artists who contribute their work to our pages, and he has illustrated stories and lent his own photos and created covers and shepherded each issue from concept through press checks.

I had worked here for more than a decade before I learned to appreciate Don’s vision of things. I always liked going into his office. I’d look at the pictures and paintings and mock-ups. His toolbox was always more interesting than mine. But it wasn’t until I became editor in 1995 that Don and I talked about why the magazine looked as it did and the philosophy behind it.

For decades Don has created a magazine for the mind, heart and soul with a light enough touch to make readers want to dig in. He’s aimed to make a thoughtful, somewhat serious magazine that is appealing, engaging, inviting — a magazine to be read, to spend time with. In fashioning the University’s flagship publication, he had to balance the institution’s traditional tastes with a flair for the surprising and fresh.

Except for his ability to keep the magazine from ever getting staid or stale, what has perhaps impressed me most is Don’s talent for illustrating dauntingly difficult subjects. How would you illustrate essays about evil or freedom or God? A cover package on homosexuality? A bundle of stories on the good life, a feature on the Catholic imagination, or yet another article on global warming, immigration or Third World poverty that’d make you want to go there again? Don never settled for the predictable, never resorted to the cliché.

Don’s career spanned a revolution in the way magazines are built. I remember when he laid out dummy pages using tissue-paper galleys, an X-Acto knife and hot wax. Everything is digital now. Each issue is a humongous data file we share with the printer. Don is the one who pulls it all together, makes sure every detail is correct and precise, each color true.

In the world of magazine publishing there’s a widely acknowledged tension between the editor and art director, and expected arguments over space and vision and what each is trying to do. Don and I have navigated this relationship with only occasional irritations. These usually end with Don teasing, “Remember, I’m the one trained in the visual and fine arts.”

Long ago Don told me one tenet he found interesting about doing the magazine is that each issue starts with a cloud of ideas, and that the good ideas get discussed with writers who turn concepts into stories translated into type to be flowed over pages with accompanying art, precisely laid out and printed on paper to be cut, folded, bound and mailed. Each issue we start fresh with nothing, and each quarter we make a little book, we make our mark.

Don and I started talking about his retirement when he turned 65 a couple of years ago. This past summer, as July turned to August, he daydreamed about how nice it’d be next year to make his annual spring trek to Utah and then travel throughout the summer. But he agreed to stay through the spring issue, to make his mark a few last times.