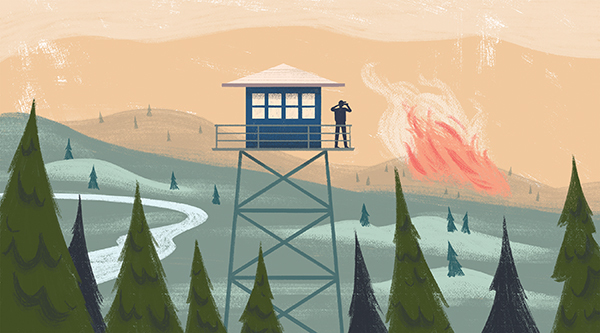 I was pacing the catwalk, watching a herd of elk move from one binocular lens to the other, when I heard the thunder coming. To the south, storms drifted slow and dark above the mountains, carried by winds and rustling needles on the nearby pines. Sure enough, there they were: a charcoal fleet of anvil clouds, blockading the sky and trailing virga like ghostly wraiths of vaporized rain. Birds fell silent. The air was hot and still. Then a tongue of forked white fire flashed onto a ridge and faded with a wisp of smoke.

I picked up the radio and pushed the transceiver.

Across the American West, solitary sentinels guard high peaks — struck by lightning, battered by winds, eyeing forested mountains to spot the beginnings of a burn. My introduction to fire lookouts — to living alone on top of the world — took place in northern California when a single-track trail ended in a staircase cut from stone. The steps led to a long-abandoned tower, its skeletal frame white beneath the moon. I tried to imagine rising in this many-windowed roost and washing every morning amid the solitude of silent stars. The tower haunted my mind with a pull akin to human love, and when I learned a few U.S. Forest Service lookouts were still staffed each summer, it was settled. I was going to be a fire lookout.

The town of Darby, Montana, sits at the base of the Bitterroot Mountains. It’s a place where chainsaws hang from the ceiling of the old saloon and where you might walk into the grocery store behind men with .44 Magnums holstered on their hips. The first time I ordered a beer at the bar, a woman one stool over welcomed me with the words, “Stranger danger.” She’d been there so long the stool had become part of her legs; had she stood up to leave, it probably would have walked out with her. Her tenure was as strategic as it was convenient. When regulars began throwing darts, all she had to do was swivel in her seat.

In June, I drove 40 miles from Darby to live in a lookout at 8,117 feet on the Montana-Idaho border. Hell’s Half is a 15-by-15-foot room with 27 windows built on a cinder block basement, its wraparound catwalk overlooking the largest unroaded wilderness in the Lower 48. It’s a place where you rise with the sun, where animals can kill you, and where every day offers a front-row view of our warfare with fire, our elemental friend and foe. It’s also my home for the four months of fire season. There’s a bed in one corner, a wood stove in another and mountains to overwhelm human memory.

The job description is simple. On clear days you can see for 50 miles in every direction. The lookout scans each ridge and ravine for smoke. When fires appear, you man the radio, relaying messages to crews in the backcountry. Apart from two good eyes, the only essentials remain a hand to cut firewood, an affinity for lightning and comfort in solitude. It’s as close as you can get to a modern Walden Pond, but not even Thoreau had a view like this.

There are two kinds of people in life — those who envy the lookout experience and those who find us clinically insane. The two questions visitors ask usually involve how lonely I must be and whether I’ve gone crazy yet. Reluctant to leave their cities and air-conditioned cars, they have missed the central secret of a lookout’s joy: these mountains are alive. In days spent watching light change color on distant slopes, in the comings and goings of bear and moose, the tower looks into the human spirit as much as out to growing storms.

When I say these mountains are alive, I also mean they have life living in them. On a day off, you can take a fly rod and walk down a trail to watch clouds move in and mist the mountains with rain. Along the trail, you pass a subterranean city of Columbian ground squirrels, each jeering your steps with a salvo of loud squeaks. There is an unnamed meadow here, a chute of wildflowers carpeting the mountains in gold and purple and red before falling away to overlook the timber country and gray peaks beyond. The wind is cold and the rain cool and lovely with the fresh scent of wet pine needles covering the earth.

Twisting through honey-colored grass and into the trees, the trail leads to the Selway River. The Selway is an emerald artery of life, a serpentine tributary flowing 100 miles through the mountains and carving canyons on its course. The water is clear with blue pebbles along the bottom, and cutthroat trout find shade in slow, deep pools. Rapids running hard over boulders echo off rock walls and shroud the water in mist.

The fly line moves like a fluid whip — leader reaches for riffles and the fly lands like fluff from a cottonwood, floating on a sheet of green and blurring branches reflected on the surface. I watch it for a while, swaying on currents above submerged trees. A dragonfly flits onto my shoulder. Then the decoy disappears with an explosion of water into the mouth of a charging trout.

The rod jerks and tugs as he makes his run, neon line spooling out of sight and zipping back and forth around the pool. I reel in slowly. Then the trout appears, and he is beautiful, a dark back with fluttering gills drifting in the clear green water. He is in the net now with silvery sides and blood-red slits beneath the mouth. With the hook removed, he darts back into the depths.

Cast again. Once in a while my family will phone with news of the outside world. It feels detached and unreal, a distraction from the daily cycle of keeping fed and watching for signs of smoke. Life here moves in different terms — the glow of embers at night, mule deer tracks left in dust, the shadow of a trout as it swims upstream. Instead of millions of people in one city, here there are a million acres for one person.

Now another cutthroat finds the net. Had I lived a hundred years ago, my first instinct would be to gut it for meat. Today I move to take its photo. Why? To post to Instagram, a digital trophy measured in views and weighed in likes? The mountain lion no more advertises its catch than does the hawk. If once we killed the things we loved, now we freeze their image in a glory of pixels.

This reverie is interrupted when a fisher with sleek brown fur slinks out of the brush and slips into the water, ending my casting for the day.

My net is empty; my soul is full.

While a century ago it was last call for North American wilderness, it now seems to be last call for North Americans. In the city I see a people determined to subdue wild things and forget our original world of quiet and claws. Trees we domesticate in geometric parks; animals we watch behind bars in zoos; meat we buy in red squares wrapped in cellophane. All this has made us safer from risk, but I sometimes wonder whether security comes at a cost.

In one sense, wilderness has become an image to consume — on Instagram, on calendars, on weekend specials seen from couches. Humans are attracted to the permanence of stone, and indeed I returned from fishing that day to find other boot prints near my tower. The boot prints led to the basement, where some thoughtful crusader had scratched “TITUS 2:11” into my lookout. I’m not sure why the visitor was digging for God in those cinder blocks. All they had to do was turn around and take in the view.

If there is a lesson to be found in the lookout, perhaps it is this. In returning to a simpler, unpeopled place, you find your mind and body turning to the basic core of who you are: hunger, thirst, fire, rain and a union with life itself in the silent mountains and smallest birds. This is permanence of a different kind. Rather than the oblivion of urban sprawl, these rivers still run as prophets of the simple, clear and true.

A day in the woods is never a day wasted. There is effortless bliss found watching rain fall in curtains over distant peaks. One range moves into another, the sunset blurring ridges like papier-mâché crags, a watercolor painting set against the sky. Their outlines become blue, done by the hand of glaciers long ago. You can still visit these places and be restored by them. You can know our ancestors once dreamed of towers on the mountaintops, falling asleep while wolves howled outside the windowpanes.

Austin Hagwood’s essay won first place in this magazine’s 2017 Young Alumni Essay Contest. Hagwood earned a Master’s degree in social anthropology from the University of Cambridge in 2017 and will spend this year conducting research in Papua New Guinea through a National Geographic Young Explorers Grant and Fulbright Study/Research Award before returning to Hell’s Half Lookout.