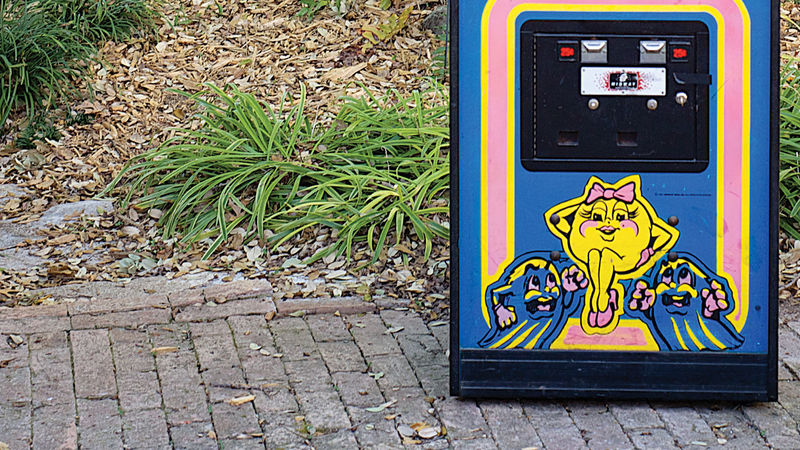 Truth be told, I was drunk when I bought the Ms. Pac-Man machine. Maybe “drunk” overstates it. Squiffy, though, for sure. My favorite dive bar, a few blocks from White Rock Lake, in my leafy East Dallas neighborhood, was closing forever. A local hedge fund, one that happens to be run by a big-game hunter who has publicly said he enjoys giraffe jerky, had bought the building and raised the rent. So on the last night, they sold everything in the bar, piece by piece, to the highest bidder. The mishmash of chairs and tables, the Tiffany-style stained-glass Schlitz chandeliers hanging over the bar, the shuffleboard table and, yes, the Ms. Pac-Man standup arcade cabinet in back — they could all be had for the right bid, recorded in a spiral notebook.

I spent a good portion of the early 1980s in video game arcades. Ms. Pac-Man was never my favorite. I’d play Defender or Galaga or Vanguard if those machines were open. Maybe some Berzerk. I was into outer space and lasers and shooting stuff in outer space with lasers. But I also appreciated versatility, because girls at the roller rink seemed to prefer cute stuff like Donkey Kong and Ms. Pac-Man. So I developed a proficiency — with the games, if not the girls.

And there she sat, many years later, after midnight, waiting to be taken home. But for what price? A quick search of eBay on my phone suggested that a Ms. Pac-Man machine in good condition was worth about $1,000. So I bid half that, with three thoughts informing my decision. First, no way would the lowball bid win. Second, if it did win, bringing home a Ms. Pac-Man machine from the bar would drive my wife positively insane. That alone would be worth $500. Third, when she finally threatened divorce, I could easily unload the thing, perhaps for a small profit.

A buddy with a truck helped me cart Ms. Pac-Man back to the house in the sober light of the next day. I put the machine in our den, which actually had a perfect space for it (as far as I’m concerned). I plugged it in, opened the coin door and put 20 credits on the machine. At which point my 9-year-old daughter and 16-year-old son looked at me like I was the best father in the world, the father they’d always dreamed of but could never let themselves hope for because no way could any father ever be that awesome. Maybe I’m projecting. I don’t think so.

There followed approximately one solid month of nonstop Ms. Pac-Manning in my house. I had to take breaks to go to work, sure. The kids had to go to school. We must have slept and eaten, but otherwise we were standing at that machine, working the joystick, eating pellets, trying to outwit Inky, Blinky, Pinky and Sue. 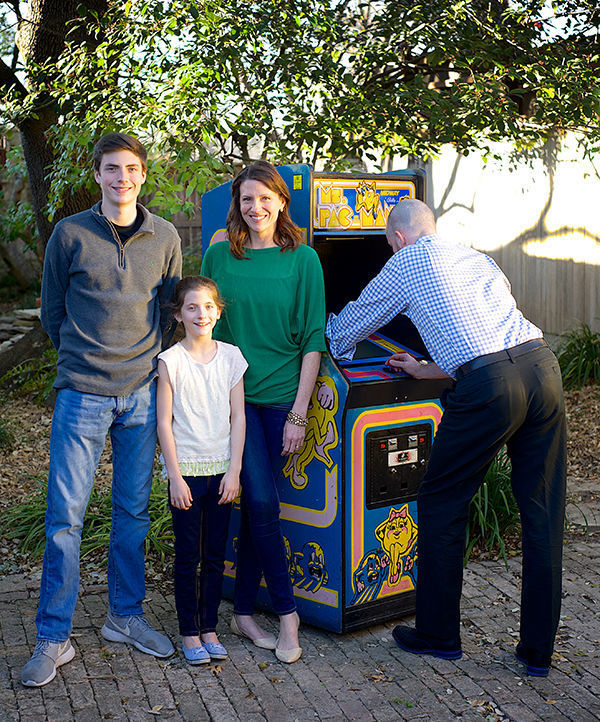 You know the names of the ghosts. Or ought to. What you might not know: Unlike its male progenitor, Ms. Pac-Man employs a randomness that defeats rote memorization of patterns. Pac-Man can be solved. Ms. Pac-Man has to be played. You have to be alert at all times, watching four ghosts simultaneously, understanding their typical behaviors but also constantly preparing for deviations in those behaviors. In other words, you have to be present. As boards are cleared and the pace quickens, nothing else in the world can occupy your mind if you wish to advance and see the next intermission, the scenes in which Pac-Man and Ms. Pac-Man chase each other and eventually produce Jr. Pac-Man (the coitus happening off-screen, and quickly).

In the first few months, my son and I had epic battles, our scores being approximate. We bet each other chores and pushups. But soon enough I was able to wake up the echoes, as it were, and reap the rewards of all those hours invested in arcades during my youth. He couldn’t touch me. At night, we turned off Ms. Pac-Man, which erased the high score. So we kept tally on a sheet of paper taped to the side of the machine. Our names alternate at the top of the scores column, then it’s all Dad, all the time. I taped a $20 bill to the machine, a prize for anyone who could best my score. It’s so beyond his reach that he doesn’t much care and has essentially retired from the game. I’m raising a loser.

But not my daughter. She continues to play for the love of the game, even though I quintuple her score every time we face off. I grab the top of the cabinet and hover over her as she stands on her tippy toes, leans hard on the joystick, rushing for an energizer to turn the ghosts blue. When she loses a life and laughs about it, I take the stick, and she, in turn, watches, oohing and giggling as I narrowly escape Inky to eat a banana.

I am reliving my childhood as she delights in hers. It is one of the few, maybe only, activities that we enjoy with equal relish. The only downside: It doesn’t seem to bother my wife one bit.

Tim Rogers is the editor of D Magazine in Dallas. He won the 2012 National Magazine Award for profile writing.