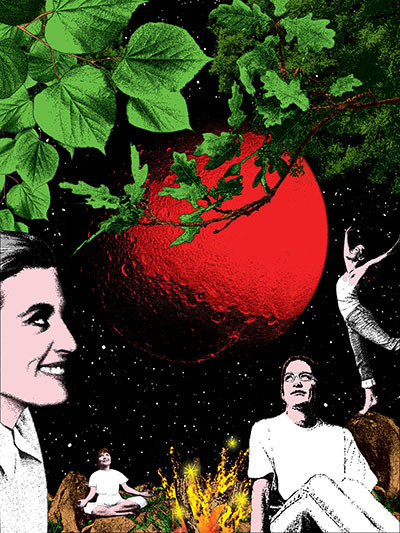 We had the idea because my godmother, Jude, had cancer. Or had had cancer — we were waiting to see. And my sister, Lauren, was heartbroken and had been for the better part of a year. I was unemployed. My mom, being a mom as well as a sister to Jude, felt and suffered from our pain, too. In short, we weren’t in great shape.

Plus, we were all four of us together — which was rare, as Jude lived in Alaska and the rest of us lived in Illinois — and there was going to be a blood red supermoon total lunar eclipse — which was even rarer. So we devised a moon ceremony, as four women like us are apt to do.

To start, I researched. As we all sat on my mom’s patio that morning with our bare feet perched on the table, wrapped in sweaters, hair tangled, Jude’s hair gone, I read aloud off my phone from all manner of new-age blogs and reputable news sources:

This sort of moon hasn’t occurred in 30 years. Its hugeness and brightness is due to the fact that it is much closer to Earth than usual. It looks red because of a color phenomenon known as Rayleigh scattering. A full moon is good for healing, energy recharging and meditation. A supermoon is even better for this. The light from a supermoon is purifying. It is easier to acknowledge emotions during a supermoon, making this an ideal time to clear your chakras.

Pulling from these, we patched our ceremony together. And dubbed ourselves the Lunachicks.

To start, we all wore white — out of respect for our Moon Mother, who, that night, would actually appear red, but you get our drift. Next, we began when it got dark by burning incense to cleanse our surroundings. My mom did not like the scent of said incense, and so the burning was brief but, we decided, effective.

Next, we shared what we’d contemplated and written out earlier that day: the negatives we wanted to let go of, the blessings we were grateful for and the happenings we’d like to manifest in the future. The immediate future, please, Mother Moon. Chop chop.

First up, what we were grateful for, our thinking no doubt shaped by our Catholicism, was that one should say thank-you for the many wonders in our lives before asking for anything else. God and Mother Moon deserved gratitude, after all. We went around our little circle, Thanksgiving-style, and listed these one after the other.

We subsequently did the same with the progress and spiritual growth we wanted to manifest. Our intentions and just straight-up pleas to the universe: Take away Jude’s cancer — banish it; heal Lauren’s heart — bring her a good love; send me a job; guide my mom in her new retirement. Our manifestations, or at least mine, stretched far longer than our gratitudes.

Now before you scoff or laugh or shake your head in disbelief, consider this: The moon is responsible for the tides of our gigantic oceans, its phases shape the behavior of animals and, to this day, full moons get the blame for our bad dreams, off-kilter emotions and even acts of lunacy. Who’s to say how the moon might redirect energy in our favor?

Sometimes, you desperately want a redirection.

When Mother Moon rose and the time of the eclipse drew near, we realized with alarm that we couldn’t even see her from our spot on the patio so we trotted through the grassy side yard, still barefoot, to the driveway. There she was. A bright orb hanging just below the trees, her light glimmering through. We stood and we gazed and then we hauled a few chairs from the patio as it became clear that Mother Moon was in no hurry to have her glory eclipsed by the much brighter, much flashier sun.

Then, in plain view of all our neighbors, we started a fire.

Or at least we tried. Because we’d decided it was necessary to integrate fire into the ceremony. The Internet said. With a candle lighter, we lit the pieces of paper on which we’d written the negatives in our life — disease, fear, despair, anger, a lack of confidence and purpose. All of it we wanted to go up in flames. Granted, flames that were enclosed in a disposable baking tin.

Fittingly, it was difficult to get these to burn. We prepared ourselves for a satisfying flare, a curling surrender of blackened paper. But whether because of the wind or the humidity or the type of paper or our own ineptitude, the scraps stubbornly refused to hold the fire for long. We huddled over that baking tin in our white outfits — Lauren particularly fetching in a long satin bathrobe — clicking and re-clicking the lighter until the paper scraps were sufficiently charred.

The contents of that paper were the pain points of a difficult year. Beside us, Jude would soon have to head to bed. The multiple rounds of chemo over the last few months had drained her energy. Though not her positivity. Or her appetite or her beauty or the melody of her soothing voice. When Lauren and I were young and Jude would visit, she would play with us for hours. At bedtime, she would lightly rub our backs and, in that lovely voice, tell us stories about magical places. A city made entirely of sunflowers.

In the moon’s glow, we all willed her back to health. We were all hopeful. She’d finished her last round of chemo, she’d caught her cancer early; her future looked good. In the moment we were scared, but it was a tamped-down fear that had been allowed to grow only to a certain size. Over a year later, her hair now grown into a pixie cut, her port gone, I still pray that cancer continues to leave her alone — this time, forever.

For my sister and me, it was the kind of year in our not-quite-so-young-adulthood that humiliated us, serving, we could only assume, as a reminder that there was still a lot left to learn and even more out of our control. The kind of year we would look back on as a blessing in a noteworthy disguise, one that liked to kick us while we were down but that also deepened our inner strength and wells of empathy.

We could not know, feeling dejected and sapped as we did, that just a few months later I’d have two full-time job offers, and, just a few months after that, Lauren would reunite with the breaker of her heart, both changed people. And that this time, it would stick.

For the moment, we just gazed up at the sky.

With the lighter extinguished and our ceremony complete, we all found spots in the chairs or on the grass leaning back on our hands with our legs stretched out before us. We stared at that celestial sphere as her glow got brighter and then began to diminish when the eclipse, ever so slowly, began.

We sent our manifestations out into the universe and we hoped.

Later that night, the moonlight streamed through the east windows as we slept, and our energy rearranged itself into intention.

Elle Metz Walters is a copywriter at agencyEA in Chicago and a freelance writer and photographer.