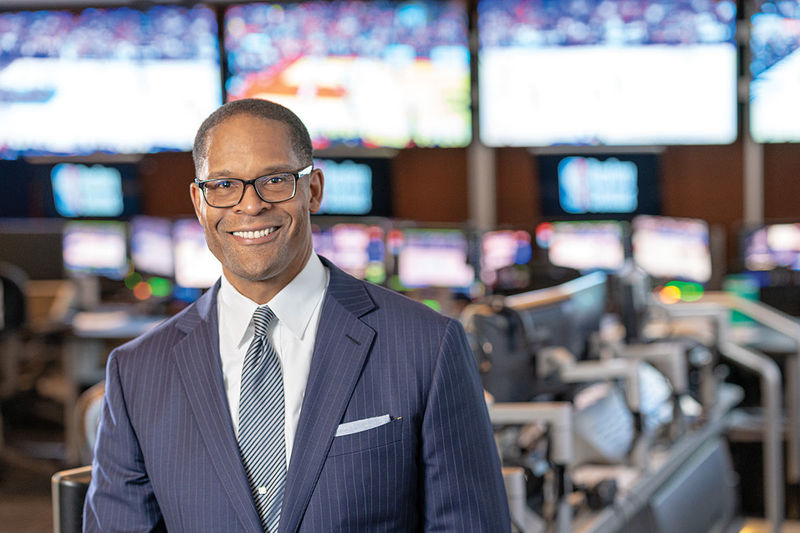 For Byron Spruell ’87, ’89MBA, championship rings from two teams he didn’t play for represent defining moments in his athletic and professional life.

The former Notre Dame offensive lineman and co-captain cherishes the 1988 championship ring Lou Holtz gave him, even though he last set foot on the field at Notre Dame Stadium in 1987. The ring was a thank you from Holtz for Spruell’s leadership, for helping lay the foundation that lifted the 1988 team to greatness.

“I don’t wear it, don’t display it,” Spruell says, “but it’s so cherished that I keep it literally in a safe at home.”

He doesn’t even own the second ring. Early in his tenure as the NBA’s president of league operations, he watched his boss, Commissioner Adam Silver, present rings to the 2015-16 NBA champion Cleveland Cavaliers, Spruell’s hometown team.

“It was surreal,” he says of that night in Cleveland in October 2016. “It validated to me this is about purpose, and this is the right place to be at the right time.”

Just how does someone go from the gridiron at Notre Dame to becoming a Swiss Army knife for the NBA, overseeing officiating, rules enforcement, fines and suspensions?

After completing his MBA, Spruell got his first job at a small firm called Peterson Consulting, which led to a position with Deloitte, where he spent about 20 years. He was the chief of staff for Deloitte’s CEO in the United States, Barry Salzberg, and became global managing director of its financial advisory services when Salzberg was named the multinational firm’s top officer.

“Coming into the consulting world, it was instant credibility — coming from Notre Dame with that background,” he says. “All I’ve tried to do is continue to leverage that.”

In 2016, he had dinner with a friend who was involved in the search for a new NBA president. Spruell discussed their conversation with his wife, Sedra ’87, ’89M.S. “She said, ‘Honey, that’s you. You love the game, you love sports. It’s a dream job for you,’” he says.

The job description wasn’t all that different from what Spruell had been doing — building consensus among large groups of people, implementing and overseeing policies and rules, working in international markets to help grow the business — and it turned out that the league was looking for someone from outside the sport to take on the job.

“Because of his experience at Deloitte,” Silver says, “he had done consulting in many different industries where his precise assignment was to come in with an outside perspective and see if there was a better way of doing something that had gone on for a long time.”

One of Spruell’s first days on the job included that ring ceremony in Cleveland. A more typical day involves getting into the NBA’s New York offices around 8 a.m. During the season, he is never really able to stop working. Sometimes he’ll watch games from the NBA’s Replay Center, where multiple screens display games from around the league. When he goes home, he is still monitoring things on the West Coast. 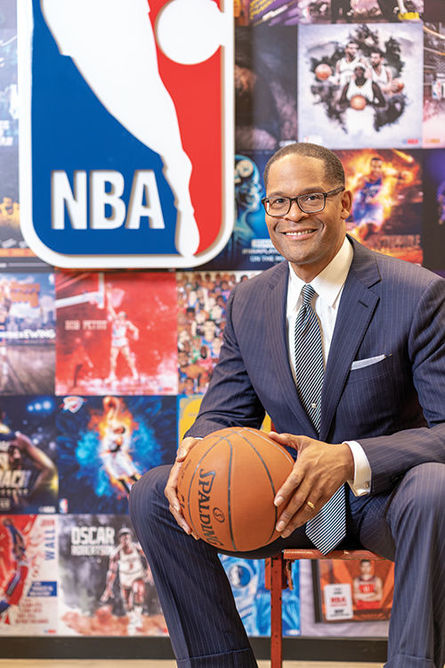 “Generally speaking, I’ll go home and have several screens set up, and I’ll be able to watch my phones as well, just in case any issue pops up.”

It’s Spruell’s job to ensure the league can respond to any rules or officiating issues — and it seems someone is always griping about the officials. The Houston Rockets audited the calls in their loss to the Golden State Warriors in Game 7 of the 2018 Western Conference Finals, compiling a report that argued the officiating “likely changed the eventual NBA champion.” And during the 2019 playoffs, he suspended Brooklyn Nets general manager Sean Marks for one game and fined him $25,000 for entering the referees’ locker room after a loss to the Philadelphia 76ers.

Beyond the heated topic of officiating, Spruell also has a voice in rules and format changes the league might make in the years ahead. Among the considerations: shorter games and seasons to reduce the physical toll that often causes teams to rest star players for the postseason, and the introduction of in-season tournaments to enhance fan interest. Any such changes, Silver says, would be several years down the road, but this spring Spruell made a presentation to the NBA Board of Governors outlining the possibilities.

His role requires principled conviction — and a thick skin when disagreements arise. Silver, whose sister Ann graduated from Notre Dame’s Law School in 1976, says Spruell’s integrity and relationship-building skills are among his strongest assets.

“From his experience on the field, I can see why he was the co-captain of his squad at Notre Dame. He has inherent leadership abilities,” Silver says. “He’s someone people intrinsically want to follow. Even when we’ve had disagreements in the office among senior management, no one has ever questioned his motivation, no one has ever felt he wasn’t putting his league hat on and putting the greater good of the league before his own interest. I think he’s got broad shoulders.”

In the NBA, 30 teams may have 30 different opinions about a rule change. Someone has to herd those divergent voices into a consensus. For Spruell, that ability comes naturally and distills into basic principles: Listen to your conscience and cultivate trust.

Chris Hine covers the NBA’s Minnesota Timberwolves for the Star-Tribune.