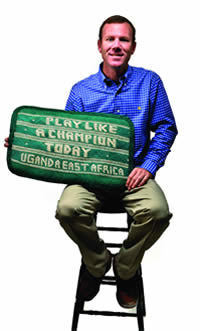 A lacrosse stick is a tool, one that Kevin Dugan ’01 uses to play the game he loves. It is a tool that helped Dugan realize his dream of becoming an athlete at Notre Dame. It’s a tool that drew him back to the game, first as a college coach and then as the director of lacrosse operations for his alma mater. He loves the combination of skill, speed and athleticism needed for success with a lacrosse stick.

But it wasn’t until Dugan saw Nakibira Fort holding a lacrosse stick that he realized how powerful a tool it could be.

Nakibira is a young girl from the village of Kkindu in southwest Uganda. Dugan visited the village in 2009 during the latest in a series of service trips that had taken him to such places as El Salvador, Guatemala and Ecuador to build libraries, work in schools and teach the game of lacrosse. At each stop, Dugan was overwhelmed by the poverty he saw. But he was also struck by the joy he found in people who had little to call their own.

“What I learned in El Salvador and all these Third World places was you can buy pleasure, but you can’t buy happiness,” Dugan says. “It was one of the most powerful lessons of my life.”

Dugan was struggling to figure out how to help when he met Nakibira. He had brought a sackful of lacrosse sticks with him, figuring he could run a few clinics. The game was foreign to be sure, but the kids were enthusiastic — especially Nakibira. “She was having the time of her life, laughing to the point she almost fell down,” Dugan says.

He asked one of her teachers about her. He learned that Nakibira was 8 years old, was one of seven children, that her father had AIDS and her mother was HIV-positive. Her parents could not afford a school uniform. “All of a sudden poverty had a name and it had a face and it had a story,” Dugan says. “I said, all right, this is where I’m going to dig in my heels.”

Dugan founded a nonprofit organization called Fields of Growth to tackle poverty in Uganda through the tight-knit U.S. college lacrosse community. Former players now working on Wall Street have offered financial support and business acumen that can be useful in attacking some of Uganda’s challenges. Athletes from different universities who want to give back can travel to the country to work on targeted service projects.

Jake Brems, a junior defenseman on Notre Dame’s team, spent part of last summer in the small East African nation. Brems taught and played lacrosse, but his main task was to help launch a poultry-rearing business that could give some families a sustainable income.

“You hear of all the disease and poverty, but they are some of the most spiritually rich people you will ever meet,” the science business major says. “They will teach you so much more than you can teach them.”

Such opportunities are rare for student athletes, whose team commitments leave little time for service or travel abroad. Dugan says he has been overwhelmed by the lacrosse community’s response, and he is hearing from players who want to do similar trips in other countries. “It’s almost come together a little bit too effortlessly,” he says. “That’s what the spirit of enthusiasm does.”

Kevin Corrigan, the head coach of the Notre Dame men’s team, says Dugan’s passion drives him to do things others would consider impossible. Corrigan asked Dugan last year about getting his players more involved with the rest of the student body. A delegation of Sudanese bishops had visited campus in October to talk about the fear of renewed violence as a treaty-mandated vote on splitting the country approached. Corrigan and Dugan agreed to stage a peace rally, but Dugan didn’t stop there. He got the men’s basketball team and other campus groups to join the lacrosse team’s effort. They organized a 3-on-3 basketball tournament to raise money for the cause. Dugan then led a trip east to visit Catholic Relief Services and talk about the Sudan situation with officials in Congress and the White House. Now he is working with the new government of Southern Sudan to develop an Olympic program.

Tom Hayes, another old friend and a longtime leader of the Federation of International Lacrosse, says Dugan’s vision sets him apart in college sports. “We have a way of having blinders on, just seeing the game that week,” the former Rutgers coach says. “Kevin has an ability to cast a much wider net in terms of what’s going on in the world.”

For Dugan, lacrosse and Notre Dame are an important part of that world. You can hear the wonder in his voice when he talks about walking on to the lacrosse team as a midfielder, looking over a teammate’s shoulder during practice and seeing the Golden Dome.

After the team’s season ended May 22 in a 7-5 loss to Duke in the NCAA tournament quarterfinals, Dugan became the director of youth and community outreach in the athletic department as part of a new initiative to fuse what he calls the “ethos of the University” into Notre Dame sports. In addition to his work in Africa, he is now charged with opening the doors of Irish athletics to children who live nearby. He says Jack Swarbrick ’76, ND athletic director, wants “to see as many young kids as possible impacted with the ideals of Notre Dame.”

But Dugan does not need to be convinced that sports can change lives for the better, even in a faraway place like Uganda where a lacrosse stick is a strange and wonderful object that somehow manages to bring disparate cultures together.

“You can share the game you love and do great things at the same time,” he says. “That’s the key that’s opened the door to homes . . . and classrooms being built and poultry-rearing projects being started. None of that has anything to do with lacrosse, but the key to it all has been capitalizing on the spirit and enthusiasm of the lacrosse community.”

Bill Krueger is a freelance writer based in Raleigh, North Carolina.