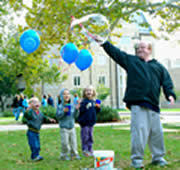 Jim Paladino ’74 can often hear his son Chris stirring around in his room before anyone else is up in the morning.

“Then he will come in and hand me a note while I am still in bed,” says Paladino, an associate director of Notre Dame’s Center for Social Concerns. “It may say, ‘Dad, I love you,’ one day and ‘Dr. Paladino, I love you,’ the next.”

Jim gets the message. So do dozens of others on campus. Known as the mayor of Notre Dame, Chris writes out his love notes throughout the day while working as a Center for Social Concerns office assistant for a few hours in the morning and then later at his little snack shop in the Transportation Services building.

“I could wallpaper my living room with all the notes Chris has given me,” says Patty Flynn, the center’s senior staff assistant and receptionist. “And some come just in the nick of time, reminding me that all is well.”

Chris Paladino, 29, is the oldest of the six children Jim and Mary Jo Paladino ’01M.S. have adopted. “He was born with a bunch of health issues, and the doctors and nurses told us he that he wasn’t going to walk or talk,” Jim says. “They said we should consider institutionalizing him.”

That isn’t the Paladinos’ way. “We decided to immerse him in every aspect of life,” says Jim. “He has blossomed, and we have seen others around him blossom, too.”

Chris has forged several close relationships with students who volunteered at the social concerns center and who still keep in contact with him. Chris makes a tradition of giving out little gifts to the graduating seniors and saves all the postcards they send him.

He is especially known for his hugs, even though he resisted touch and demonstrated some autistic-like behavior as a child. “He used to arch his back when we would pick him up,” Jim says. “But at some point he relaxed.”

These days Chris helps keep everyone around him relaxed, refreshed and refocused on the positive side of life — whether it’s one of the maintenance staff, a student or the University’s president, Rev. John I. Jenkins, CSC.

“When I see Father Jenkins or Monk [the Rev. Edward A. Malloy], they ask me how Chris is,” Jim says. “They barely know who I am, but they certainly know Chris.”

He is the mayor of Notre Dame, after all, and he has the business cards to prove it. “I like being mayor,” Chris says with a shy smile. “It’s a good job.”

Bill Purcell, another associate director at the center, came up with that tag. “I was talking about what a great ambassador Chris is for the university,” Purcell recalls. “And I said, ‘You’re the mayor around here.’ [Transportation Services manager] Marty Ogren loved that title and called Father Jenkins to make sure is was okay if we called him that.”

Ogren playfully campaigned against Chris during one of the tailgate parties he hosts at the transportation building on Saint Joseph’s Drive before football games. Ballots were cast and Ogren was annihilated, 137-3. “So Chris was a little upset that there were three people who didn’t vote for him,” Ogren says.

There were no hard feelings for Ogren after his crushing defeat. He and his staff can’t get enough of Chris. After he finishes his work at the center, a transportation worker will drive over and pick up Chris about 10 a.m. He then is with them through lunchtime and into the afternoon.

“He’s changed the dynamics at our place,” Ogren says. “He brings people together by the cheerful way he approaches life and the way he shows his love. What a sweetheart he is.”

One of Chris’s past duties for the Center for Social Concerns was to cycle over to Ogren’s office on his three-wheel bike and get keys for the vans that the student volunteers would drive to assignments. “I saw him come in one day and asked who he was,” Ogren says. “On about the third day I saw him, I called out to him but got no response. On the fifth day we were celebrating someone’s birthday, and I asked him if he wanted a piece of cake.

“The rest is history.”

Chris, who went to nearby Clay High School, calls his little store “Chris’s 8-to-12” because that makes it better than 7-11. He sells the candy that Marty and Pam Ogren provide for just 25 cents, and so plenty of campus people stop in — both for the price and for one of Chris’s hugs.

The catch is that he doesn’t give any change. His little sign says so, if anyone bothers to notice. “One time, Father [Timothy] Scully was getting ready to hand Chris a $10 bill, and so I thought I better say, ‘Father, you might want to read the sign,’” Ogren says with a laugh.

No change. No preferential treatment.

“Everybody is the same in Chris’s eyes,” his dad says.

That has produced a few nervous moments. “Most people with the University pump their own gas here,” Ogren says. Then came the day Father Malloy, dressed in a black suit, drove up, and an assistant jumped out to fill the tank. “Chris sauntered out . . . took a look and said to Monk, ‘You need to pump your own gas.’”

Monk couldn’t help but smile. On Chris’s next birthday, Monk sent him a card. Ironically, Chris uses a desk at the transportation office that once belonged to the former University president.

“Chris keeps us all grounded,” says Rev. William M. Lies, CSC, ’93M.Div., executive director of the Center for Social Concerns. “He is one of the most loving people you will find. He is all smiles.”

During one Halloween, Chris dressed up as a priest. “And because we have the same amount of hair — hardly any — he looked like my mini-me,” Father Lies says. “Father Jenkins saw him and said, ‘Uh, oh, it looks like you’re bucking for more than just mayor around here.’”

In 2004, Chris received the Notre Dame Spirit Award for his positive influence on people around campus. He hugged everyone in sight. During a Notre Dame football time out, while the center’s staff was being honored for the center’s 25 years on campus, he even was ready to give a hug to his friend, Evan Sharpley, while the Irish quarterback was consulting with coach Charlie Weis.

That might have be the only time that a Chris Paladino hug had to be waved off.

Next to Paladino family members, Pam and Marty Ogren may be the recipients of the most hugs. Chris will sometimes go home with Marty and have dinner at their home.

“On one evening, we drove Chris up to Buchanan to see a house with 200,000 Christmas lights,” Marty says. “We all oohed and aahed. Then on our way home, there was a home with a single candle in the window. ‘Look at that! Look at that!’ Chris shouted. He was just as excited about that one candle as he was all those other lights.

“That’s Chris. He sees something wonderful in everything and helps us do the same.”

Bill Moor is a former sports editor and human-interest columnist of the South Bend Tribune.

Photo of Chris Paladino at the Center for Social Concerns 25th anniversary celebration in 2008 by Matt Cashore.