Sometimes Joe Fennessy ’18 forgets about the beard. He’ll be deep in conversation — not uncommon for the outgoing Notre Dame junior — and put a hand to his chin. That’s when he’ll feel it.

“I try to keep the chinstrap trimmed, but it’s a bizarre piece of facial hair,” says Fennessy. “I’ve gotten so used to it, though sometimes I get looks about why I have such an odd-looking beard.” 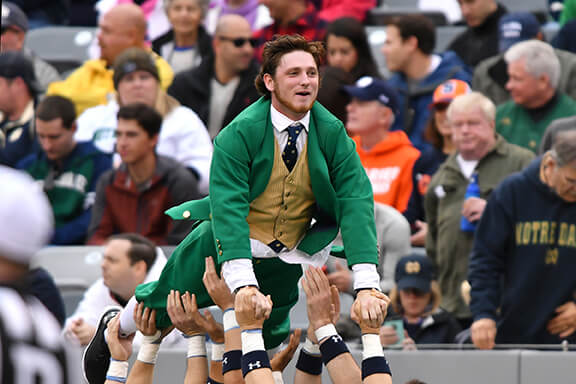 The reason is simple: Fennessy is the Leprechaun; the mythical, shillelagh-toting symbol of Notre Dame school spirit. On a part-time basis, at least. When he’s not leading the Irish football team onto the field, he is a marketing and English major who takes his studies as seriously as he takes his roles as cheerleader-in-chief and a campus public figure.

At Notre Dame, the New Englander says he is rarely alone. He’s often seen with a pack of friends hanging out or studying at LaFortune, no doubt lamenting the fact that his beloved iced coffee comes from a Starbucks, rather than his hometown-favorite Dunkin’ Donuts.

Outside of his work as the Leprechaun, he says he’s “just regular Joe.” But when it comes to rallying the fan base, there’s never been anything regular about Joe Fennessy.

At the end of his freshman year, Fennessy tried out to be the Leprechaun, earning a spot as the “third-string” greed-clad sprite. He spent his sophomore year cheering on the Notre Dame soccer, hockey and lacrosse teams as Green Squad Leprechaun and in the spring of 2016, he again endured the lengthy tryouts, leapfrogging to the top spot — his pot of gold a promotion to Gold Squad Leprechaun, responsible for football and men’s basketball.

The Leprechaun tryout process requires physical and mental fitness for those wishing to don the trademark green jacket, knickers and top hat. Fennessy’s audition required him to lead a mock pep rally, coordinate a dance-off, and be interviewed by a local television news reporter. The contenders also were asked to pen essays on why they would make successful leprechauns, submit to formal panel interviews and compete in a pushup contest.

“You really have to be on your toes,” Fennessy says. “They want a lunatic who people want to watch and join. I toe the line a bit, but stay on the side where people want to join the fun.”

Being the Leprechaun means leading the football team onto the field in front of 80,000 fans, working with the cheerleading squad and leading Notre Dame Stadium in raucous chants. The sheer number of eyes upon him is not daunting, Fennessy says. The greater the stakes, the more enthused he becomes. When the Irish score a touchdown, he runs around like the most deliriously happy of fans, expressing the euphoria of the crowd. When the team is down on its luck, Fennessy’s Leprechaun is angry and animated, more determined than ever to get the fans behind the team.

“Joe is particularly effective in his role for a number of reasons,” says cheerleading Coach Delayna Herndon, who cites “his natural charisma and energy and his ability to engage any crowd, think on his toes and make connections with those he encounters.”

A native of North Andover, Mass., Fennessy comes from what he describes as a “lively and emotional family. There is never a quiet moment,” he says, of life with his parents and two younger sisters. “Even our sassy dog has taken on the personality of the family.” The Fennessys traveled to South Bend for the Duke game on September 24, proudly snapping photos with their Leprechaun spawn after the game.

Like many northeasterners, Fennessy grew up a passionate Boston sports fanatic, living and dying on the fortunes of the Red Sox and Patriots. He was a high school athlete, playing midfield for the varsity soccer team, second base for the varsity baseball team, and skating with the club hockey program at St. Paul’s School in Concord, N.H. He also founded the Superfans, a student group that doled out face paint, made posters and congregated en masse on behalf of the boarding school’s teams. “I love all sports, which I got from my dad, who is a huge sports guy,” he says.

Much as Fennessy has expanded his network of friends beyond the Boston area, the Leprechaun’s connections extend beyond game days to public appearances around campus and greater South Bend, including outreach at local hospitals. He cherishes his role as positive-energy-maker, complying with hundreds of photo requests each game day.

“It is fun to have an alter ego,” he says. “To a certain extent, I am performing, but as the Leprechaun I am also being my own version of a rowdy fan.”

He travels with the cheerleading squad to road football games, leading cadres of alumni in pre-game pep rallies and bringing a little of that Irish magic to those disparate corners of the country. Those who encounter him minus his green suit and shillelagh often do double-takes at his auburn chinstrap — and he is always pleased with the mirth that comes when strangers tease out his secret identity. “It’s neat how much I can impact people,” he says.

Not all opposing fans are friendly to the Leprechaun, Fennessy has learned. He has been heckled by students. One Michigan State fan picked him up — his 5’8”, 148-pound frame and all — and carried him around. And he’s been left hanging on high-fives by children cheering for Notre Dame’s opponents.

“Sometimes the kids will say I am not a real leprechaun, which is really hurtful,” he says.

But Fennessy finds that most fans love the Leprechaun. He is the regular recipient of pecks on the cheek from women of the senior citizen demographic, and is a welcome addition at any pre-game tailgate.

Outside of his Leprechaun duties, Fennessy serves as a brand ambassador for a small clothing line, while he and some friends are budding entrepreneurs in the initial stages of starting their own T-shirt business. Whenever his associates see him dressed in his Leprechaun gear, they play it up.

“When he walks by us at tailgates, he gives us a little sign to show he knows we are there,” says Toronto native Matt Bodig ’18, one of Joe’s roommates. “But Joe gets really absorbed into the role. We see him walking around, all smiles, and he really gets the crowd going; it’s nuts.”

In the spring, Fennessy will have to defend his status as head Leprechaun, submitting once again to the tryout process. But he says he wouldn’t have it any other way

“In the end, school spirit is just a pure form of love,” he says. “People identify with Notre Dame, and every student or alum sees him or herself as a potential ambassador. Being the Leprechaun allows me to give back to fellow students and the University. I can’t imagine life at Notre Dame without this experience.”

Jana Brown is a freelance writer and editor based in Concord, N.H. She is the screenwriter of The Divide, a feature film currently in post-production.