Why is there so much unrest in the Middle East? For some, the answer may seem obvious: religious tension — that Islamists will be Islamists, so to speak. Edward de Bono, who coined the term “lateral thinking,” has suggested the region’s lack of zinc as a nutritional explanation, while others point to the region’s abundance of oil. Then there are the unintended consequences of America’s 15-year-old war on terror. 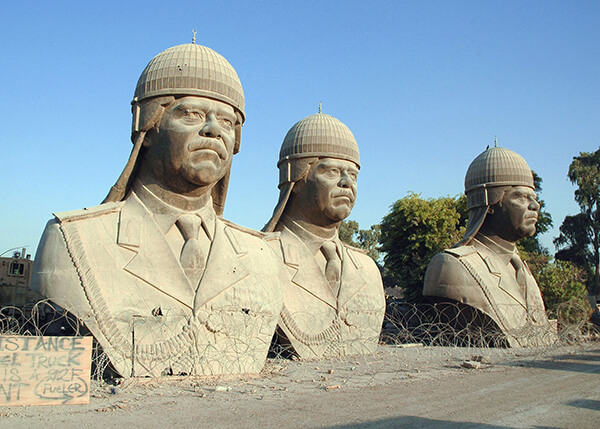 Hibbard has worked as a legislative aide on Capitol Hill and as a program director for the United States Institute for Peace. He has had several working spells in Egypt, has been a DePaul University professor since 2005 and is spending this spring at Notre Dame as a visiting research fellow at the Kroc Institute for International Peace Studies. Understandably, room C103 in the Hesburgh Center was full for his lecture, “Political Islam and America’s Long War.”

“The U.S. has, particularly since 9/11, tended to view the challenge of Islamic militancy in a very narrow, militaristic frame — military problem, military solution,” he said, “and in doing so it has overlooked or ignored the larger strategic context in which many of these groups operate. And, perhaps more to the point, it has neglected to deal with the underlying issues, which have historically given rise to extremism in general and Islamic militancy in particular.”

To a large extent, according to Hibbard, those underlying issues are socioeconomic, and he suggests that the United States and the western coalitions that have waged war in the Middle East for years may be partly to blame. He recalled a conversation he had had in the 2000s with a former Egyptian ambassador to the United Nations, who told him, “You know, if America created a Middle East Marshall Fund and put $100 billion into the region it would just transform this place, and people would love you.”

That kind of money might sound extreme, and it can be argued that the U.S. should not be handing out such aid in an unstable Middle East. Just such an argument was made in opposition to Gen. George Marshall’s plan to rebuild Europe after World War II. Whatever the arguments pro or con, skeptics might compare that kind of potential investment with the $1.983 trillion that, according to the Defense Department and the Office of Management and Budget the federal government has spent to date in the fight against terrorism.

From listening to Hibbard, the U.S. didn’t get much bang for those bucks. The war has “killed a huge amount of people, and if part of your goal is winning hearts and minds, this is not the way one does it,” he said. “More to the point, it also . . . had the unintended consequence of providing an environment in which Islamist groups could return,” he said.

This is all bad for peace in the Middle East, and one apparently disillusioned audience member asked the regional specialist whether anything can ever solve the Middle East’s problems. “Incremental reform,” Hibbard responded. But he also pointed out that locally the military approach did actually work fairly well in the 1990s.

“The Islamiyya and Islamic Jihad were defeated in Egypt; an Islamic group in Algeria was defeated there,” he said. “Saudi Arabia was able to get a lid on its military problems. By the end of the 1990s, military Islamists were largely in retreat. There’s even a moment in 1997 when members of the Islamiyya, which was one of the larger military groups in Egypt, wrote a series of books, basically saying, ‘We were wrong. Violence was wrong. We misunderstood our mission.’ And there was a conscious effort to distance themselves from the militants. They realized that the military attacks on both civil society and the state had actually been counterproductive and had actually lost them public support,” he said.

Why then, did the terrorism problem become so bad that 9/11 happened only a few years later?

“That side of the equation worked well, but the promised reforms never came. There was very little political liberalization. There were elections, but they were, most of the time, more or less rigged.”

Rhetoric and approach both shifted at the end of 2001. “The Bush administration embraced the narrative that they hate us for our values,” Hibbard said. “The utility of [that narrative] from a propaganda perspective was huge, because you’re now situating the war on terror within a larger historical narrative of the U.S. opposing the Nazis, the U.S. opposing the Soviet Union, and now the U.S. . . . opposing the Islamist fascism.”

Eight years of war and diplomacy under President Obama didn’t significantly change the Middle East for the better. Hope for a peaceful, democratic future in the region rose during the so-called Arab Spring of 2010, but in the end the unrest created more power vacuums. “This provided a safe haven for militant groups to operate in,” Hibbard continued. And this trend, these collapsing state structures and the ability for militant groups to actually embed themselves in the community and actually gain control of territories, that’s fostering what the literature refers to as proto-states, the most notable one being ISIS.”

There is no overnight solution to all of these problems, and it is not yet clear what steps President Trump will take. But “if there’s a ray of hope — I can’t believe I’m even saying this,” Hibbard said, “it’s that the military has learned a lot during the last 15 years.”