It took ten years of planning, nail-biting and hopeful angst at Notre Dame; three-and-a-half years of designing, pipe casting and precision carpentry at the Paul Fritts workshop in Tacoma, Washington; and a cross-country journey of some 2,100 miles spanning three time zones and the Continental Divide. Now, at last, the Murdy Family Organ has reached its permanent home inside the Basilica of the Sacred Heart.

When it arrived on the morning of Sunday, July 31, snugly packed inside a pair of tractor-trailers that rolled alongside Saint Mary’s Lake under blue skies, three dozen enthusiastic volunteer movers were there to welcome it with open arms. 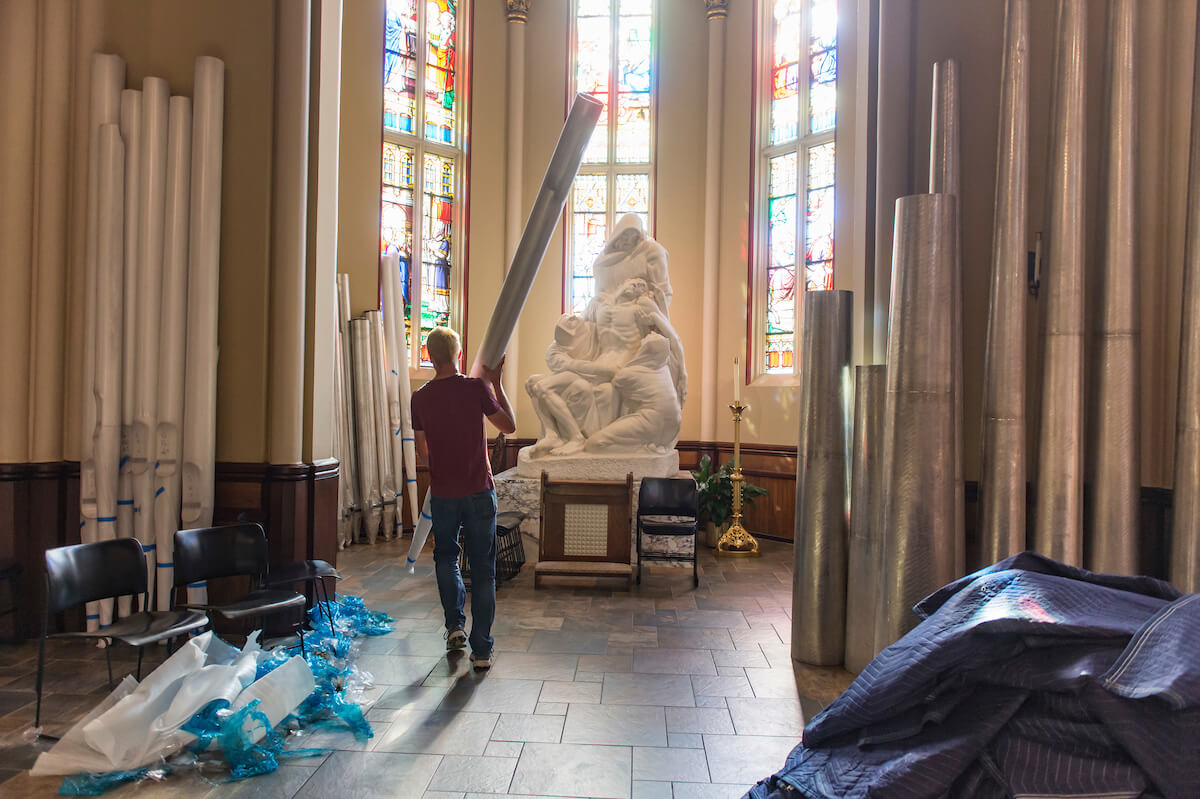 Minutes after the conclusion of the 10 o’clock Mass, master organ builder Paul Fritts and three of his craftsmen parked their rental car in the lot next to the Grotto, climbed the stairs past Carole Sandner Hall and walked into the empty church to begin their two-week occupation of pipe organ assembly.

Sunlight streamed through the stained glass windows and onto the empty pews, the six rows of which nearest the organ loft had been removed to make room for scaffolding and the largest of the organ’s umpteen thousand parts. Up in the loft, the gleaming metal of a new interior ventilation system, designed to protect the 40-foot instrument from stratifications of humidity and air temperature, shone brightly against a back wall recently painted a deep shade of blue to match the church’s gold-starred, night-sky ceiling and to offset the assembled organ’s white case.

The first of the two trucks that had spent the night in the D6 student parking lot near the Rock backed up the hill past Corby Hall at 11:45. That last 100 yards of the adventure took nearly 15 minutes.

At 11:58, the back doors of the long-hauler swung open and a cluster of heavy moving-van straps ribboned to the ground, revealing two tiers packed floor to ceiling along the entire 48-foot length of the truck.

The spectacle that followed drew onlookers from across the Main Quad throughout the afternoon. Jokes about inviting the football team for an unorthodox strength workout aside, the amateur movers included basilica organists, students in the Sacred Music program and members of their extended families, as well as campus ministry staff, a few local alumni and a Holy Cross seminarian from Ireland — men and women in their 70s down to children as young as 12. Some of these recruits had traveled for hours to support the cause and to touch and carry a few extraordinary pieces of Notre Dame history.

Andrew McShane ’93M.M., Campus Ministry’s associate director of music and choirs who has worked for 10 years to bring a world-class instrument into Notre Dame’s iconic house of worship, introduced Fritts to the group. Barely audible over the noise to those standing at the outer fringes of the circle, the softspoken artisan thanked the group for coming, then conveyed the superhuman trust he was about to place in them as the final carriers of the unique musical instrument he had designed himself.

“We are all experienced organ-part handlers,” he said, indicating his workshop colleagues Joseph Green, Raphi Giangiulio and Zane Boothby and the four professional riggers from Organ Clearing House in Charlestown, Massachusetts, whom he had hired to lead the move and build the scaffolding. “And,” he added to appreciative laughter, “you aren’t.”

That meant “padding” your hands as you carried the pipes — especially the façade pipes — he explained, cradling them the way you might carry a blanket full of eggs and not putting too much pressure on any one part of the metal. As for where to put everything? “We’re going to have to figure things out as we go.”

There is no tidy way to unload a 15-ton, 5,164-pipe mechanical action organ into a church of any size, much less one with a loft accessible only by a pair of narrow spiral staircases. Over the next six hours, as the workforce dwindled, the organ passed piecemeal through the basilica’s great wooden doors. Fritts greeted each wave of volunteer movers, steering every placement toward some kind of order as items piled up in the pews and along the aisles, filling the nave and the transepts and eventually flowing around and past the altar.

Giant pieces of beautifully painted complex carpentry looking like chunks of a Greek temple – the impost and cornices of the case that will house the organ’s five pipe divisions, some weighing many hundreds of pounds — found their way onto the tops of pews and the few clear spots on the floor. After the riggers managed one arm-breakingly heavy segment of oak and poplar without causing so much as a flake or a scratch, a grinning Fritts remarked, “These guys are pros.”

Organ Clearing House works several organ installations each year in places as faraway and unexpected as Cambodia. The largest job the crew could remember, the restored Great Organ of the Cathedral of St. John the Divine in New York City, required seven fully loaded tractor-trailers to transport it. That was extreme, rigger Dean Crory noted. Measured by the size of the jobs they do, the Murdy, he said, is “about average.”

Work began slowly. Around 2 p.m., the four riggers teamed up to carry one of the 32-foot pipes, among the largest in the instrument. They slid it gently off the shelf and, teeth gritted, disappeared inside the church doors.

Then, as if a cork had popped, volunteers received a steady stream of smaller pieces, much of it mysterious in shape and function: toeboards, reed pipe boots, trackers and stop-action rods, swell-box shutters, interior walkboards, gilded pieces of decorative screening.

Easily recognized organ parts elicited cries of delight. “Pedals!” exclaimed campus minister Brett Perkins ’01, ’11M.A., rushing forward with his arms outstretched. “The pedal board!” Moving swiftly around the church, Fritts organized it all as space allowed, leaving volunteers to wonder where work the next morning would start.

At 3:30 the remaining volunteers let out a weary cheer as the last drawer of pipes came off the end of the first truck. The doors of the second van were already open, promising more of the same, but at 6:08 p.m. a pair of volunteers, sweaty, exhausted and happy, set down the last box on the floor near the Lady Chapel.

For the three men at the heart of the project, the overriding emotion was relief.

“I no longer feel like throwing up,” said a smiling Rudy Reyes ’03MTS, ’07M.A., the Notre Dame development officer who has shepherded the project ever since the day seven summers ago when basilica organist Gail Walton approached him to say, “Have I got a project for you.”

“This morning I felt like throwing up,” he repeated. “Now I’m going to cry.”

McShane, the late Walton’s former student and successor as organist and director of the Liturgical Choir, said simply, “I’m overwhelmed.”

“Well, my back hurts,” Fritts said, acknowledging without shame that he’d spent most of the day telling people what to do. Above all, he was humbled and grateful. “It’s a really big deal to have this much help,” he said.

It was time for dinner and a good night’s sleep. Monday morning would start early. The riggers expected to begin building the scaffold at 7 a.m., 30 boxes of framing and boards that had yet to be unpacked. Fritts figured his team would show up a little later to organize their one-of-a-kind puzzle of 10,000-plus un-easy pieces into some kind of workable order, the only instructional manual being the one in his head.

Imagine keeping track of it all.

Surveying the basilica-turned-organ-warehouse from the altar, a hint of alarm colored Paul Fritts’ face for the first time all afternoon. He’d misplaced his car key.

It could have been anywhere amidst the chaos, but it turned up within minutes — the only item left behind in the emptiest part of the church. The organ loft.

John Nagy is an associate editor of this magazine, which is following the genesis of the Murdy Family Organ at The Basilica Organ Project. Coming soon: Watch a time-lapse of the construction as it all comes together.