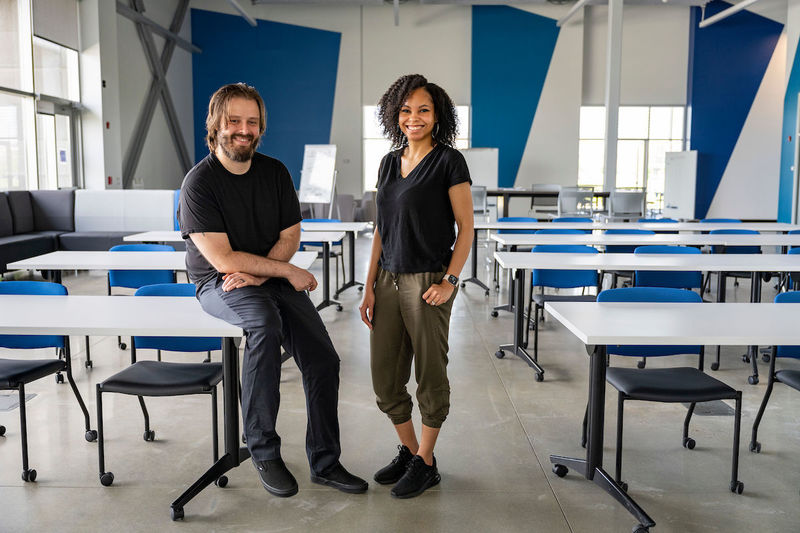 “Were not big on rules,” they say. Alex and Alex Sejdinaj, husband and wife tech entrepreneurs, are actually talking about love — not some Silicon Valley shibboleth.

Their story starts in 2015, when Alexandra Sejdinaj was Alex Liggins. As the rites of senior spring commenced at Notre Dame and her classmates’ job offers began to appear, she was keeping her head down. The English and pre-med major had given up on the idea of a medical career, but not on the idea of helping people.

She had started tutoring at local high schools. Instead of obsessing about her job problem, she was immersing herself in her students’. She recognized that for many reasons — personal, financial, academic — many had no plans to attend college. What would they do to earn a living? Liggins wanted to help them find careers that offered good pay and the chance to make real contributions to their communities.

A little research suggested “coding” might be the answer. At the time, computer programming as a profession was beginning to show signs of stagnation, but the concepts and programming languages and creative problem-solving skills were increasingly in demand across professions ranging from information technology and business analytics to graphic design, science and engineering. Soon Fast Company, the business and technology magazine, would affirm coding as “the most important job skill of the future,” reporting that it could boost earning potential by as much as $22,000 on average. By learning to code, Liggins reasoned, her students could secure well-paying, meaningful work, even without a college degree.

So she taught herself some coding basics and began developing a pilot program through Notre Dame’s Robinson Community Learning Center. There she met two Notre Dame IT specialists, Alex Sejdinaj and Chris Frederick, who had a similar idea aimed at adult learners. The three teamed up, and just after Liggins collected her diploma, she spent five weeks in South Bend helping to roll out the first iteration of their course — teaching coding to local students for free.

They soon discovered a few obstacles. It wasn’t just that their students hadn’t coded before, or that many had grown up without consistent access to computers. The real challenge, they saw, was representation. Some students thought they weren’t “computer people” or saw code as forbidding and foreign. Female and minority students felt especially out of place in the largely white, male field of coding.

The partners realized they needed to make coding speak to their students. They started by personalizing it, by showing students how to make their names appear on screen using HTML. Many were hooked. By the end of the first session, their 19 students had created 23 websites, four of which were civic applications designed to promote nonviolence in South Bend.

The deeper lesson was clear: Tech can be empowering. And to top it off, at summer’s end, the instructors arranged for their students to present their work to then-Mayor Pete Buttigieg and to Google engineers in Chicago.

South Bend Code School was born. Today, in addition to its headquarters inside Ignition Park, a growing technology park on the site of the former Studebaker automobile plant, the school has locations in Elkhart, Fort Wayne and Bloomington, Indiana, with a new site in Port Huron, Michigan, set to open soon. All told, it reaches some 400 students in a given week. And even as operations expand, it continues to prioritize diversity: Classes are typically more than 40 percent women and more than 50 percent minorities.

One alumna, Camisa Vines, now a computer science student at Indiana University in Bloomington, illustrates the possibilities. Vines became an instructor of younger coding students as a Code School intern during her senior year at John Adams High School. Her work earned her recognition as Indiana’s 2018 High School Intern of the Year. “She creates her own challenges for herself,” Liggins told Grotto Network. “Seeing that independence kind of flourish in her, that in particular is just really, really cool to see.”

“If a student feels stuck, coding can be the tool to go beyond what they imagined.”

Liggins has started two additional tech businesses with her Code School co-founders and earned a national Women of Color STEM Award. When she reflects on her path toward helping others, she calls it a “mashup,” a fusion of unlike things — teaching code to children ages 7 to 18 who don’t “look the part,” launching tech startups in the heart of the Rust Belt and achieving business success by grounding entrepreneurship in service to the community. That’s the kind of rule breaking she and her husband are talking about.

The Sejdinajs have another favorite expression: “Do the right thing and the right things will happen.” When Alex ’15 and Alex decided to risk mixing business and romance by getting married in 2018, it was just the next mashup in a line of many others. It seems like it shouldn’t work, but there’s something undeniably right about it.