One day about halfway through his work as the main carpenter on the Notre Dame organ, Andreas Schonger wiped out while training for a mountain bike race and broke his collarbone. The accident was bad enough that firefighters had to carry him out of the forest.

Soon after the surgery to mend his cracked clavicle, Schonger was back on his feet in pursuit of two other favorite but verboten pastimes: jogging and remodeling his home. He got a stern lecture from his doctor about that, but otherwise the news after his post-surgery X-rays was good. Thanks to the metal plate screwed into his shoulder, the injury was healing. 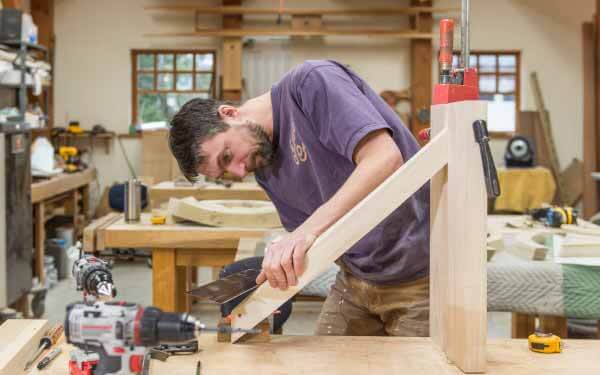 Back at work that summer of 2015 at Paul Fritts & Company Organ Builders, Schonger behaved himself more appropriately to his attenuated physical condition. He’d consult each day as needed with the new carpenter and the summer apprentice about cut lists and techniques and then return his attention to gilding the pipe shades that were arriving from the carver in Germany — quiet work that Schonger would have had to tackle sooner or later. So he spent hours each day in Fritts’ second-floor office sanding, priming and painting. Each carving received a coat of bright red oil-based enamel paint that would help the evanescent squares of 23-karat gold adhere to the wood and gleam more vividly — especially from a distance. Then he applied the sheets themselves with special brushes, his fingertips and cotton.

When you added up the time required by each step, a single shade could take more than a day from start to finish. The basilica’s organ has dozens of them, creating a façade that Fritts says is inspired in part by the design that master builder Arp Schnitger used in 1719 for his last organ inside the Sint-Michaëlkerk in Zwolle, Netherlands.

It may be that same balance of adventurous spirit and patience through adversity that brought Schonger to the United States in the first place. Growing up near the small Bavarian river town of Dillingen an der Donau, Schonger learned early how to work with his hands. He learned to play the piano “a little bit,” but didn’t really stick with it. Instead, it was carpentry that led him after high school to an apprenticeship at Sandtner Orgelbau, an organ-building shop in town — and to study at Germany’s only trade school for the craft.

“I learned that it’s quite a diverse job, working with wood and felt and leather. And you get to travel and see different places,” he says.

All of that appealed to him, but the next step would have to wait. Ready for his career by his early 20s, the conscientious objector took a year off for the service that German law required at that time, choosing to drive an ambulance over joining the military.

By then the teachers’ son had decided it was time to see the world. Schonger learned about an Austrian-born organ builder in Tacoma, Washington, named Martin Pasi, another craftsman whose work is inspired by the trade’s oldest traditions. Pasi didn’t have a place for him, but he referred the young man to his former employer up the road, Paul Fritts, who did. Schonger obtained a practical trainee visa and went to work, expecting to stay for a journeyman year. Maybe 18 months.

It turned into 16 years and counting. About a year into a job he was learning to love, he started dating. Meanwhile he was getting acquainted first-hand with the expenses and frustrations of U.S. immigration law, and his patience came in handy once more. “Unfortunately, there is basically no way to ‘do it the right way,’” he says, “since the only avenues for immigration are either the lottery, which makes up to 50,000 immigrant visas available annually, or through marriage.”

Fortunately for Schonger in more ways than one, his relationship with Brooke McInturff would prove to be lasting. They married in 2003 and their children, Lukas and Franka, are now workshop regulars. They like to visit with Paul Fritts and, believe it or not, “they really like sweeping the floors” in the woodshop. The dog house, bird house and skateboard they’ve made there with their father may be the least of the products to emerge from a Fritts workbench, but only in the sense that very few people know about them.

“My wife always wants me to build something,” the carpenter jokes. “It’s the downside.”

The 39-year-old Schonger’s days as a competitive mountain biker may be behind him, but his best work making organ cases, wind chests, pipe racks, bellows, benches, pedal boards, wooden pipes and “whatever else needs to be made” surely lies ahead. He likes the challenge of the variety and the time to contemplate it all.

“I like that it’s meditative, working with wood,” he says. “Being able to move your body around. I can’t sit still for too long. That’s what I enjoy about it. We’ll see how it goes when I get older. Maybe I’ll sit down more. Maybe I’ll change my mind.”