Last in a series of portraits of the people behind the making of the new instrument in the Basilica of the Sacred Heart.

Before moving into his rental house in Seattle last year, Ben Wooley felt he needed to give his future housemates a warning. “Just so you know,” he told them, “I have a lot of instruments, and not all of them are going to fit in my room.”

He wasn’t kidding. Taking a mental tour through the home, Wooley, 23, counts a drum set, a Wurlitzer electric piano and a Fender Rhodes to match, a Hammond RT3 that is “90 to 95 percent functioning the way it should.” He’s tinkering with that one, “Frankensteining” parts for the speaker to get it to where it needs to be. 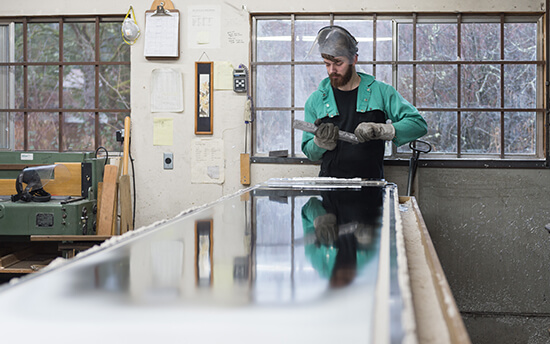 Then there’s an acoustic guitar. A clarinet. Flute. Trumpet. A couple of harmonicas. A ukulele. “I’ve got a recorder. And then I have two Chinese folk instruments. One’s an end-blown flute and one’s a kind of resonator-recorder type thing.”

He pleads with his friends to play them — the keyboards in particular — so he doesn’t feel bad taking up the space.

Wooley’s life in music began early. His mother jokes that before he was born, she knew she’d be raising either a gymnast or a percussionist. He started on piano at age 5 and by middle school was taking the “jazz route,” playing percussion in his high school band. In old blues records he found his “passion for musical instruments as the kind of machines that they are”: The different sounds you’d get out of this or that, and what you could do if you fooled around with them for a little while.

By 2015, when he’d graduated from the University of Illinois with a degree in materials science and engineering, Wooley figures that he’d spent more time in collegiate music ensembles, the marching band, the Fighting Illini basketball pep band and side projects like the eight-man, New Orleans-style Sixth Street Brass Band than he had in the laboratories and lecture halls.

So it should have surprised no one but the college administrator conducting Wooley’s exit interview that while his classmates were heading off to good jobs in materials testing, failure analysis, product development and consulting, Wooley was bound for a workshop in Washington state, where within weeks he’d be picking up a knife to burnish façade pipes for “the Notre Dame organ” to a sweet, gentle luster.

What that administrator missed was this: Soon after he’d decided he wasn’t destined for a desk or a lab bench, Wooley wandered off campus and hit the streets in Champaign, looking for career options. One semester he took advantage of a light course load and volunteered at a music shop called Analog Outfitters. “They did a lot of stuff with Hammond organs,” he says, referring to the instrument that infused 1960s and ’70s-era blues-rock from Booker T. and the M.G.’s to the Spencer Davis Group and Led Zeppelin. “They built really killer amps out of smaller or broken-down old Hammonds.”

The owner gave Wooley a pile of spare parts to a Hammond B3, an old manual and maybe the best lesson he learned in four years at school: “If you get stuck and you need help, by all means come ask me. But there’s a lot of stuff online, and if you shovel through it and figure out how to do it on your own, you’re going to learn so much more about how these things work and how they go together than if I just told you how.”

Like any good jazz musician, Wooley’s made a habit of putting himself in learn-by-doing situations, like the percussion section of Sound Wave, the official band of the Seattle Sounders soccer team, and the pipe shop inside Paul Fritts & Company Organ Builders. “Greg [Bahnsen] and Erik [McLeod] and Paul are as good at teaching as they are at building organs,” he says of his mentors in the pipe shop and the director of the firm.

The work itself often does the rest. Once the shop finished work on the new Murdy Family Organ for the Basilica of the Sacred Heart, Wooley started working on pipes for a mixture stop in a new project. Mixtures can have as many as seven pipes per note producing rich chords at a keystroke. “If you do something 600 times in a row, you get pretty good at it by the end.”

When he got his first look at the completely assembled Murdy rising high above the quiet, empty church, the novice’s eyes locked in on those façade pipes, his heart more full of anxiety than awe. “I was scanning, trying to make sure I didn’t screw up anywhere.”

They must have checked out okay. One week before the Murdy’s dedication concert on Jan. 20, Wooley and McLeod returned to Notre Dame to move a smaller Fritts organ from its temporary duty post in the basilica’s west transept to its permanent home in the Moreau Seminary chapel. McLeod took the opportunity to play the Murdy once more before heading back to Seattle. Wooley, who plays a little organ along with all those other instruments, stood by and listened. The anxiety was gone, replaced with something else. Walking outside, he summed up the feelings of every one of his older, more experienced colleagues. “What a way to make a living it is,” he said to McLeod, “building something like that.”

John Nagy is an associate editor of this magazine._