In 1720, Johann Sebastian Bach, 35 years old and still making a name for himself, still ascending to the heights of his powers as a composer, paid a visit to one of his heroes. A leading composer of the day, Johann Adam Reincken had held the prestigious post of organist at St. Catherine’s Church in Hamburg for nearly 60 years. Bach had studied his works since childhood, and when he sat down at Reincken’s instrument and improvised a fantasia on a familiar Lutheran chorale that paid tribute to Reincken’s own interpretation, the music is said to have lasted an hour. The older man, the story goes, was awestruck. “I thought that this art was dead,” he said, “but I see that it lives in you.” 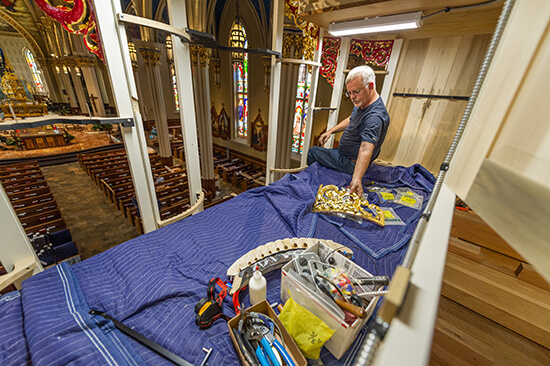 Nearly three centuries later, anxieties about the future of improvisation as a skill set linger among organists, but Reincken’s fears might have been better placed on the St. Catherine’s organ itself — nearly destroyed when Allied warplanes firebombed Hamburg in 1943. The attack devastated the city, killing and wounding tens of thousands of civilians, and the anticipatory rush to save the city’s historic treasures along with its citizenry fell similarly short of the mark. Only about 500 of the pipes survived that bombing — and the decades of storage and neglect that followed the war. Yet they were enough, Bruce Shull says, to establish the “tonal direction” of the organ’s reconstruction, a project that the American organ builder and historian and his employer, Paul Fritts, were invited to join during its final stages in 2013.

Billed as “an organ for Bach,” the project identified the genius composer’s 1720 visit as its historical target for the reconstruction. Shull’s task was to lend the Dutch firm leading the work a hand with the tuning and final voicing of pipes both new and old, some of them dating to 1630. When the refinement of the organ’s historical sound was complete, Shull got to hear the church organist play An Wasserflüssen Babylon, the very piece Bach had elaborated for Reincken. “It’s like a little bit of time travel,” he says. “You hear that and you think, ‘It’s probably pretty darn close to what that sounded like when Bach played it 300 years ago.’”

For the Ohio-born Shull, now 63, the rare international collaboration marked a personal milestone as well: 40 years as a key player in the resurgence of traditional organ building in the United States. “It’s a real treat to get to work on something like that, to be trusted with a piece of history,” he says, and you need a full career to prepare yourself for it.

Earning that trust was a lifelong project that began in 1973 when Shull, an aspiring organ performance major ready to start his junior year in college, embarked on a little improvisation of his own. Though he’d never had so much as a high school shop class, he knew he wanted to build organs more than he wanted to play them, so he introduced himself to a young, emerging builder named John Brombaugh, whose work he admired. A Cornell-trained electrical engineer and classical music devotee, Brombaugh had decided to abandon the 20th century trend toward the electronic imitation of organ sounds in favor of making instruments that produced the real thing. When Brombaugh called Shull that fall, saying he needed help to finish work on a tracker pipe organ by the following spring, he was just beginning to make a tidal wave in the organ industry with his historically inspired mechanical-action instruments.

Shull took the risk — the essence of improv — and quit school one month into the semester.

“It was a good thing to have done,” he says. “They trained me entirely there: How to use machines and how to think about how you make something from a big chunk of wood. Metal, too, for that matter.” Working for Brombaugh, legendary for his high standards and his irrepressible enthusiasm for the craft, was a sprint. “He runs on high voltage,” Shull recalls. “He wears you out trying to keep up with him. In two years, I learned an incredible amount of stuff.”

In 2004 Shull led the restoration of a 200-year-old organ designed and built by America’s first native-trained organ builder, David Tannenberg. It was the largest surviving example of an 18th century organ in the United States.

“Because he went through so many employees,” Fritts adds, Brombaugh “peppered the country with organ builders.” Shull would later work for two of Brombaugh’s former partners, George Taylor and John Boody, when they set up their own workshop in Staunton, Virginia. In the meantime, Shull’s work as an apprentice on a pair of notable Brombaughs would shape his career in other ways.

One, for the First Methodist Church in Oberlin, Ohio, led him back to school to finish his degree. Oberlin College has a world-famous conservatory and, at the time, it offered an individual majors program that allowed students to design their own approved courses of study. Shull “did everything that a performance major would do,” he says, playing recitals, deepening his knowledge of music theory and history and the compositional literature, convinced that it was important for an organ builder to understand the music and the needs of the organist. He also added courses he felt would prove helpful to an aspiring builder — in chemistry, physics, German, mathematics, logic and art — and left with an improvised, unique Bachelor of Fine Arts degree “more or less, in organ building.”

The other organ, which Brombaugh finished for Grace Episcopal Church in Ellensburg, Washington, made a splash at that year’s national convention of the American Guild of Organists. It caught the attention of a young man working in his father’s backyard organ shop in Tacoma, too. “I first heard the Ellensburg Brombaugh on a radio show that Beth Barmer did on KING FM in Seattle,” Fritts says. “I immediately thought . . . ‘These are sounds I haven’t heard. I wonder if this is it?’”

By 1977 when Shull finished at Oberlin, where he’d met and married a fellow organ student named Shari Porter, Brombaugh had moved his operation to Oregon. Having no obvious place to land, he went to work for himself, setting up shop in his father-in-law’s garage in Charleston, West Virginia. He built clavichords and regals, a kind of Renaissance reed organ, a harpsichord for a friend and a four-stop chapel organ for Shari’s former organ teacher.

Soon he took on a contract to build a more complex 16-stop organ for a church back in Ohio — a Herculean commission for a new builder. Shari, pregnant with the Shulls’ first child, and her brother worked with Bruce part-time. Together they built nearly everything from scratch including some of the pipes, buying the rest pre-made from the Netherlands, and finished the piece in two-and-a-half years.

Meanwhile, Boody and Taylor had gone into business for themselves and moved to Virginia. During the transition from Ohio, they’d overnight with the Shulls in Charleston and, over time, talked Bruce into joining them. He worked at Taylor & Boody for 24 years, specializing in pipe voicing and organ design, historical research and the documentation of company projects. In 2004, near the end of his tenure there, he led the restoration of a 200-year-old organ designed and built by America’s first native-trained organ builder, David Tannenberg. It was the largest surviving example of an 18th century organ in the United States, its keyboards were lost forever and its pipes had suffered everything from age to careless storage to — as one account had it — trampling by a herd of Boy Scouts. The project, a major success, caught the attention of CBS’ Sunday Morning.

Then the time came for one more life-improvisation, the Shulls’ move to Washington state, where Shari continued her work as a church organist and Bruce’s inestimable experience fortified Fritts’ workshop. “A lot of the reason for me to come here was to make life easier for Paul,” he says. The two men share the same comprehensive skill sets, from woodworking to design to the leadership of their small team of self-driven craftsmen.

For the new organ at the Basilica of the Sacred Heart, Shull did the finishing work on its thousands of flue pipes, shaping and tuning the raw products of the pipe shop into the instrument’s colorful palette of sounds. The expertise paid off — the skillful “pre-voicing” of these pipes at the Tacoma workshop is a big reason why Fritts’ team finished installing the Murdy Family Organ at Notre Dame more than a month ahead of schedule.

Fritts supports Shull’s deepening interest in restoration work, too. The company is looking for a home for his museum-quality restoration of an 1819 organ built for a Pennsylvania church by David Tannenberg’s son-in-law and shop foreman, Philip Bachman — the only surviving example of his work. It’s the kind of deft foray into historical sleuthing and reverse engineering that, along with their evident gifts in the creation of new instruments, has opened doors for Shull and Fritts overseas, like the opportunity they had in Hamburg.

“We feel fortunate and honored to be asked to be a part of anything in Europe,” Shull says, noting the gulf that separates organ building cultures on the two continents. The American revolution in traditional building has flourished on an ethic of openness — Fritts and Shull talk all the time with their peers at Taylor & Boody, at Martin Pasi down the road, at Richards, Fowkes & Co. in Tennessee, sharing information, insights, even drawings.

Such collegiality often surprises European builders, who in Shull’s experience are more open to shop talk with their American peers than they are with each other. Fritts & Co. have cultivated strong friendships on the continent. The Hamburg project was “really a first for a European builder to collaborate with American builders on much of anything,” Shull says. And if the success of the work on “Bach’s organ” is anything to go by, it appears Europeans may be more willing to take such calculated risks. To improvise — if it means the art of organ building lives on.