When he was ready to start high school in 1993, his family moved across Puget Sound from Tacoma to a tiny logging town called Shelton. Beautiful, the kind of place he didn’t mind visiting for a few lazy days each summer. But for a city kid, it was nowhere.

Overnight, and far from the world where he’d begun finding his path as a musician, Erik McLeod at age 14 encountered the shock of displacement and loss that the young seem to suffer whenever the path veers from a life they thought they could count on. 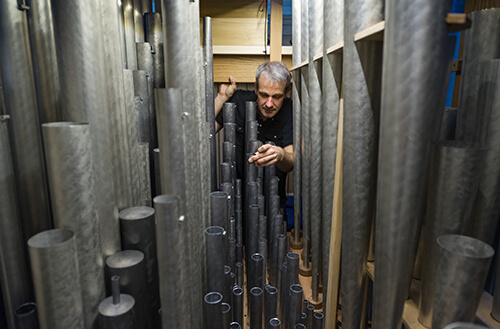 It sure didn’t feel like it at the time, but for McLeod, now 37, teenage exile would turn out to be one of the best career moves of his life.

Self-styled “Christmastown, USA” because of the large number of fir, pine and spruce trees that local growers supply to American homes each December, Shelton happened to be rich in one resource of life-giving importance to McLeod: a pair of small, expertly crafted mechanical-action pipe organs created by a Tacoma-based designer and builder named Paul Fritts.

Shelton’s Methodist church is home to Fritts’ Opus 1, completed in 1979, a two-manual, 16-stop miniature powerhouse of a pipe organ that sits snugly between choir pews. One mile away, St. David’s Episcopal boasts Fritts’ second installed piece. The two bear the hallmarks that would carry Fritts’ reputation far beyond the congregations of the Pacific Northwest: efficient design, responsive action, rich materials, elegant carvings and a respect for the practices and accumulated wisdom Fritts finds in the best historical examples of his craft.

All that, and a sound unlike any other that an organ aficionado might hear without traveling many a mile. And there it was, in Shelton.

Music was McLeod’s comfort. He’d cut class and play the organ as a way to “repurpose” his time.

He’d started tinkering with the piano as a tot back in Tacoma; then, after six years of piano lessons “caught the organ bug” by 12, when the organist at Annie Wright Day School gave him permission to practice on the chapel’s electric pipe organ and even fill in sometimes during services. It was no great shakes, she told him, but he was welcome to try it.

One benefit of that organ, he notes, was that it needed repair. That meant small projects for a young organ builder in the making. “I became interested in how the organ worked,” he says.

So the sixth-grader with uncorked curiosity started doing his research. The school library had a copy of The Art of Organ Building, a stiff-collared, two-volume tome published in 1905 by George Ashdown Audsley, best known as the mastermind behind the grand organ at Wanamaker’s (now Macy’s) Department Store in Philadelphia — at more than 28,000 pipes, the Wanamaker remains the largest fully playable organ in the world. Soon, McLeod bought his own copy of Audsley’s book.

He was hooked. Then the family moved to Shelton.

The Fritts organ at Shelton Methodist was a different creature from the modern piece he’d played at Annie Wright. “The first time I played it, I thought, ‘Oh my goodness, what is this?’” he says. “This was my first time playing a real organ. It was just a tremendous shock.”

Unlike the move to Shelton, this particular jolt turned McLeod’s light back on. He would fill in for the church organist from time to time, and the instrument itself became his teacher.

Playing an organ like Opus 1 requires sensitivity and “tends to reveal some bad habits while offering some advantages,” he explains. “There is no faking it. If you make a mistake, it will be heard. But it was so engaging. For the first time I had the sense the instrument was giving me meaningful feedback.”

And the sound was medicine. Years before he met its maker, Paul Fritts’ organ became a means for McLeod to work through the daily cares of a teenager’s life.

When at last he got his driver’s license and freedom, a friend invited him to put his Audsley to use and help install a refurbished Wurlitzer in the Washington Center for the Performing Arts in Olympia, half an hour away. He spent every day there that summer. By the time he graduated from high school, he was ready to take on a solo installation of a used instrument for a funeral home in Aberdeen.

The technical aspects of organ building were swiftly stealing the young man’s heart from organ performance and leading him inside the instrument, which suited him fine. He’d never fully learned how to read the music anyway.

One day he walked out of a community college classroom and never went back. Instead he “spent a couple of years meandering,” lending a hand on small projects like the Aberdeen organ and repairing earthquake damage on the Olympia Wurlitzer. His path led him back to Tacoma, where a friend from his Shelton days, a rising star in the organ world named Douglas Cleveland, introduced him to Paul Fritts. The three went to lunch together and McLeod soon accepted a job offer at Fritts’ workshop on the city’s south side. He started September 10, 2001.

McLeod soon discovered that playing mostly by ear as a child teaches you to listen, which serves one well as an organ builder. Tuning and voicing each pipe so it blends perfectly — not just with the others in its rank, but with every rank in the organ — requires a rarified sense of sound and enough patience to make thousands of tiny but necessary adjustments.

Today, McLeod is an indispensable part of Fritts’ on-site installation team with a talent for improvisation that frees his colleagues to move around the church spot-checking the results of their work — or simply to sit in a pew and savor the music.

Minutes after refining the last rank of pipes on Notre Dame’s new Murdy Family organ this fall, McLeod gave it a magnificent workout — a 15-minute exploration of the organ’s five divisions from its massive bass pedal pipes to its piercing Spanish trumpets to its lilting flutes — then descended from the loft with an irrepressibly boyish grin.

“We loved it,” one visitor said. “It must be exciting for you, too.”

John Nagy is an associate editor of this magazine. Email him at jnagy1@nd.edu.