Joe Green is a boat builder by trade. It’s inherently nomadic work that has taken him as far away from his hometown of Poulsbo, Washington, as the Netherlands and the Chesapeake Bay, and he’s worked on everything from historic fishing-boat replicas to rowing shells to the 42-foot motorsailers of the rich and famous. 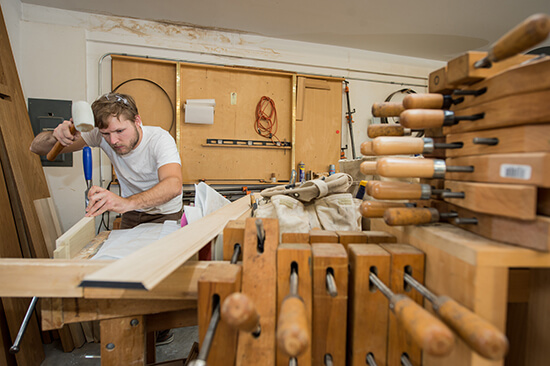 Now he builds organs for a living. He still likes boats. But during his crash course in organ case construction and finishing that began with work on the instrument now in Notre Dame’s Basilica of the Sacred Heart, he found that pipe organs get a little more respect and a lot less abuse from their owners.

“The attraction to a place like this,” he says one morning in the wood shop at Paul Fritts and Company Organ Builders in Tacoma, “is that the work we do is going to be around for hundreds of years.

“First of all, it’s this gigantic piece of furniture, but then it’s the most complicated instrument ever devised, and to marry them both, especially with the religious overtones, it’s a pretty cool thing to be a part of.”

He didn’t quite get the same feeling while making a boat for a booze cruise. Even at Seattle’s Center for Wooden Boats, a hands-on museum of maritime history where Green trained volunteers who’d never used tools before in the “really difficult carpentry” of repairing and building watercraft, abiding satisfaction proved elusive. He’d take an old sailboat apart and show his novices how to re-plank it, re-frame it and put a new deck on it, then send it out the door to the livery, where museum visitors could rent them and learn how to sail.

He was proud of his volunteers and the level of craftsmanship they achieved. “It’s a really great premise,” he says — and he means that — “but it’s heartbreaking to see your work crash into a dock at five knots.”

Green, 29, found his vocation as a carpenter out of a different, deeper kind of heartbreak. His father died when he was 16 years old, and to help Joe and his brother grieve their loss, their stepfather invited them to help him build a cottage. They’d worked in his shop before, Joe says, “but that was the first project where I was actually building something, and it was, in retrospect, a really terrific way to deal with that emotional stress.”

He graduated high school with a near-perfect GPA and tried college for a year before realizing he wasn’t into it. But he met his future wife there, and while they were contemplating their options Green found his way to a boat-building school close to home on the Puget Sound. Most of his classmates were men over 70 probing for a meaningful retirement hobby. Green was there to master a trade.

One intense year later, Green was working on the replica of a 17th century Dutch fishing vessel in Uitgeest, Holland, living on a boat with no heat in winter and learning enough of the language to order a beer and ask for a shop tool. In St. Michael’s, Maryland, he helped rehab a 120-year-old oystermen’s boat called a bugeye, a two-masted descendant of the log canoe. But where the commercial jobs he landed along the way had little of the substance Green wanted, he found that this kind of museum work, rewarding in its own way, lacked the function he was looking for.

“It was a truly wonderful experience working on such an old and unique workboat as the Edna Lockwood,” he says. It would never crash, but it also never left the dock.

Green started at the Fritts workshop in April 2015, scoring a four-month tryout as an understudy to Fritts’ longtime carpenter, Andreas Schonger, and learning as work on the Murdy Family Organ went along. The opportunity came with a completely different skill set — a new vocabulary, a new rhythm, new drawings to work from each day.

“I’m used to putting things in steam boxes and making them bend into complicated shapes, and then making the joinery work in the round. Here, everything is flat and square,” he says. On the other hand, “there’s some complicated pieces that definitely translate from boat building, where there’s a lot of fitting and finicky chisel work and stuff like that.

“Organ building is by far the most complicated form of woodworking out there.”

Whatever tests of knowledge, endurance and skill he needed to pass, Green secured himself a permanent place on Paul Fritts’ small staff by the end of that year, meaning his nomad days are behind him.

His final exam is currently on display in Sacred Heart’s organ loft, where it’s expected to remain, intact and beautiful, for a long, long time.