Revolutions begin with the quiet decision and the small act. So picture this scene of would-be rebellion:

Paul Fritts, a shy boy in his early teens. The son of a college professor who is both a musician and a craftsman, he is an attentive, fluid violinist. He has friends but spends his happiest hours doing projects in his father’s backyard workshop: Carpentry. Photography. Car restoration. Pipe organ repair. 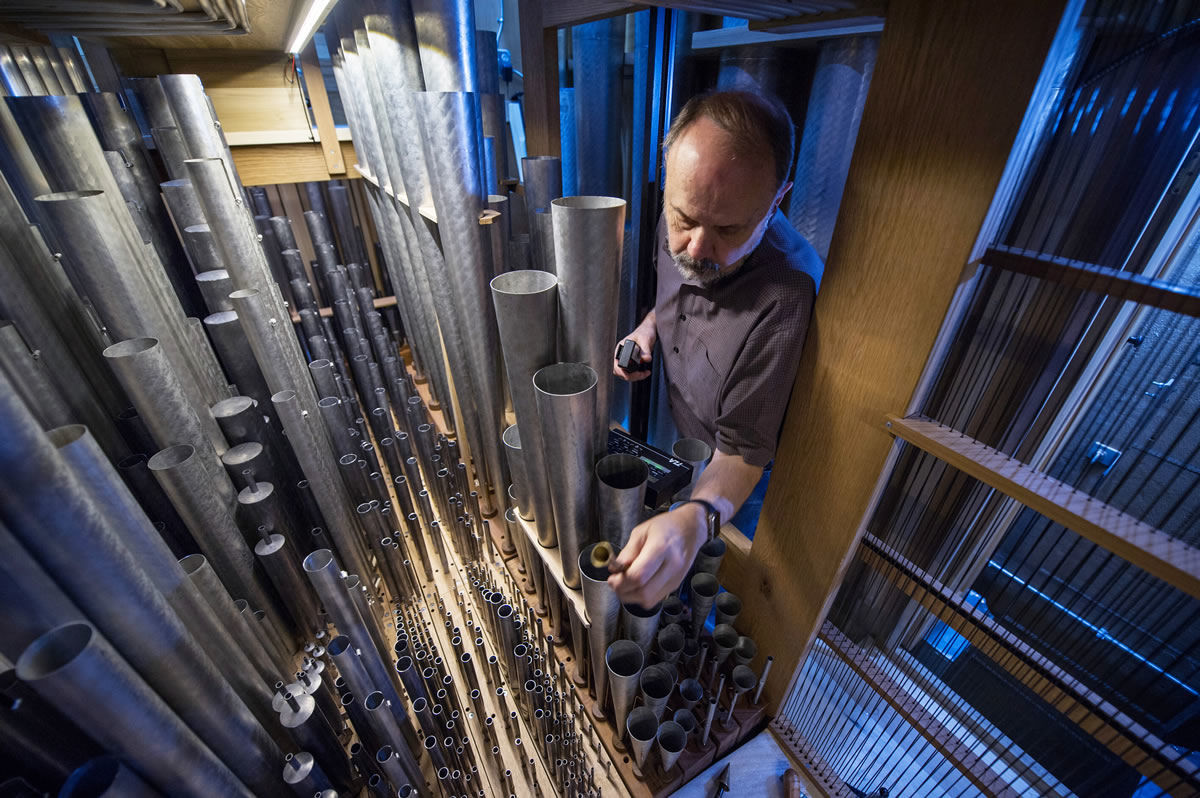 It’s the 1960s. Tacoma, Washington. In the eighth grade, Paul and his classmates take an aptitude test and are assigned a report on a profession. Sky-high on mechanical and musical ability, Paul chooses from a short list of jobs that combine both sets of skills and tells his mother he wants to write about being an organ builder. “And my mother, who had invested heavily in my violin lessons, said, ‘No, you’re not.’”

This was out of character for Jean Fritts, who had a degree in education and sang and who “always let her children do what they wanted to do, and supported them,” her son the organ builder says.

Maybe she objected because the boy’s father, Byard, who’d played trombone in the Navy during World War II under the baton of George Liberace, brother of the famous showman, and who taught composition, choral conducting, piano and organ down the road at Pacific Lutheran University, kept his mechanical endeavors private — for the most part. Byard Fritts had learned carpentry from his own father and built the Fritts’ home on a woodsy suburban street. Eventually he ran a business out of his workshop, assembling organs out of pre-made parts for small churches. He had even restored a Model A Ford. “He had a lot of respect for mechanics,” Paul recalls, but on campus “he didn’t want to be labeled a grease monkey.”

Whatever her reasons, the boy’s mother may actually have won that minor battle — “I frankly don’t remember if the report was about organ building or violin playing,” he admits. The younger Fritts continued to help with his dad’s business and play the violin all the way through three enriching college years as a performance major at the University of Puget Sound. Then he made his final choice. He dropped out, grateful to the school for all it had given him, but done. “There was not really anything that the school could offer that would negate actually getting my hands dirty, building organs. Off I went.”

In 1979, he took over his father’s business with the vision of reclaiming the best practices of organ building as it had developed in northern Europe in the 17th and 18th centuries. Fritts wasn’t alone in these ambitions, but his expanding shop was fast becoming one of the best in the United States and Europe, making instruments noted for their carefully researched acoustical acuity, their respect for history, their efficient design and execution, their classic beauty. By 1991, the organ he built for Arizona State’s School of Music debuted with an academic symposium on “The Historical Organ in America.” Eight years later, scholars writing in The Cambridge Companion to the Organ could cite Fritts and others by name as having revived “the notion of organ building as a . . . hand-crafted enterprise.”

The soft-spoken rebel had, in fact, joined a revolution against the so-called neo-Baroque or Organ Reform Movement. The Reform had begun decades earlier as a reaction to trends toward factory production and to musical flaws in the Romantic organs of the late 19th and early 20th centuries, which, Fritts says, too often lacked brilliance and breadth and couldn’t lead hymns very well.

Reformers studied the old organs and the master builders of the Baroque period for guidance. They preferred mechanical over electrical connections between keys and pipes, stop-knobs and sliders. If that sounds a lot like what the builders of Fritts’ generation and mindset would later try to do, it is — up to a point. Things started to take a wrong turn, Fritts argues, toward a “misreading of the true Baroque aesthetic.” Reaching for clarity, the worst of these neo-Baroque organs could be “steely, harsh, screamy, chiffy,” where the old Baroque masterpieces, he says, have “warmth, character, sweetness,” leading congregational singing in a “more relaxed manner.”

What’s more, in its search for guiding principles, the reform movement became standardized and rule-bound, at least in the revolutionaries’ estimation. One writer characterized the shift as “more neo than Baroque.” In the end, some reformers were unable to resist the allure of the assembly line in response to high demand for new instruments.

The time had come for a more refined, integrated, sensitive approach. Quality over quantity. Research and responsiveness over rules. Magic over mass production.

In his early 20s, Fritts made a special trip with his father and one of his father’s former students to hear the organ that a then-Ohio-based builder named John Brombaugh had made for a church two hours east of Tacoma. “It was the first time I had come into contact with a new American organ that was truly influenced by the antique organs,” he says. “And it was a revelation.”

Fritts determined to follow Brombaugh’s stirring lead. Today the Fritts opus list includes more than 40 original organs, a major restoration and the reconstruction of a historically significant early American piece. Professional organists have made 20 recordings on his instruments. Notre Dame and the Congregation of Holy Cross now own four Fritts organs between them.

Being a trained violinist helped him reach this level of success. Most instruments are fixed-pitch: Press a key, make a note, and the musician’s main task is to support the tone. But with the violin, “you develop an ear for both pitch and tone, and you also learn about creating a tone next to your ear that’s supposed to project properly into an auditorium, to the listener. That’s exactly what a voicer does with the pipes.

“I see organ building as a mission to keep alive and further an art form that has been with us for many, many centuries,” he says. “It’s a real privilege to go to Europe and be able to study organs that are still in use, that have parts that date back to the late 1400s, and complete instruments that date from 1500. And, yes, they’ve been restored, even a number of times, and changed and altered in some cases, but the essential skeleton and system is in place. And to experience the musicality and the unique, handmade quality of these instruments: You come away from an experience like that . . . and you want to create new instruments with the same kind of magic.

“That’s been a big, big focus. And that’s really a big part of what motivates me.”

Fritts wryly describes himself as a “control freak,” but his employees find him approachable and collaborative. While the vision and the designs are, in the end, his as the director of the workshop, he’s kept his firm small, harmonious and ego-free, a place where even novices feel free to offer insights during all phases of a project.

“This place is really good at self-motivating. We don’t do an awful lot of, for lack of a better term, babysitting people, having to watch over what they’re doing,” says master builder Bruce Shull, who joined Fritts’ company in 2005 with nearly 30 years’ experience in the trade.

“It’s an odd bunch,” lead carpenter Andreas Schonger says, smiling. “But we all seem to fit.”

And that eighth-grade aptitude test wasn’t wrong. Fritts matches patient, flexible, focused leadership with a rare gift for design. The result is an integrated vision of organ building — whether large or small, a Fritts organ is a distinctive, consistent product. “Paul is known for getting more pipes into a space than other builders,” Notre Dame graduate student Michael Plagerman says. “He has the keenest ear I’ve ever encountered,” adds Craig Cramer, Notre Dame professor of organ. And in an age of nanotechnology, international space stations and smart just-about-everything, the mechanical-action pipe organ remains one of mankind’s most complex creations.

“Some of what Paul does with design just still boggles me,” says Shull, who has designed quite a few organs himself but admittedly none as big as the Murdy. “He can keep more in his head than anybody I’ve ever met. I can see it all when it’s done, and I can keep a fair amount of that going, too, but I stand in awe of what he’s accomplishing with the design of an organ like this. It’s a real achievement.”

Now 65, the recognized distinguished alumnus of the university he attended but from which he didn’t graduate says he doesn’t expect he’ll ever build an organ larger than the basilica’s, though he leaves the possibility open. Fritts and Shull have spoken about retirement and the future of the business, but they’re not ready to step away just yet. The workshop’s website lists three current and forthcoming projects to be completed by 2019, the firm’s 40th anniversary, and more are reportedly underway.

As for what happens after that?

“Oh, you wonder,” the revolutionary says. “I’m going to be at this for another ten years.”