A long time ago in a research and development laboratory far, far away, Raphi Giangiulio made a little piece of cinematic history.

It was the spring of 1999 and the much-anticipated premiere of Star Wars: Episode I — The Phantom Menace was queued up to break box office records — and disappoint fans of the great space epic — all over the world. 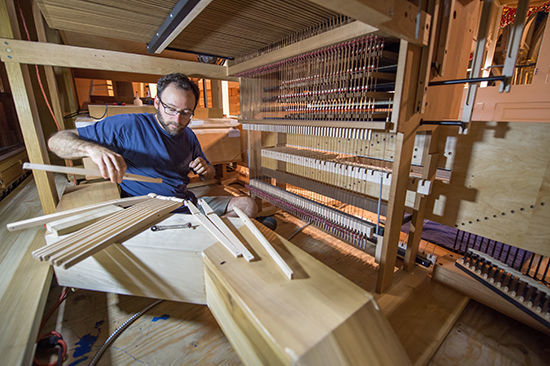 Of course, that last part wasn’t Giangiulio’s fault. Nor was he in a position to harvest any of the film’s financial windfall. But he did play an important role in a technological breakthrough that few but the movie industry’s closest observers may remember.

Three years out of the University of Texas at Austin, Giangiulio was a mechanical engineer working in Texas Instruments’ DLP unit. DLP stands for Digital Light Processing, and the team had been developing the very first prototype of the digital projectors that would soon replace traditional reel-to-reels in theaters pretty much everywhere. His colleagues designed the electronics and the optics, he says. “I would make everything to hold it all together.”

When The Phantom Menace debuted in Los Angeles and New York on June 18 that year, TI projectors screened the film in two movie houses. The film’s producer, Rick McCallum, called it a milestone. “For the first time ever,” he said, “a filmmaker can be certain that the audience will see and hear the film in the way the filmmaker intended it to be seen and heard.”

Giangiulio stayed at TI eight “fun” years, but not every project was as exciting as the projector. One day while web surfing he came across the site of a woodworker who was showing how he’d made his own wooden band saw and done other sorts of cool, improbable projects, like a one-stop pipe organ. “Very crudely done,” Giangiulio, 43, recalls, “but it worked. I was like, ‘What? You can make an organ in a woodshop?” It seemed like the ultimate project.

So he took it on. He spent about a year researching organs, buying books like Organ Building for Amateurs (such a book does exist), visiting local builders, designing and, finally, beginning to build one himself. But it was going to take a while. He soon realized there was no way he could finish the project and keep his day job.

He quit the day job.

See, Giangiulio grew up around music. His father is a professional trumpet player and conductor of the Greater Dallas Youth Orchestra. Not many kids grow up accompanying their fathers on trumpet-and-organ tours through France, but he did, and in every cathedral and church along the way, the organ was his favorite thing to see.

The woodworking part didn’t spring out of nowhere, either. As a boy he’d made percussive wood blocks in his father’s woodshop, tinkering his way toward sounds he liked. By 12 or 13 he’d made a xylophone. Now, as an underemployed mechanical engineer, he’d spend the next five years of his life working on his first organ, a five-stop instrument with 250 wooden pipes, taking part-time design jobs mainly to pay bills and fund long vacations — hiking and camping, or visiting U.S. organ builders or his mother back in France.

The real test came when he finished the project in 2007 and had to decide whether to return to engineering full time. Three years, and another three homemade organs later, he landed at Paul Fritts & Company Organ Builders in Tacoma, Washington, where he’s become the shop’s manual — or keyboard — maker. Now instead of pixels, plastics and metal, he works mostly with wood, ebony and cow bone, sanding and shaping each piece to perfection, and making the components that essentially link the keys to the pipes they play, spreading and coupling and redirecting this “key action” from the width of the keyboards to the width of the entire instrument.

Fritts’ longstanding reputation for superbly responsive key action only grows with each opus.

The composer and concert organist Carson Cooman purchased one of Giangiulio’s three continuo organs — portable instruments, typically of one to three stops, most often used in chamber music. But that first five-stop organ remains in Giangiulio’s own home, even though he doesn’t play.

“No, I don’t play keyboards,” he repeats in response to the double-take. He plays trumpet in the Tacoma Community College orchestra. The truth is, he explains, there aren’t a lot of organists in the organ-building world.

Instead, he invited an organist to play a dedication recital for Giangiulio Opus 1, and asks musicians to try it out whenever they stop by. “It’s a thrill for me to have an organist over to actually hear it, because it sounds neat. All the pipes are made of wood because I didn’t have a metal shop, so it’s very fluty,” he adds, “but for a flute sound it has a very warm sound.”

He’s still an engineer. He keeps in touch with old colleagues and friends and takes on the occasional design contract. But he finds that pipe organs satisfy his mechanical inclinations. “A pipe organ, it’s a giant machine,” he says. “There’s lots of really cool science and physics behind how the pipe organ works, how all the actions work, how the bellows regulate the pressure, how the pipes make their sound.”

Digital projectors are here to stay. So is the new organ in the Basilica of the Sacred Heart. While he may seem light-years removed from that lab bench at TI, Raphi Giangiulio is still making pieces of history. Big ones.