Yes, there is such a thing as a big, national convention of organists each summer and there in 2015 was Collin Boothby. Then an undergraduate organ student at Texas Christian University, he was contemplating aloud his options for graduate school.

Oh, he was told, you need to go to Notre Dame for your master’s degree. They’re getting this great new organ. 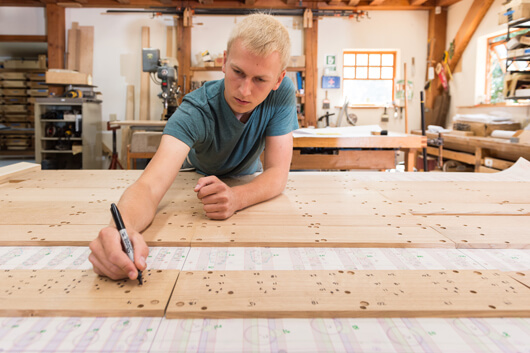 Yes, he said. I know. My brother is helping to build it.

Zane Boothby told that story matter-of-factly one morning that July as he prepared a rack board in which a rank of organ pipes would sit, carefully lining the precision-cut holes with strips of felt that will cradle each pipe, hold it in place and keep it from rattling while the instrument around it sings and thunders.

“It always comes full circle in the music world,” he said, eyes on his work — and you wondered how it is that a kid at 20 with one year of college to his name could know something like that. And how no one is looking over his shoulder, even when he’s the one drilling and burning holes in expensive oak that took hours to mark, for an instrument meant to outlive him by centuries, and which already has a professional reputation. His employer, Paul Fritts, had made 20 organs before Boothby was even born.

The answer, of course, is that Boothby is no kid. Now 21, and halfway through his junior year as a trombone performance major at Central Washington University, where he’s played in the orchestra, wind ensemble, jazz band, trombone choir and brass choir, he has spent his summer and winter breaks since 2012 in the Fritts wood shop. He’s helped finish case work and make parts for the wind chests — those broad, wooden vessels that sit beneath the rack boards — and for the sliders that move back and forth whenever an organist opens or closes a stop.

He has also assembled carbon-fiber trackers that connect keys to the pallets that let wind into pipes. And when it came time to pack and unpack the Murdy Family Organ en route from Tacoma to Notre Dame, Boothby was there, too. “A lot of little things,” he says.

Andreas Schonger, Fritts’ lead carpenter, smiled that day in 2015 as he downplayed the amazement that Boothby’s skills and growing responsibilities typically elicit. “He picks up stuff and he learns really quickly,” the German-born woodworker said of his American understudy.

“You’ve got to watch him a little bit,” Schonger added, apparently untroubled that Boothby was working solo in the wood shop — downstairs and out of earshot — at that moment.

The Boothby brothers grew up playing piano and helping their father fix up rental properties. In high school, they started taking organ lessons from Shari Shull, the organist at the Lutheran church where their mother was pastor. Shull’s husband, Bruce, works for Fritts and at some point the Boothbys found themselves visiting the workshop. Zane’s seasonal apprenticeship “was a natural outgrowth of that,” Bruce Shull says.

His handyman skills, mechanical aptitude, “natural curiosity for how things work,” and calm, focused personality all made him a solid fit for learning the trade and, Shull adds, a good match for the low maintenance, ego-free culture at Fritts.

Then there’s his ear for music, which recently helped the towheaded trombonist win a competition that entitles him to perform a concerto with the CWU orchestra this December.

“Playing trombone helps me as an organ builder because the trombone is a non-fixed pitch instrument,” he says. That means you don’t press a key to play a note, but have to find it precisely with your hands and your mouth. “All the adjustments in pitch, tone and articulation are done by ear,” he explains.

When it comes to tuning organ pipes, one could hardly ask for better training.

For his part, Boothby considers organ building a possible career track and sees no reason it should stop him from becoming a professional musician as well. He’s already made organ maintenance and installation trips as far afield as New York, Arizona and, most recently, Notre Dame, Indiana.

So, while Collin Boothby ultimately chose to pursue his organ studies at another university, Zane’s pride in the Murdy — now installed and playing in the Basilica of the Sacred Heart — is undiminished.

“It’s very rewarding work,” he has said. “Starting with rough-sawn lumber, you see everyone’s part take shape, and the collaboration of everything fitting together and working in the end.”

John Nagy is an associate editor of this magazine. Email him at jnagy1@nd.edu