Roger Huang saw a bumper sticker that read, “If the climate were a bank, it already would have been saved.” The finance professor and dean of Notre Dame’s Mendoza College of Business admitted he might seem like the type to take fender-bending offense at that message. 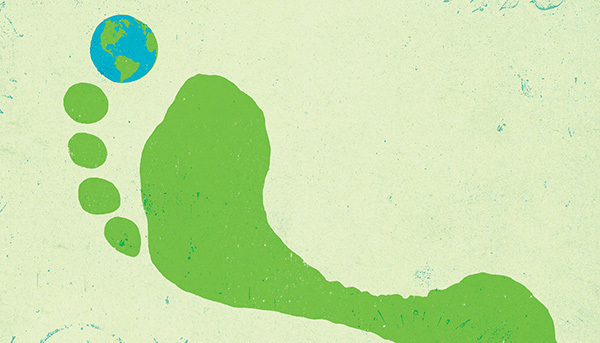 Instead Huang used it to introduce Climate Investing: Transition to a Low-Carbon World, Mendoza’s two-day campus conference in late September. He said the scale of predicted damage from climate change, with economic fallout estimated to reach hundreds of trillions of dollars, will require an environmental bailout in which human investment must be total. That means individual, institutional, international and, perhaps most powerfully, financial backing.

The global ecosystem, in other words, needs to be deemed too big to fail.

Skeptics might wonder if such massive coordinated efforts are even feasible or, should they happen, sufficient. Like carbon, a sense of doom collects and pollutes the atmosphere surrounding the subject of climate change.

With good reason. The forecasts are bleak. Jessica Hellmann, who recently left Notre Dame to become director of the University of Minnesota’s Institute on the Environment, described the future in dystopian “choose your own adventure” terms. Her conceit, taken from a popular children’s book series, offered visions of a world warmer in average global temperature by 2, 4 or 6 degrees Celsius.

A rise of 2 degrees in world temperature, her best-case scenario and one not easily achievable on the current trajectory, heralds more climate extremes, droughts, wildfires, agricultural upheaval and reduced biodiversity. If the overall planet temperature rises by 4 degrees, naturally occurring carbon will combine with human-generated emissions to compound warming. At 6 degrees, Hellmann said, “we really don’t know what the story looks like.”

Frank Incropera, a Notre Dame mechanical engineering professor who previously served as dean of engineering, listed potential remedies at the nexus of technology, policy and investment — increased energy efficiency, biofuels, solar, wind and nuclear power. Glimmers of hope. Then: “Even if we do all of this correctly,” he said, “it’s still not going to be enough, because what we need is a change in cultural and behavioral norms.” That is, less consumption and waste, and greater social value placed on energy conservation.

A sympathetic audience supported Incropera’s point but also embodied the challenge of making the necessary changes. Conference participants came from all over the world, trailing greenhouse gases in their wake. Paul Hawken, whose Project Drawdown devises what it calls “realistic, optimistic and empowering” ways to reduce emissions, confessed to the dissonance he felt flying into South Bend and his unsatisfying justification that it’s for a greater good.

David Orr, a professor of environmental studies and politics at Oberlin College, captured the tension inherent in living in the modern world and trying to leave behind a habitable planet. “Am I optimistic? No, not necessarily. The big numbers have this kind of remorseless quality of working against us,” Orr said. “Am I in despair? No. I’m hopeful, and hope is a verb. Hope means you have to do something. You’ve got to act.”

To that end, Hawken argued that apocalyptic prognostications, however accurate, are counterproductive. Instead of stirring people to action, the drumbeat numbs and lulls them into complacency. “It’s just human nature,” he said. “It’s too much.”

So we wait passively for Cowboy Bob, the rescuer of every damsel in distress and runaway stagecoach of Amy Domini’s childhood television viewing. But there’s no Cowboy Bob, no singular hero who can save the world from the collective impact of billions.

The founder and CEO of Domini Social Investments, Domini evinced little confidence in consumers or governments to address climate change in any significant way. And, as long as the corporate agreement with shareholders amounts to “my fiduciary responsibility is to make money for you at the [expense] of your grandchildren,” she believes investors will not make a positive impact either.

Domini’s objective is to direct the vast wealth in financial markets — which amounts to many times that of total global GDP — toward investments in a more sustainable future. “The only possible Cowboy Bob I see in this situation,” she said, “is a group of individuals who use the combined strength of being ethical investors to address these kinds of problems.”

Addressing the problems, not just cataloging them, was the purpose of the Mendoza conference. Within the ominous context that they all acknowledged, several speakers invoked the challenging spirit of Pope Francis’ encyclical Laudato Si’ and heeded Huang’s opening exhortation to “imagine answers.”

In a financial environment driven by investor demand for short-term growth, economic answers with more distant returns can be a hard sell. The fossil-fuel industry might acknowledge the need for a transition to cleaner energy, for example, but its immediate profit motive dissuades investments in that direction. Yes, a good idea, just not yet.

Mark Campanale, the founder and executive director of the Carbon Tracker Initiative, compared that to the position of railroad companies at the turn of the 20th century, suggesting shareholder confidence in the status quo might be misplaced. When trains and horses dominated the transportation landscape, the novelty of cars seemed unlikely to displace either. Cars were expensive, gas stations nonexistent, the existing infrastructure favored railroads, and automobile-related stocks were nowhere to be found on the Dow Jones Industrial Average. By 1914, the internal-combustion engine had transformed the economy, and companies such as General Electric, U.S. Rubber and General Motors were ascendant on the Dow.

In Ohio, a state, said Orr, “where sunshine is still kind of a theory,” sunlight is fueling an environmental and economic transformation. He pointed to Oberlin College’s Adam Joseph Lewis Center for Environmental Studies as the only fully solar-powered building on a U.S. college campus. The center generates 140 percent of its energy needs from the sun and serves as a catalyst for a larger movement at the college and in the town of Oberlin, including more green building and sustainable farming, which Orr hopes to see grow throughout the Rust Belt.

Universities, he said, are among the anchor institutions that can drive such technological innovation and economic investment. The concentrated wealth these institutions could put into green technology has the potential to expand islands of sustainability, insignificant in and of themselves, to a regional and national scale.

Notre Dame, for its part, announced steps in that direction in September. Inspired by the papal encyclical, University president Rev. John I. Jenkins, CSC, asked executive vice president John Affleck-Graves, who chairs the campus sustainability committee, if Notre Dame’s existing plans could be accelerated. The result was a commitment to eliminate coal use by 2020 and to reduce the campus carbon footprint by more than half within 15 years.

Among the means to those ends: a $113-million investment in renewable energy, including a hydroelectric facility on the St. Joseph River in South Bend, gas turbines, solar power, geothermal fields and heat recovery technology. Together the projects could reduce campus carbon-dioxide emissions by 47,500 tons, comparable to taking 10,000 cars off the road.

Jenkins added that Notre Dame will make an even larger impact through research into clean energy and climate solutions for the developing world. Notre Dame’s Global Adaptation Index (ND-GAIN) ranks countries most susceptible to damage from climate change and assesses those best positioned to benefit from environmental investment. And each year the ND-GAIN Corporate Adaptation Prize recognizes companies that make the greatest impact on the places most in need.

These projects and more have been underway for years, but Pope Francis added urgency with his encyclical. Laudato Si’ emphasized the moral imperative of interconnected actions that protect the health of the planet, promote human solidarity within communities and across borders, and serve people most at risk, a message that resonated at Notre Dame.

“It is a challenging moral vision, but one for which, I believe, our world is hungry,” Jenkins said, “and no university is better positioned to respond.”

Tom Matzzie, founder and CEO of Ethical Electric, echoed that point on the conference’s second day, urging Notre Dame to do even more. He, too, emphasized the moral necessity of preventing the climate catastrophes of a warmer world. While those disasters threaten our ecology, they also mean the world’s most vulnerable populations face an incalculable risk.

Matzzie said Notre Dame’s five-year plan to stop burning coal, “which seems slow to me, but necessary,” was just one step. He called for the University to become a leader in renewable energy production and to divest its endowment from fossil fuels. Such actions, he said, would be both practical and, with the weight of Notre Dame’s moral leadership behind them, powerfully symbolic.

For all the technical and financial expertise on display, for all the talk of declining costs and increasing profits in green technology, the overriding message of the Mendoza conference was ethical: This issue is not — and cannot — be only about the money.

“We’re talking about everything we know to be beautiful and humane and wondrous and extraordinary and magical and sacred,” Hawken said. “If the sacred is monetized in a way that it doesn’t pencil out, that says everything you need to know about our economic system.”

Jason Kelly ’95 is an associate editor of this magazine.