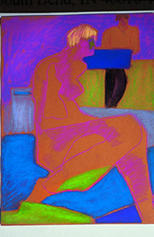 When Don Vogl retired from teaching in 1994, he and his wife, Colette, talked about fulfilling the artist’s dream. Since coming to Notre Dame in 1963, Vogl had traveled and painted throughout Colorado, Utah, Idaho, Montana, Wyoming, New Mexico and his favorite state, Arizona. He had hoped to spend his retirement with Colette amid the radiant red rocks of Sedona on the high desert plane of Arizona. So Colette cut a deal: Clear the house of his thousands of paintings, and the couple would head west.

It is not that Vogl cannot sell his work. His paintings hang in Notre Dame’s Snite Museum of Art, in offices around campus, and in buildings and museums throughout the Midwest. His work, whether portrait, landscape or abstract, has won best of show throughout Mid-America, has been exhibited in one-man shows, has been acquired by serious collectors throughout the country. He is, in fact, one of the finest painters to have taught at Notre Dame.

It is just that he is so prolific.

When University artists were given space in the Old Fieldhouse (which has since been razed), Vogl filled an entire handball court. At home, the artist has literally painted Colette into a corner, leaving her the kitchen table as the only niche to call her own. On most days even that must be quickly cleared off at dinnertime when Colette comes home from her job at a local library.

For more than 30 years Vogl never missed a day in the classroom, and no student ever took a back seat to his creative expression. But he never missed an opportunity to be an artist. While most art professors merely tolerated the tedium of long faculty meetings and other official gatherings, Vogl used those times to continue working. He would draw — drawing after drawing, sketching people in the room around him, mapping out the landscapes he would later paint.

Few artists have been so versatile. He has worked in oil and watercolor, made woodcuts and drawings, lithographs, silkscreens and sculptures. He is capable of presenting the human form in the most realistic of terms or creating an abstract landscape in which the forms are simplified, reduced to their elemental shapes. Whether painted in South Bend or the Yucatan, whether a bust of Christ or a portrait of one of his six children, whether a bold display of a Southwest geological wonder or fluid blend of African land and wildlife, Vogl’s art is a beautiful orchestration of form, rhythm, color and expression. And always a surprise — like the boldly stroked self-portrait, with its intensity and its strength, in contrast to the artist’s quiet, mild-mannered, unassuming personality.

When the Vogls’ children were younger, the family would load up the car and vacation out west. Even then Don would paint. His travels and art have since taken him to Portugal and France, Namibia, Morocco and the Yucatan. Just last year he logged more than 2,000 miles in the Atlas Mountains of Africa — in two weeks — and produced about 30 pastels. His is a large and impressive body of work, especially for one so devoted to family, for one who taught so well and so diligently, and now for a 74-year-old artist in retirement.

“For 40 years I had dreamed of being a full-time artist,” he told me over lunch the other day. “And now, with no sense or urgency, things are shaping up pretty well.” And with plenty of paintings stored in the Vogl’s South Bend home, there is no visible sign of any movement toward Sedona. Don and Colette made a deal.

Dean Porter is the director emeritus of Notre Dame’s Snite Museum of Art.