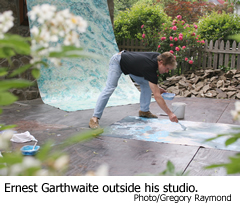 It was an opening at a New York City gallery in 1978. Ernest Garthwaite ’62 M.A. was exhibiting a series of paintings under the title Cree Skins. Unannounced, a native Cree in full tribal dress entered the room and began to dance. Chanting and swirling, his presence astonished the crowd, no one more so than Garthwaite himself. “I was completely surprised,” says Garthwaite, “and felt deeply honored by his ceremonial tribute.” The stranger left as mysteriously as he had arrived.

It was a validating moment for Garthwaite, whose paintings have been nourished by a lifelong personal and professional homage to Native American culture. His 2005 solo exhibition, The Taos Skins: Landscapes of the Red Willow People Spirit Land, reflects his respect for the people and place of the Taos Pueblo. It also continues a body of work that began in 1977 with Earth Skins and has included Alberta Skins, Saskatchewan Skins, Winnebago Skins and the Cree Skins series. The concept refers to the Plains Indian tradition of recording history on tanned buffalo hides.

Garthwaite traces this homage to his first art lesson at his father’s knee, a drawing of an Indian in profile. Cree lived nearby and traded with his father, a Saskatchewan wheat farmer. Garthwaite absorbed a sense of the sacredness of the land from them and from his father. His interest in Native Americans never ended. “I owe them the beginning of my artistic life,” he says.

Long after his father’s death, Garthwaite visited the homestead in upper Saskatchewan. He found there a faded sign, lettered by his father: Protect the Trees. “It was a moment which inspired my environmental philosophy,” says Garthwaite. Those early lessons on the plains of western Canada and his experiences of growing to adulthood in rural Wisconsin are now expressed as landscapes in luxurious paint. Understanding a place—recognizing its unique characteristics and communicating the sacred quality of its beauty and promise—is his mission.

As a graduate student at Notre Dame, Garthwaite was one of six students admitted to the class of sculptor Ivan Mestrovic. Even more than technique, he realized under Mestrovic the power and authenticity of emotion. “Life itself takes over, and life’s events are the basis for the work.”

Garthwaite began making liturgical work, including two commissions for the Regina Coeli Chapel of the Sisters of Charity in Dubuque, Iowa. When the convent dissolved 25 years later, Garthwaite reclaimed the statues and was surprised to find in those early pieces the personality and copper-gold coloration that have become the signature of his work. “It was both heartening and sustaining for me,” he says.

Although his metier became painting, his work retains a sense of sculptural understanding in both composition and process. He also continues a respect for tradition viewed with a contemporary outlook. His spiritual emphasis, like his medium, has both continued and been refined by the years, from liturgical subjects to racial struggles during the 1960s to environmental awareness. Cynthia Gibbons, director of Art Placement International, describes his work as “quiet and harmonious. It fits well in private as well as in corporate collections.”

Connecting with the land

Garthwaite connects with the land as an active participant. He enjoys running and will stop when and where the light compels him. Near his home and studio in Connecticut, Garthwaite kayaks the grassy inlets to better know “the land of water edges.” Copper pencil drawings, photos and plein air paintings secure a scene’s details and compositional sense. Garthwaite immerses himself in the place he has chosen, or “recognized” with some mysterious alchemy, then he goes into the studio “to produce what I’ve felt and seen.” He documents places that connect us with a legacy of stewardship, honoring this heritage through his painting and by supporting environmental and cultural organizations.

Garthwaite has always embraced the excitement of experimentation. Since the early 1970s he has employed shaped canvases to suggest the Native American presence in nature. Using basswood staves, he developed a stretcher that is bent and tied into a bow or sled shape. The cotton canvas fits over the top, recalling the concept of building and breaking down tepees or the taut pull of a bowstring. “It ties the image emotionally with the Native Americans who lived on the land.” The large paintings measure 8-by-10 feet and protrude several inches from the wall, blurring the distinction between painting and sculpture. Some are freestanding, balanced with restrained kinetic energy.

Each landscape begins with “spirit drawings” on the reverse. Sometimes the ink soaks through the canvas to create a ghost image under the landscape. Inspired by centuries-old photographic portraits, the image refers to both personal and general associations of relationship, stewardship and responsibility. These personages direct the power of Garthwaite’s endeavor. “It is like a prayer for me,” he says.

The painting itself begins flat on the studio floor, with creamy paint deeply staining the raw, wet canvas. He saturates the surface with abstract, gestural brushstrokes, building texture and light over several passages of paint. After this foundation is thoroughly dry, Garthwaite restarts the gradual building of the image. He likes the variety of light-refracting acrylic paints, later adding the subtlety of glazed and scumbled oil passages. The picture is augmented throughout with the application of 23-karat gold leaf, alluding to divination of the land. From more than four decades of teaching fine arts at City University of New York, he knows well the precise techniques for breathing the spirit of life into his paintings.

Garthwaite describes his artistic development from early realism to complete abstraction, finally arriving at a style that combines elements of both. “Over the years it was the movement of light on the canvas surface that was most important to me,” he says. Gallerist Sachi Wagner says, “The illumination of his surface texture is a very distinguishing feature of a Garthwaite landscape—the light changes on the surface. It is experiential to be with his art.”

Time figures in his work not only in terms of his own ageing, but in his process. “I build layers of paint and spend a lot of time on my paintings. I’ll leave a space between passages to work on another painting, and then return to it.” This accumulation gives depth and dimension to a painting. Isabella Trimper, president of Art Services International, says Garthwaite may take years on a painting. She adds that she often sells multiple paintings because clients are “transported to another dimension. They become not just spectators but participants.”

Garthwaite’s love of movement, both spatial and temporal, is also expressed in filmmaking and video, beginning in the late 1960s. In all of his films, the land and its cycle of seasons reflect our own lives and spiritual journeys.

His maturity as a painter is a key element in his work. “As an older painter, I’m a much better painter,” the 66-year-old says. “At my age I can synthesize all that I’ve learned, simplify and focus on the essentials.” His landscapes have verisimilitude—not a topographic reality but a sense of truth and beauty. “By seeking the anima that is sacred in the land as well as in us,” says Garthwaite, “we demonstrate our reverence for a universal spirit.”

Suzanne Smith Arney is a writer and arts educator living in Omaha, Nebraska.