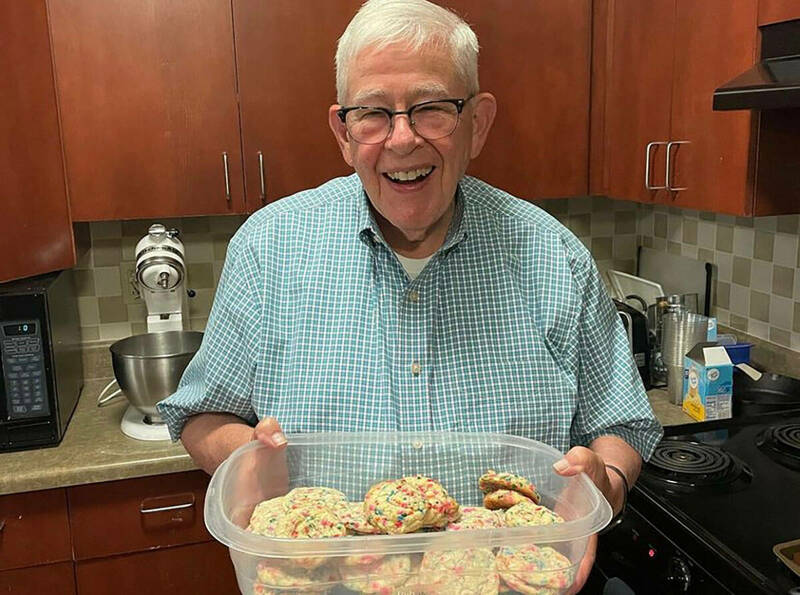 Father Joe Carey ’62 with his goodies. Photography by Emma Tamer ’22

Some people line the tops of their kitchen cupboards with wine bottles. Father Joe Carey, CSC, ’62 lines his with vanilla bottles.

They’re the jumbo, 32-ounce variety, and they are graffitied with the names of students who have lived and baked alongside him in Ryan Hall. FJ, as he is affectionately known by his 250 or so housemates, chooses a loyal baker to sign their name each time a vanilla bottle is used up. It’s a record of the dorm’s most beloved tradition, a visual reminder of the community that FJ has built in his little apartment for the past 13 years.

When FJ moved into Ryan Hall as the priest-in-residence at its opening in 2009, he had never baked cookies. By 2018, when I moved into the dorm as a nervous new student, he was a pro.

Every Tuesday, Ryan residents visit the priest’s apartment and bake. They churn out hundreds of cookies. Four KitchenAid stand mixers line the counters of his kitchen; big plastic storage bins of flour and sugar occupy one corner; the quantities of chocolate chips are not to be believed.

The smell of baking brownies and the buzz of happy voices drew me up to FJ’s apartment after my very first day of college classes. FJ already knew my name when I timidly poked my head in the door. I was overwhelmed by my first week at college and felt surrounded by strangers, but I found community in the warmth of his kitchen. I returned on as many Tuesdays as I could for the next four years.

Senior year, it was a weekly routine I cherished. After my last class, I headed to FJ’s room. Cake was in the oven and chocolate chip cookies were already well underway; FJ had just left work and changed from his Roman collar into a teddy-bear-brown fleece quarter zip. He looked up when I came in and smiled. “Grace!”

Taylor Swift hummed out of a speaker, FJ sat in his La-Z-Boy recliner, and a steady stream of students filled the apartment. Soon the whole dorm was fragrant with the scents of butter and sugar.

Shy bakers need not fear — if students come into his apartment uncertain of what to bake, FJ hands them a floury index card with a recipe.

“How about snickerdoodle?” he’ll suggest. Within moments, more experienced bakers help the newcomer find the cinnamon and jostle for a spot on the crowded counter.

In time, FJ associates people with recipes: one person for cake balls, another for blondies, someone else for double chocolate cookies. By senior year, FJ had me pegged as his blueberry scone baker — and planned accordingly.

“Grace, look in the fridge! I got you some blueberries,” he told me every week.

The refrigerator’s original color is nowhere to be seen beneath all the Christmas cards, wedding invitations and baby announcements that cover every inch of its surface. FJ is beloved by everyone who’s met him, it seems, and he pours that goodness right back into the world. His ministry is love, as he reminds Mass-goers every Sunday. No matter the Gospel reading, for FJ, it always leads back to the same question: “Did you love?”

One day at dorm Mass, FJ wrapped me in a big hug and said, “Peace, Gracie!” I was startled; he’d never called me that before.

“The Holy Spirit moved me,” he said with a twinkle in his eye. “Can I call you Gracie from now on?”

Since I was a resident assistant my senior year, I regularly passed by FJ’s room during evening rounds. Many a Monday night, I’d find FJ unloading vast quantities of baking ingredients from a giant blue moving cart. That’s how our evening visits began.

One night when I was on duty, I told FJ how much I’d miss him after I graduated.

“FJ!” I’d call from then on, halfway through a round.

He would tell me the latest priest gossip sometimes — “I get all the dirt” — or the story of his own vocation to Holy Cross. He told me stories of being a rector in the ’70s: keeping a safe full of cash in case he needed to bail a resident out of jail — “I’d bail you out, too” — and dealing with the Dillon boys’ weekend shenanigans. He’d tease me good-naturedly; I’d ask him for advice.

Writing my thesis and finishing my class readings could happen after final rounds, if need be. But spending time with FJ, most loving among priests, was the priority. His company was the biggest privilege and the greatest joy of living in Ryan as a senior, whether baking cookies or sharing a meal, praying together or gossiping together.

When FJ presented me with my own vanilla bottle, spring of my senior year, I was over the moon. “FJ! Now I can graduate happy!”

“I should hope so,” he chuckled, and we lined it up with the others atop his cabinet.

I’m in graduate school more than 2,000 miles across the country now, a displacement that makes me homesick for FJ and his apartment on Tuesday nights: the stories he told, the laughter we shared, the love he poured out with boundless generosity. But in my kitchen cabinet is a bottle of vanilla, ready to be called into action. It’s smaller than FJ’s, to be sure, but the sentiment is the same.

In this new place, I know it’s my turn to share what I can of the sweetness that sustained me at Notre Dame.

Grace Doerfler, a graduate student in the Stanford Journalism Program, grew up in Pittsburgh.