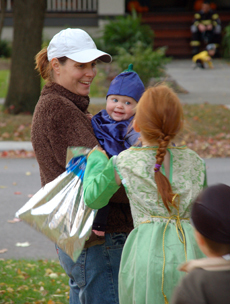 The Harvest Moon shines over the parking lot as I am walking into the grocery store, I stop in front of a display in the middle of the store and snarl at the fun-size candy bars, growl at the glow sticks and watch as bags of candy corn slowly empty onto the floor after I’ve slashed them open with the sharp edge of my bad attitude. When it comes to Halloween, I am more of a werewolf than a princess.

I moan about trick-or-treating and class parties. I gnash my teeth over baking dirt cupcakes with gummy worms shoved in the frosting. I howl over why we can’t just make costumes with the stuff we already own instead of buying new ones every year. And I think unchristian thoughts while making veggie skeletons with cauliflower brains, which I only make because I’m trying to bargain with the wellness committee so they back off the Gatorade machine. But part of being a parent is putting on a princess costume and being cheerful about cauliflower brains and other stuff you don’t like, so I try to be cheerful about Halloween.

Last year, because my life is full of exclamation points, my son threw up after the morning prayer at school. He then spent the day on the couch, just as sick as you would have to be if you were seven-years-old and it was Halloween and you had the office call your mom to take you home from school. When he begged to go trick-or-treating later in the day, I said, “Yeah, okay, I guess so, just don’t barf on me,” not because I was going for “Mom of the year” but because he was so upset about missing Halloween that I felt sorry for him. 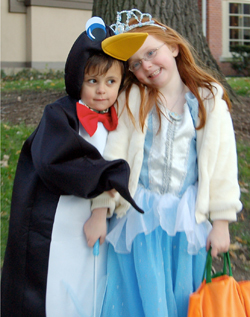 We limped through a couple blocks, and then it turned out that he was well enough to chastise the lady at 923.

I was apologizing for the lack of manners in both of my little monsters, the princess and the werewolf when my son started to feel nauseous and we quickly left so he wouldn’t barf on the raisin lady or her lawn.

With my son in bed upstairs feeling sorry for himself, my four-year-old and I passed out fun-size candy bars (which make no sense to me at all because full-size candy bars are a lot more fun). After the sun had set, the streets shading silent, and trick-or-treating hours almost done, I went inside to check on my sick kid. As I walked in his room I yelled down to my older daughter to, “Get that candy off the porch, before someone steals it!”

“Mom, they already did!”

My son whimpered, “This is the worst Halloween ever, I get sick and someone steals our candy.” 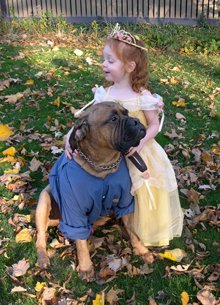 At this point I had reached my limit about being cheerful about something I don’t like. I’ve got my cheerful mom limits, and the coach was turning back into a pumpkin and the moon was full.

I decided that next year I’m gonna catch that candy-stealing kid. I’ll give every player on the high school football team who tackles him a hundred bucks and I’ll let them wait for him by hiding out on my front porch. Once the kid reads the sign that says, “Only take one, please” and then dumps the entire bowl in his pillowcase, the football team will go after him, tackle him and then I’ll stuff fun-size candy bars and cauliflower brains down his throat until he pukes.

He’ll apologize about a thousand times and he will never steal candy again. His mother will back me up and yell at him too and thank me for tackling her candy-stealing kid and everyone in my neighborhood will cheer and give me high-fives and talk about how that kid had it coming and the kid will thank me for the discipline and the football team will thank me for the money and everybody will be happy on Halloween.

But that will never happen. I’ll still bake the cupcakes, buy the fun-size candy bars and make the veggie skeleton. And I’ll try to be cheerful about it. At the end of the night when the trick-or-treating hours are almost done, I’ll put a bowl of raisins on the front porch with a sign “Only take one, please.” And I’m not going to care if some kid steals the entire bowl.

Maraya Steadman, who lives in a Chicago suburb, is a stay-at-home mother of three children. Her website is marayasteadman.com/. Email her at maraya@steadmans.org.