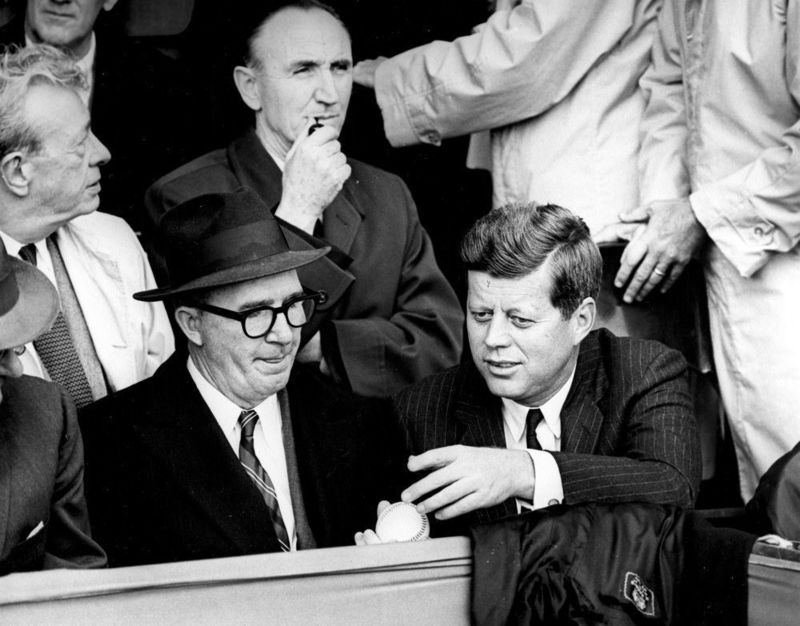 Kennedy knew Mansfield, behind the president smoking a pipe, would have his back in the Senate. (Abbie Rowe. White House Photographs. John F. Kennedy Presidential Library and Museum, Boston)

St. Patrick’s Day provides Irish Americans (and green-with-envy wannabes) annual justification to celebrate ethnic pride and peak experiences of their progress against the odds in the New World.

Leading most enumerations of historical success among those with ties to the Old Sod and her Four Green Fields is the 1960 White House election of John F. Kennedy.

Looking back and remembering what happened that year, it seemed America was turning a page and beginning a new chapter in her nearly 200-year history.

Most of all, there was the shock of the new. Kennedy’s victory meant the U.S. would have its first president born in the 20th century, and — at 43 — the youngest person elected to the nation’s highest office. He’d also be the first Catholic to occupy the White House, and the first (and to this day only) president who received a Pulitzer Prize.

Author Theodore H. White captured this moment better than anyone, when he concluded the first chapter of his classic, The Making of the President 1960, by saying JFK “had somehow stirred every nerve end of the American political system, and that system would never be the same.”

Neither would the culture and society of the United States.

Significant as 1960 was and continues to be, the next two years also deserve recognition for events that contributed to this country’s political history and the Irish American experience.

On that cold January 20 in 1961, Kennedy used his inaugural address to define the time. Several sentences he spoke soared, in particular one that began: “Let the word go forth from this time and place, to friend and foe alike, that the torch has been passed to a new generation of Americans . . .”

After eight years in the hands of Dwight D. Eisenhower and the Republicans, the torch of White House leadership now belonged to Kennedy and a Democratic administration. Yet executive-branch authority was just one dimension to the power-shifting taking place in Washington 60 years ago.

Up on Capitol Hill, Mike Mansfield — son of two immigrants from Ireland — had been sworn in as Senate Majority Leader 17 days before JFK, and one year later John McCormack — described by one observer as “the very model of the cigar chewing big-city Irish politician” — was elected Speaker of the House of Representatives.

Between January 3, 1961 and January 10, 1962, the highest executive office nationally and the two most important leadership positions in Congress had become occupied by Irish Americans, and in each case they were the first Catholics to hold those offices.

Throughout 1962 and until an assassin ended the Kennedy presidency in Dallas on November 22, 1963, this trinity of Washington power could look across the Atlantic at a heritage of forebears. In JFK’s case, his eight great-grandparents migrated to Boston in the 19th century.

Each lawmaker had a strong relationship to Kennedy, but his death didn’t alter their positions in the Congressional chambers they led. Mansfield served as Senate majority leader for a record 16 years (until 1977), and McCormack controlled the Speaker’s gavel for nine years (until 1971).

JFK was personally responsible for Mansfield moving up from Senate whip to leader, when Lyndon Johnson became Kennedy’s running mate and then vice president.

In the book “Johnny, We Hardly Knew Ye,” Kenneth O’Donnell, a principal Kennedy aide, recalled his anger at the presidential candidate for selecting Johnson, the Senate Majority leader from Texas, to be on the ticket. Kennedy, however, vigorously defended himself.

“I’m 43-years-old, and I’m the healthiest candidate for President in the United States,” Kennedy explained. “You’ve traveled with me enough to know that. I’m not going to die in office. So the Vice-Presidency doesn’t mean anything. I’m thinking of something else, the leadership in the Senate. If we win, it will be by a small margin and I won’t be able to live with Lyndon Johnson as the leader of a small majority in the Senate. Did it occur to you that if Lyndon becomes the Vice-President, I’ll have Mike Mansfield as the leader in the Senate, somebody I can trust and depend on?”

So many years later that quotation still makes a reader pause and do a double-take.

In McCormack’s case, he was a Bostonian as JFK was, and he represented a Massachusetts U.S. House district in Washington for an astonishing 43 years. He was Kennedy’s choice to be the 1960 convention floor manager, proving critical in convincing Johnson to accept the No. 2 spot for the Democrats.

What’s fascinating when you study the lives of these three men is that each engaged in a certain amount of deception or deliberate self-invention to advance themselves, particularly in their public work and service.

Mansfield’s act of personal modification involves lying, but it’s a commendatory form of mendacity. He dropped out of the eighth grade and falsified his birth certificate to enlist in the Navy to serve in World War I.

Just 14 at the time, he was four years younger than the requirement of the National Defense Act of 1916. He also wasn’t exactly a strapping sailor. Don Oberdorfer in Senator Mansfield reports that the 14-year-old was “five feet four inches tall and weighed 122 pounds” when he became an apprentice seaman on February 23, 1918.

For McCormack, his “Irishness” — someone deeply rooted in the turf of Eire — came into dispute with the passage of time. Though he claimed both his father and mother were born in Ireland, this, alas, was an invented identity. His father was actually born in Canada to a family of Scottish background, and his mother’s parents, who were native-born Irish, had emigrated to the U.S. before she was born.

Garrison Nelson’s meticulous biography, John William McCormack, which appeared in 2017 — 37 years after the former’s Speaker’s death — sorts out the facts of McCormack’s upbringing early in its 910 pages. Nelson writes that “the reconstruction of his [McCormack’s] life” could “explain his lifelong resistance to prying reporters and biographers.”

For Kennedy, the self-fabrication comes later in his career but proves critical for his national reputation and stature. A number of books, most recently Craig Fehrman’s Author in Chief, document that the young, ambitious senator from Massachusetts didn’t have all that much to do with the writing of the hugely successful book Profiles in Courage, published early in 1956.

For a relatively unknown senator without an extensive record for crafting legislation, going around the country to promote a best-selling book brought media attention and helped dramatize his seriousness to the public.

What these three figures have in common is a hunger for public service and a willingness to engage in fictitious self-presentation along the way to arrive at future goals. In each case, too, this trio became pathbreakers — with Catholic Irish Americans later serving in all the positions they occupied.

On this St. Patrick’s Day and 60 years after he was inaugurated president, John Kennedy justifiably receives credit for bringing Irish Americans, once and for all, into the mainstream of national life. But he wasn’t alone. Mike Mansfield and John McCormack were right there with him, contributing to the march — let’s say parade — of American history.

Bob Schmuhl is the Walter H. Annenberg-Edmund P. Joyce Professor Emeritus of American Studies and Journalism at Notre Dame. His most recent book is The Glory and the Burden: The American Presidency from FDR to Trump (Notre Dame Press). His essay “The Legacy of a Thousand Days” appears in the collection, From Whence I Came: The Kennedy Legacy, Ireland and America, just published by Merrion Press in Ireland.