“The show can’t go on without you,” proclaims the poster for Blank! The Musical.

Though Blank! opened at New World Stages, a theater less than half a mile from the lights of Broadway, it isn’t your typical musical — and not just because it is all improvised. It’s not even your typical improv show. 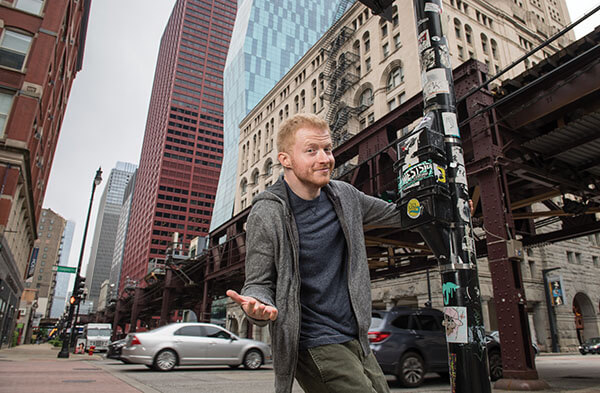 For Michael Girts, improv means lending a hand to others. Photo by Barbara Johnston.

Most improv performances require some sort of audience participation: yelling out a person, place or thing to give the performers a starting point. In those situations, it’s usually the loudest person who is heard and who defines the direction of that night’s show.

But not at Blank!, billed as an unscripted, interactive piece of musical theater. Blank! uses a mobile app that allows all members of the audience to participate. It’s the democratization of improv, says show creator Michael Girts ’07MBA.

“The audience votes on what they want to see, using the app,” Girts says. “So, together, they choose the title of the show, some of the songs that will be invented within the show. They even help compose the musical score, vote on a dance move,” and so on. The voting runs on a screen on stage, in real time, for the audience to follow along.

Audiences have suggested topics from online dating (featuring a song titled “Tinderella”) to gluten allergies (“Wheat is the Devil” was one of the musical numbers in that one) to boy bands (“Directing One Direction the Musical”).

Blank! had a critically acclaimed run at New World Stages in 2014, earning a rave review in The New York Times as well as attention from CNBC and tech website The Daily Dot. There was a special one-night-only performance on May 2nd at The Broadway Comedy Club in New York City, as a celebration of that day’s Tony Awards nomination announcements. And this month, Girts is taking the stage himself when Blank! is the headlining act at Florida’s Sarasota Improv Festival.

“Ultimately, this was his brainchild and the culmination of years and years of working in the improvisation and musical improvisation world,” says Mike Descoteaux, the artistic director at ImprovBoston, a nonprofit theater, and one of Girts’ collaborators on Blank! The Musical.

Girts got his start in improv while he was a business student at Notre Dame, making the 90-minute drive to Chicago’s The Second City, a renowned improv theater and school with alumni the likes of Stephen Colbert, Steve Carell and Tina Fey, to take beginner improv classes.

Wearing multiple hats — like he does as a co-creator and performer in Blank! — is a way of life for Girts, who combines business acumen with a passion for theater and performing.

“For as long as I can remember, I’ve thought, ‘I’m just going to keep doing both until I can’t do both anymore,’ and I’m 33 years old and I still do both,” says Girts, who moved to Chicago after receiving his master’s degree from Notre Dame.

By day, he works in the marketing world, leading pitching and prospecting efforts for VSA Partners as their head of business development. Girts likens it to a stage manager role and says he couldn’t do it without his background in theater and improv.

In his spare time, Girts works on projects like Blank! and Mansical — which he calls “the world’s only all-male, all-musical, all-handsome improv show” — a production he performs with a group of friends at theaters in Chicago. He still maintains his relationship with Second City, where he teaches and performs, and facilitates workshops with Second City Works.

“The most important thing I’ve gotten out of improv is the process of getting there — less what you make but the how you make it,” Girts says. “It is all about an ensemble mindset, listening actively to your scene partner, focusing on others rather than yourself, taking risks, and rewarding the risks that other people take by accepting it and adding to it, which is what we call ‘yes, and.’ I’ve found that applicable to all parts of life.”

This is what he shares during the Second City Works lessons, which use the principles of improv to help groups with communication and presentation skills. And it is what has developed Girts’ own mindset as a manager, which he refers to as servant leadership, or leading from behind.

“I want everyone on my team to be subject to one another, to ask, ‘What can I do to help my teammates be better today?’” he says. “I learned that from improv, and it’s been crucial in my business career as well.”

Amanda Kost, who worked for Girts while he was a director at Leo Burnett, says he epitomizes servant leadership.

This ability to meld improv philosophies with business makes Girts a “unicorn in the world of comedy,” says Descoteaux, who once taught Girts at Second City.

“Typically, the folks who are more analytical or management-oriented don’t make great improvisers, because they are disconnected from the emotional or intuitive side. On the other side of the spectrum, improvisers who are pure emotional or physical beings have a hard time doing what Michael does off stage, which is producing, directing, keeping the train on the tracks,” Descoteaux says. “He hears the concerns of the cast and finds supportive, collaborative ways to address them.”

For Girts, this is the key to improv, taking care of your fellow performers on stage. He brings this approach to all facets of his life, to the advertising executives he manages, the improv students he teaches, and the corporate teams he coaches in his workshops.

Girts says the same thing to every improv group he leads, whose members are often nervous or scared: “While you are in here, you do not have a responsibility to be funny, to be interesting, to be good. Your only responsibility is to take care of the person to the left and to the right of you.”

That has to be taught, Girts says, “because biologically, we are self-interested. Improv reminds me all the time, ‘What can you do for the people around you?’”

Not only is it a personal reminder, but it is one Girts feels is imperative to share with the people around him. “When you’re scared, when you feel risk or fear, it’s all about, ‘What will happen to me?’ To flip that human instinct and say, ‘It’s not about you right now, what do they need?’ that has been a tremendous life thing for me,” he says.

Maura Sullivan Hill is a writer and editor living in Chicago. She was an intern for this magazine in the fall of 2010 and has also written for Loyola Magazine, Holy Cross Magazine and the Scranton Journal.