“Have you found it yet?” my friend, Emily, said as we weaved our way through the leaves and branches on God Quad.

“Which rock did they say it was again?”

“The big rock on God Quad.”

“There are a million big rocks on God Quad.”

Then, we saw them: a cluster of red Solo cups filled to the brim with beer. They were for the final senior toast at midnight, when we gathered with our classmates to run up Main Building’s steps, which tradition had prevented us from doing until now.

For two of my friends who pushed the boundaries of the university-sanctioned event, the festivities began with a small scuffle with NDSP. Beer, it turns out, was fine for these of-age students, but the entire keg of it they’d dragged onto God Quad was not. Told to remove the offending keg or face the consequences, they poured what remained into a dozen Solo cups and rushed to dispose of the metal vessel, leaving us vague directions to a rock that sheltered its distributed contents. 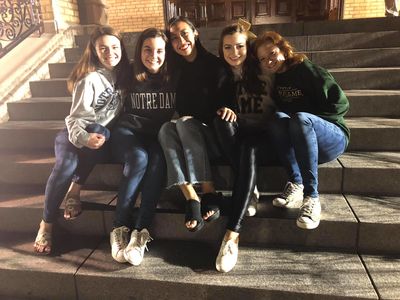 Our search for the Solo cups encapsulated so many feelings of Senior Week. A sense of invincibility — I trudged through the grass on God Quad, able to ignore at last the campus superstition that to step on it risked academic failure. A sense of frugality — Senior Week drained our funds to the point that we wouldn’t even let leftover, warm beer go to waste. And a sense of nostalgic joviality — here we were, college graduates, society’s newest investment bankers, analysts and teachers, turning over mulch and shrubbery with the giddy adrenaline of freshmen who could be caught at any second.

For those few days, we were invincible. On a storm-tossed boat on Lake Michigan during our senior party, the waves challenged our balance on the dance floor, but not our mood. Under gray skies that broke right after the Commencement festivities ended, the rain that pattered down on us only reinforced our happiness that the inclement weather didn’t force us to an indoor backup venue instead of our beloved stadium.

We were frugal. . . .to whatever extent possible when costs and priceless memories conflict. Not wanting to miss a second of my limited time left with my class, I splurged on a $60 Cubs game excursion to Chicago despite my incompetence at following baseball. Throughout the week, other, smaller expenses — the $7 class picnic, Ubers around town — added up too. The price of nostalgia.

Of all of them, though, no cost felt more extravagant, or essential, than the Stole of Gratitude. To be draped over our gowns at graduation, the garment was optional — unless you loved your parents. The traditional purpose of the stole, originating from a legend about an orphaned boy in pre-medieval Europe whose only possession was a strip of fabric from his mother’s clothes, is to thank those who made your education possible.

I rolled my eyes at this effort to cash in on my guilt, but surrendered out of fear of my mom’s hurt feelings. Buying my cap and gown had depleted what was left of my account, however, so I sheepishly asked my mom to pay for the stole herself, promising to Venmo my gratitude to her two days later when I received my paycheck.

And through it all, we were nostalgic and jovial, reminiscing one minute, not quite believing we were graduating the next. Despite our Commencement speaker’s sentimental words and our discussion of everyone’s postgrad plans, I still felt like we would all reconvene in South Bend in August.

The reality hit me when I smiled and said goodbye to people who were not quite my friends, but whose presence I had taken a comfort in, whose daily routines somehow overlapped with mine. The people I would pass on the sidewalk on the way to class every Tuesday and Thursday with nothing but a smile or hello exchanged, a friend of a friend, but my companions on this journey, people who reminded me of the quiet yet omnipresent solidarity I discovered at Notre Dame.

It hit me when my best friends and I returned to Breen-Phillips Hall to say goodbye to our personal microcosm of Notre Dame. It hit me in the dorm where we all met as I sat next to my best friend and realized that, from now on, a flight would be necessary to see her instead of just a barefoot walk across the hall.

And it hit me standing for the first time atop the steps of Main Building, taking in a strange new view of a place I’d known for four years. Maybe this is why they don’t let us up here until we graduate, I thought, to turn something familiar into something new. Maybe superstitions rendered certain things exclusive to alumni so that your four years ended not with a period, but with an ellipsis, leaving you wondering what else you might have missed.

Selena Ponio is preparing to enter the “real world" in July when she moves to New York to work as junior analyst in securities finance on Wall Street.