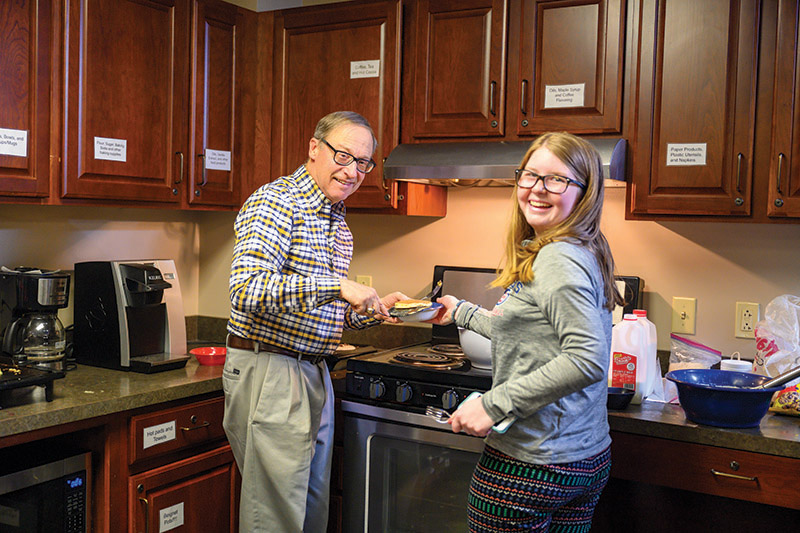 It’s Tuesday night of December finals week, and the residence hall is deadly quiet as students prepare for the next day’s exams.

At 9 p.m., Lyons residents begin to arrive in a trickle, which soon swells to a flood. The silence turns into a cacophony of greetings and chatter about finals. Music pounds from a sound system as the early line for pancakes extends to the room’s entrance.

Ed Hums ’75, a teaching professor of accountancy, expertly flips pancakes as his wife, Shirley ’97MNA, who works in IT support at the Joyce Center, pours the batter in uniform circles to create chocolate-chip or blueberry treats.

For the Humses, participating in dorm events is part of daily life. This is their seventh year as Lions — residents of Lyons Hall, an undergraduate women’s dorm. Their spartan two-bedroom, one-bath apartment is on the first floor, just northeast of the Lyons arch.

Notre Dame’s faculty-in-residence program, started in 2013, aims to help bridge the gap between academic and student life. The Humses are friends, mentors and role models for the hall residents. They consider it a ministry.

To Lyons residents, Ed is “Prof” and Shirley is “Saint Shirley,” a nickname students coined years ago. The couple exhibits endless patience and good humor with their young neighbors. They chat with the students between pancake flips, asking how exams are going, how their parents are and when they’ll be leaving for Christmas break.

They’ve hosted trivia contests, dressed as Santa and Mrs. Claus to judge the hall’s holiday decorations competition and overseen ice cream socials. They attend hall dances. Shirley makes cookies for the residents, who sometimes come to the Humses’ apartment to bake and chat with them.

Having a faculty couple in residence makes the hall feel more like a home, the young women say. “We love it. It’s like having an extra set of parents,” says junior Julie Rosta.

Junior Irene Newman has also been a student in one of Ed Hums’ accounting classes. She says he is an engaging professor who gives proud shout-outs to fellow Lions in class and even attended one of her hockey games.

Shirley and Ed “are family for the hall,” junior Courtney Sauder says. “They care about you. I love them very much.”

Lyons’ oldest residents visit with their hallmates in the common room, cross paths with them in the laundry room and attend Mass each Sunday in the hall chapel. Ed occasionally hosts “Club Lyons,” inviting accounting students to the couple’s apartment for study sessions and snacks.

Ed grew up in Mishawaka. As an undergraduate, he lived at home, so the faculty-in-residence program is his first experience of residence-hall life. “It can be a little noisy sometimes,” he says with a good-natured shrug.

“When I was an undergraduate, we mixed nicely with the faculty because it was a smaller institution,” he says. As the campus has grown, “that opportunity to see your professors on a regular basis doesn’t happen.”

He was approached by the Division of Student Affairs and asked if he and Shirley would consider moving into a dorm. He liked the idea. “It was an opportunity to integrate faculty and get faculty more involved in student life,” he says.

“We decided to take a chance and see how it worked out. And it worked out well,” Shirley says. “We’ve always felt an integral part of the whole campus, but we really feel a big part of Lyons Hall.”

“It’s worked out great. We love being here,” Ed adds.

When the couple moved to campus, they kept their Mishawaka home. But they live on campus year-round, only staying at their house during Christmas break.

The Humses, who have no children, will mark 40 years of marriage in April. They’ll celebrate at Lyons, with a special blessing in the chapel and ice cream and cake afterwards.

Lyons rector Kayla August considers the dorm fortunate to have a faculty couple in residence. They provide the students with love and guidance, she says. “It gives Lyons more of a family appeal to have them here.”

It’s intended to build on Notre Dame’s long-standing priest-in-residence program. About 26 of Notre Dame’s 31 dorms are home to a priest, typically a Holy Cross priest on the faculty. “We wondered what it would be like to expand that to lay people,” Russell says of the program’s start.

Extending the program to additional residence halls is limited by the number of available apartments. Top priority for dorm apartments goes first to rectors, then to priests. If there’s an extra apartment, the hall can be considered for a faculty member in residence. As older halls undergo major renovations, an apartment may be added if space allows, Russell says.

Faculty members living in residence halls have no administrative or disciplinary duties. The couples are “different from hall staff, but complementary,” Russell says. The main goal is for them to share the students’ academic and life experiences, and help build community.

University leaders are pleased with the results so far. “These are real people with life stories and wisdom to share, who are role models,” Russell says.

Professors live in residence halls at many other universities, including Yale, Vanderbilt and Duke. Notre Dame is developing its own take on that custom. Here, the couples live in the dorms rent-free and receive campus meal plans. They often eat meals among, and sometimes with, undergraduates in the dining halls.

The program is in some ways a reboot of Notre Dame’s old tradition of bachelor dons: unmarried, lay male faculty who lived (some for decades) in student residence halls. Paul Fenlon, the last bachelor don, died in 1980.

In this modern incarnation, the dorm dwellers are married couples. (In both current cases, one spouse is a professor and the other is a staff member, although Russell says faculty status is not mandatory to be considered for the program.)

John and Karen Deak live in a two-bedroom apartment in Dunne Hall, a men’s residence hall on campus’ northeastern corner. They moved there in 2016, the year the dorm opened.

The Deaks have established their own traditions and ways of connecting with residents. Initially, Dunne men were wary of having two additional adult employees in-house. “We didn’t really fit into their idea of what belongs in a dorm immediately. But a lot of them came around,” says John, a history professor.

When the couple agreed to join the faculty-in-residence program, it prompted a dramatic lifestyle change. They were living in a house they owned in South Bend. “We sold the house and gave away all our furniture to either charity or friends. We got rid of all our stuff,” John says.

Karen, the director of academic advancement for research innovation and Notre Dame’s Idea Center, was eager for the change. “I was having progressively less contact with students and never very much interaction with undergrads,” she says.

The Deaks prefer to be called by their first names, but some students can’t bring themselves to do that. The pair, who have no children, want to be viewed as just two more residents in the dorm. “I characterize us as the fun aunt and uncle in the residence hall,” Karen says.

The Deaks had previous experience with life among undergraduates. While studying for their doctoral degrees at the University of Chicago, they lived and served for three years as resident heads, a role similar to that of Notre Dame’s rectors.

They love being full-time campus residents. “I come home to the heart of the place in a way that I know my colleagues don’t,” Karen says.

On a Tuesday evening in January, dozens of Dunne men have turned out in the first-floor common space to learn business etiquette and table manners. The Deaks organize the annual event.

John, wearing a tie and apron, stands behind a table making alcohol-free “mocktails” to order. Karen steers the young men to a buffet line featuring eggplant parmesan and salad.

Although lighthearted, the event has the important goal of preparing the students with social skills for job interviews, business dinners and other events in the working world. As the students mingle and sip their mocktails, guest speakers offer tutorials on proper behavior at formal gatherings: How to introduce yourself, offer a firm handshake and make small talk.

Senior Mark Fedoronko likes having a married couple in the hall. “They are great to go to for advice and help,” he says. He recalls a chance conversation he had sophomore year with John Deak in the dining hall. The moment convinced him to look beyond the daily challenges of an internship he had at the time and to focus instead on the big picture. The Deaks “are an integral part that makes Dunne better than the average dorm,” he says.

The couple attends the hall Mass each Sunday and joins residents in watching movies and basketball games in Dunne’s lounge. They invite small groups of their neighbors for a home-cooked meal and conversation in their apartment. John organizes video game tournaments, and Karen supervises the dorm’s food sales operation, which funds an annual faith retreat.

The events aren’t just a break from studying. They provide an opportunity for Dunne residents to talk with the couple, share successes and worries and put their lives in perspective.

When freshman Jake Abel moved into Dunne, the Deaks were among the first people he met. Abel grew up in a small town in upstate New York and says he doesn’t have much experience interacting with married couples. “I can’t name one of my friends whose parents stayed together,” he says. “It’s nice to have role models.”

Abel observes how the Deaks interact, and how John treats his wife with care and tenderness. He finds that helpful in developing healthy friendships with his female peers.

Just as the three Holy Cross men demonstrate their religious vocations, Kuczora says, the Deaks demonstrate their vocation as a married couple, adding a fruitful dimension to hall life that otherwise wouldn’t be there.

As the only woman in the dorm, Karen was adamant the first two years that she would not cook or bake for the hall residents. She didn’t want to model traditional gender-role stereotypes. She now occasionally bakes cookies to share in Dunne’s common space. “I still have mixed feelings about it,” she admits.

Living among students has its comical moments. “If it’s loud, we listen to what they’re singing. We don’t put on noise-canceling headphones,” John says. “When the residents in the room above you are blaring Julio Iglesias music at 2 in the morning and singing along, when you see them the next day, you say, ‘You were hitting the high notes to Julio,’” he adds with a smile.

“The students realize that we accept them for who they are. We don’t just want them when they’re perfect angels in the study room,” he says.

There are challenges, of course. “We’re doing something that’s fairly new. There is no playbook. You have to experiment and try things.”

Ed and Shirley Hums have learned similar lessons during their years in Lyons. They’ve seen several classes of women grow from freshmen to graduating seniors and beyond. “We are very blessed to be part of this ministry in Lyons Hall,” Shirley says.

Her husband echoes that sentiment: “This does feel like home now.”