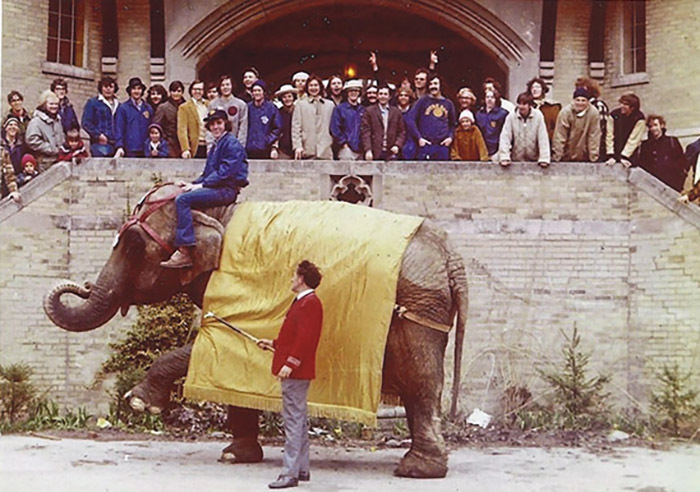 The author aboard Babe as fellow Lyons Hall residents celebrate their triumph. Photography by Robert Lane ’72

I remember it as a typical overcast day sometime in February 1972. We were sitting around in our quad on the third floor of Lyons Hall, looking forward to the eventual return of warmer weather, when somebody mentioned an annual lighthearted spring festival called An Tóstal. It sounded like fun.

One of the planned events was a tug of war at the festival mud pits. Each residence hall could sign up 10 people to represent it in the competition. We had only one varsity football player in Lyons — we weren’t the most athletic of dorms.

We could only imagine the team a hall like Dillon would enter. Prospects weren’t looking too good for the men of Lyons.

As we brainstormed our problem, an idea arose. A television commercial at the time featured a driver behind the wheel of a Buick-Opel trying to pull a live elephant across a stage.

I recall my roommate, Tom Matthews ’76, saying: “Wait a minute. . . . Maybe we could enter an elephant to represent Lyons Hall!”

I remember calling Brookfield Zoo near Chicago the next day and asking if by chance they rented out their elephants. They did not, of course. But the person on the phone told me about a business called Animal Kingdom, based in Peru, Indiana, that might be able to help me.

I called the Indiana number and talked to a gentleman whose name I remember as Franz. He said he had an elephant. I explained our predicament. I stressed that there was a chance that 10 Notre Dame football-type athletes might be trying to pull his pachyderm into a 10-by-15-foot mud pit. We did not want to proceed if there was a chance the elephant could be hurt — or worse, LOSE.

I remember Franz chuckling and telling me that he would bring Babe, a powerful and spirited elephant he relied upon when asked to pull tractor-trailers out of ditches.

Babe was our girl!

Then it was time to see if the An Tóstal committee would allow an elephant to enter the tug of war. The committee members basically said it would be allowed.

Next: Would our hallmates back us up financially? We needed about $300 to rent the elephant. Lyons residents responded enthusiastically, to the point where only about $1.50 per person was needed.

And third: We needed to keep our entry a secret. Advance publicity might discourage other halls from entering the competition.

All three of these conditions were met. Game on!

Saturday, April 22, 1972 was a partly sunny day, the third and final day of the festival. I received a phone call around 8:30 a.m. from a security guard at the University’s main gate. No vehicles were allowed on campus without permission. The guard informed me of a tractor-trailer driver who was asking how to get to Lyons Hall.

I told the guard that the truck contained supplies we needed to unload. Fortunately, that was good enough. Babe was on her way.

We were excited and a bit anxious to meet her. We went to the Lyons’ parking lot and watched the truck pull in. Franz, the driver and trainer, jumped out and introduced himself. He was decked out in a red, circus-type jacket and carried an elephant “training stick” of some sort. He walked to the back of the trailer and opened the doors.

We stood there in awe, looking at Babe. She was big, beautiful and looking down at us just as calm as could be.

Franz signaled Babe with the stick, and she majestically stepped from the trailer onto the parking lot. By now, most Lyons residents had come out to see the elephant and join in the parade across campus. Someone draped two bedsheets over Babe, with “Lyons” spray-painted on each one.

The march to the mud pits started on South Quad. Franz led Babe using only the training stick and an occasional gentle verbal command. Many Lyons Hall men followed proudly along. Walking past other dorms, I remember windows opening and passersby gaping — wondering what the heck was going on.

We turned north near Walsh Hall and headed toward the Main Building when Babe decided to relieve herself of her digested breakfast, to the crowd’s delight. We borrowed a couple of large shovels from maintenance the next day to clean that up.

We turned again near Sacred Heart Church and headed for the mud pits that were located in a field along Saint Mary’s Road between Notre Dame and Saint Mary’s College.

Once we arrived, Franz got to work. He put a harness on Babe that wrapped around her body with a hook at her back end for the tug-of-war rope. Lyons Hall had garnered a bye, then headed to the finals to face off against powerful Dillon Hall. Quite a crowd had gathered to witness the contest.

Franz tied the rope to Babe’s harness as she faced away from the mud pit. The rope was then tossed over the pit to the 10 warriors from Dillon.

Little did we know that in addition to being an elephant trainer, Franz possessed a bit of the circus performer in his soul. A whistle blew, and the competition started.

The rope grew taut as the Dillon boys began to pull. Babe didn’t move until I heard Franz whisper in her ear: “Back, Babe.”

Babe took one large step back toward the pit then stopped, as if she was posing. The Dillon gang thought they were making progress, and they exerted even more effort. But Babe was not moving. To my surprise, Franz whispered in her ear again: “Back, Babe.”

I got concerned when Babe took another step backward, putting one foot on the edge of the pit. Again she struck her pose.

The Dillon crew was now fully extended, to at least a 150-degree angle. Veins were popping from necks, muscles were straining, the groans of expected victory were heard.

It was then Franz raised his training stick to Babe’s shoulder and commanded sternly: “GO, Babe!”

Babe raised her trunk high and let out a loud and unforgettable trumpeting sound. She charged forward with such a lurch that the first man of the Dillon crew just about flew across the pit.

Babe had done it. Lyons Hall won the An Tóstal tug of war. Cheers rang out from the crowd.

Accompanying Babe, we marched back to the hall in triumph. And Franz had one more surprise for us before loading Babe into the trailer for their ride home. He approached me in the parking lot and said, “Just follow my instructions.” He called Babe over and said, “Down, Babe.” Babe proceeded to bow down and extend her trunk across the pavement. Franz then told me to grab the handle of the harness on Babe’s forehead and place my right foot onto the crown of her trunk.

The instant my foot touched her trunk, Babe stood up and raised it above her head, dumping me onto her back for a photo-op. The men of Lyons lined up to pose for a photo with Babe.

It was quite the farewell to Franz and Babe, after one of the greatest upsets in An Tóstal tug-of-war history.

Carl “Jim” Sherer is retired and lives in Milwaukee.