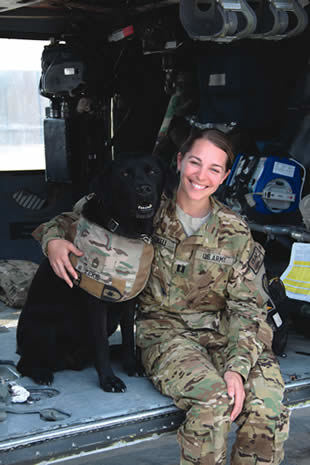 Hayden Piscal Howell is cut from the same Army-green cloth as her father.

Howell ’08 moved among seven states during her “Army brat” childhood. At each stop she brought along a horse named Pebbles, a fascination with the camaraderie of military life and a deep respect for her father, Army Colonel Richard Piscal.

Retired First Sergeant Kurt Wood, who was the senior ROTC military instructor at Notre Dame during Howell’s college years, says she and her father are both the type to be in charge and make things happen. “I would imagine everything she did she looked back to see if it was good enough for her daddy,” and therefore good enough for her, says Wood, who watched the colonel swear in his daughter as an officer at the Grotto.

“He’s always the voice in the back of my head,” Howell says. “I don’t know anyone who has a more straight-and-narrow moral compass.”

Now Howell is taking what she has learned from her father, ROTC and flight school and applying it as a medevac pilot in Afghanistan, scanning the mountains and desert from the cockpit of a Blackhawk helicopter, looking for enemies who might bring her mission crashing to the ground.

“I get to serve my country being in the Army, but even more so I get to serve my fellow soldiers as a medevac pilot,” Captain Howell said during a Skype conversation from her spare bunk bed in Afghanistan.

After being deployed for the first time in January, one of her earliest missions brought her face-to-face with wartime reality when she had to pick up a U.S. soldier whose legs had been destroyed. “I hadn’t planned to look back there because I’m not big on blood and guts,” she says of her patient. But as she scanned the area for threats before takeoff, she caught a glimpse of the legless man. “It was heart-wrenching.”

Howell, 26, says she doesn’t worry much in the middle of a mission because she’s so focused on getting the patient delivered to the hospital. At other times, however, she does worry about her husband, Army Captain Andrew Howell, a Kiowa pilot she met in flight school. He’s on his second deployment and is at the same Kandahar Province location as his wife. Armed helicopters accompany Hayden Howell’s chopper when there’s a chance of enemy fire. Her husband piloted one of the Kiowas alongside her helicopter on one of her missions.

She shares a room with her college mentor, Captain Margaret Larson ’06, who also is a pilot in the medevac company attached to the 25th Combat Aviation Brigade. The base is not set up for Howell to share a room with her husband, but she tries to eat lunch or dinner with him.

“We may not get a lot of time together, but we get to see each other every day and that makes a big difference in my morale,” says Howell.

Larson says Howell has learned a lot during the deployment but had a head start because she came already knowing she wanted to be “a leader just like her dad, who got her hands dirty, endured challenges alongside her soldiers and gained their respect.”

Her job involves 50-hour shifts waiting for emergency calls. She fills in the waiting time working as a platoon leader in charge of about 25 troops — from pilots to medics to crew chiefs.

Leadership is her favorite part of the job, which surprises no one who knows her. Family and friends describe her as strong-willed, competitive, focused on the well-being of the people around her, and so self-confident that she told her first-grade teacher she wasn’t answering questions in class because she knew all the answers and wanted to give other kids the chance.

Howell was self-assured enough as a high school senior to apply to only one school — Notre Dame. Her mother, Theresa Piscal, says her husband wasn’t so sure about Howell following him into the Army, but warmed to the idea. Their daughter took less time. “It was an automatic, ‘This is what I want to do with my life,’” she says of joining ROTC.

And Piscal knew her oldest child had made the right choice when Howell came across a rope bridge at the start of ROTC orientation wearing her new uniform and a gigantic grin. “She was absolutely hooked.”

Notre Dame provided Howell with her first chance to live in the same place for four years. And to nourish her love of animals as part of the Equestrian Team.

Howell had fallen in love with horses during a visit to the farm of family friends in Louisiana. When the grade school girl burst into tears of delight on meeting the eight horses, the friends bought her Pebbles. Howell baled hay and worked around the farm to pay the family back, building up her physical strength and courage, her mother says.

The ND equestrians called Howell — 5-foot-5 and 125 pounds — the team bodyguard because of her strength, says her best friend and fellow equestrian Katie Baron ’07. But Baron says she’s also the little angel girl in childhood pictures with Pebbles.

“Hayden is both of those things, and that’s what makes her so special,” says Baron, who is in Chicago working on a master’s degree in social work. “She’s the big tough military person, braver than any of my other friends. But she’s also so kind and would do anything for you.”

Tamara Lytle is a freelance writer in the Washington, D.C., area who has written for U.S. News and World Report, AARP Bulletin and various alumni publications.