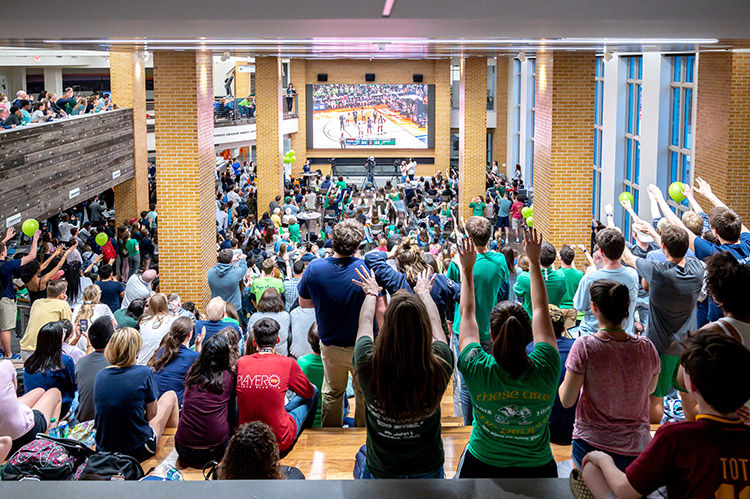 On Sunday night, April 7, students, staff and Notre Dame community members alike were gathered in the Hiller Midfield Commons of the Duncan Student Center. They were not gathered for club meetings, group projects or to find a place to pass time, as the center is often used on a typical day. Instead, people flocked to Duncan last Sunday to watch the Notre Dame women’s basketball team take on the Baylor Lady Bears for the national championship title in the 2019 NCAA tournament.

The Photo of the Week this week comes from a moment late into this communal watch of a game we now know as a heartbreaker.

After trailing for a majority of the first half, the Irish made a righteous comeback through the second, closing the 17-point gap to tie the game 74-74 with about five minutes remaining. With just 1.9 seconds left in the game, senior buzzer-beater phenom Arike Ogunbowale drew a pivotal foul.

The reaction seen in this photograph is the audience, two or three people deep even on upper levels, watching Ogunbowale miss her first free throw. She made her second, but Notre Dame was unable to recover the ball after Baylor possessed it. The final score was 82-81, Baylor.

In the days since, the starting five — Marina Mabrey, Jackie Young, Bri Turner, Jessica Shepherd, and Ogunbowale — have expressed some regret over the loss. But the week wasn’t all bad: Each of the five starters was selected within the top 20 slots at Wednesday night’s WNBA Draft.

Despite NCAA defeat, these seniors aren’t finished yet.